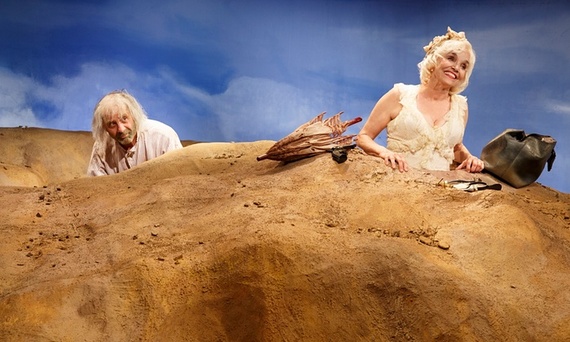 The setting evokes a post-apocalyptic world where a shrill bell tells them when to wake and when to sleep. Winnie (Adams) is the primary focus. She's buried up to her waist in sand, yet forces herself to maintain an upbeat demeanor, ignoring what she cannot control.

Taking consolation in a daily routine -- brushing her teeth, applying her lipstick -- Winnie prattles on about an array of subjects, her frequent refrain: "Oh, this is a happy day." Some moments underscore Beckett's black humor, comic in their absurdity. Others are meditations on the rueful nature of aging and the paralysis that blights a marriage once passion and love have flagged.

Winnie tries, despite the odds, to accentuate the positive, though her slim comforts are running out. The tiniest moment of relief elicits a wide smile. She greets each hellish day with: "Ah well -- no worse -- no better, no worse -- no change -- no pain -- hardly any -- great thing that!"

Conversely, her husband Willie (Shalhoub) spends most of his time either behind her or burrowed into a hole. He is a remnant of a man, subsisting on laconic sentences and grunts. His one concession to individuality: the occasional dapper positioning of his straw boater hat.

It's Winnie's show -- though Shalhoub gives Willie his due -- and Adams holds our attention. She imbues her nuanced performance with a rueful sweetness, taking consolation in the ordinary. Her indefatigability, at least till act two, is striking. But misery, which stalks her daily, remains. Just when you think things can't any get worse, they do.

Her take, and that of the director, is literal. This isn't a macro interpretation of humanity's struggles, much like the dynamic Happy Days production starring Fiona Shaw at BAM in 2008. Here, director Andrei Begrader takes the micro approach: It's prosaic.

Ambiguity and passivity, sorrow and disappointment mark Winnie's existence -- and by extension our own. Finally, love becomes, in part, her weapon against despair. It may be all that makes an unbearable life bearable.