Ever since Steel Magnolias and its story of sassy Louisiana women hit the stage, New Yorkers have been intrigued with big-haired, bighearted Southern women. Robert Harling's play focused on a true story -- the death of a beloved sister -- and how friendship and humor sustained his family. Each night, audiences met six unforgettable women in Truvy's beauty shop -- and laughed till it hurt. Southern storytellers have a singular gift for home and heart -- and the latest effort to celebrate women's lives is the musical Good Ol' Girls, now playing at the Black Box, at The Harold and Miriam Steinberg Center for Theater, in Times Square.

Co-writer Lee Smith, a Virginia native, is the author of 15 books, including Fair and Tender Ladies and the upcoming Mrs. Darcy Meets the Blue-Eyed Stranger. Her novel The Last Girls was also a New York Times bestseller. She shares her thoughts on Southern life and times and transforming memorable characters into musical theater:

What is a "good ol' girl?"
The "good ol' girl" is an American workingwoman with certain character traits and attitudes. Think Norma Rae, think Loretta Lynn's "You ain't woman enough to steal my man." She's got spunk, humor and independence; she's strong, smart, outspoken, and often, too trusting. She knows that big hair and a big heart do not mean a small mind. She's often hell-raising and cares deeply. Sometimes, she settles down to become a "good woman"-- raising three kids, running a beauty salon out back of the house, baking pies from scratch, clipping coupons, following NASCAR and teaching an aerobics class called "Jumpin for Jesus" at her church. You don't want to cross a good ol' girl. She'll bring you a casserole, but she'll kill you, too.

Isn't she Southern, by definition?
Well, not really. She might live in Durham, North Carolina, or Akron Ohio, or Denver, Colorado, or, well, anywhere. My co-writer Jill McCorkle (the author of five novels and four short-story collections, including Going Away Shoes) described the show as "women of all types and ages in all different places coming to terms with some big issues in life." Our characters don't shy away from these issues, either, such as love, marriage, pregnancy, work, abuse, faith, family and aging. These are not Southern issues. These are universal.

How would you describe this musical?
"Virginia Woolf meets Dolly Parton!" It has been called "a feminist literary country music revue." It's a show with a lot of attitude, but it's really an affirmation of womanhood, ranging from childhood to the nursing home, bright futures to fading glories. You can see all the women you have known and loved. You might even see yourself.

Five writers for one musical? Isn't that a bit unusual?
Maybe, but Good Ol' Girls has been an honest-to-God, true collaboration. Over in Nashville, singer-songwriter Matraca Berg wrote a song named "Good Ol Girls," and came up with the concept for a musical. She called legendary rocker Marshall Chapman, one of my oldest friends, and they called me and asked if I wanted to write a play. It took me about five seconds to forget about my novel-in-progress and say, "I'm in!" I'd been fantasizing about a musical for years -- something like A Chorus Line for women. Practically every character I've ever written is a good ol' girl. I roped Jill McCorkle in for more kick-ass contemporary voices, and we were in business. Almost. A stack of monologues and CDs is not a show. We asked North Carolina playwright and director Paul Ferguson to adapt our material -- and he made it theater. 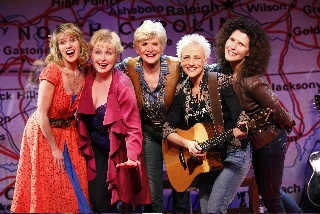