Judy Gold is aptly named. She has mined her childhood angst for comedic gold, seen through the prism of classic 1970s sitcoms in The Judy Show, now at the DR2 Theater. A laugh-out-loud riot, it packages decades of Gold's kooky, crazy and occasionally poignant memoir into a clever, insightful 80-minute production.

The stage, filled with various TV screens and a piano, is a blast from the past. Gold, who grew up addicted to TV sitcom families, pined to be part of The Brady Bunch and The Partridge Family. Indeed, she gets her social cues and emotional longings fulfilled in these half-hour fantasies. That's why she yearns for her own show. 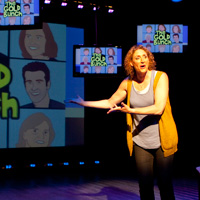 Yet despite various network pitches -- which she introduces with parody theme songs -- she doesn't land her dream job: starring in her own TV show as a lesbian mother of two boys on the Upper West Side. The executives are tone-deaf; they simply don't click with her vision. Even Oprah's OWN, billed as inspirational TV, let's her down.

TV's loss is the theater's gain.

A lonely Jewish kid in Clark, New Jersey, Gold posits her pain in such frank, honest and hilarious terms, it's impossible not to wish TV execs shared her dream. En route, we meet her parents, particularly her mother, a mighty, albeit unbilled, collaborator in Gold's comedy. The Judy Show is the journey of both mother and daughter; it's the ultimate laughter-through-tears tale.

Yet Gold is undeterred -- she soldiers on through broken dreams and a broken heart -- to take audiences on a funny and fantastic ride through one woman's internal laugh track. Gold, who had a hit off-Broadway show in 25 Questions for a Jewish Mother, has reunited with her co-writer, Kate Moira Ryan, to produce another hugely entertaining show.

Aided by Amanda Charlton's smooth direction, The Judy Show makes you wish she had her own TV show, but grateful that she's found a home on stage.