On Oct. 9 and 10, The Lord of the Rings: The Fellowship of the Ring hits Radio City Music Hall in a multimedia extravaganza. Howard Shore's Oscar-winning score will be performed synchronized with the hit film, showcased on a 60-foot screen. Conductor Ludwig Wicki will oversee 300 musicians that include the 21st Century Orchestra, which specializes in film music, The Collegiate Chorale, renowned soprano Kaitlyn Lusk and the Brooklyn Youth Chorus. 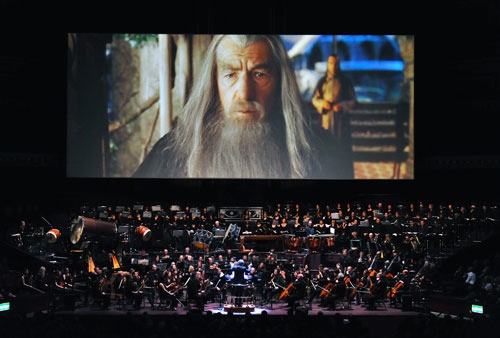 The epic-sized event neatly dovetails with this fall's release of Music of The Lord of the Rings Films, a book by musicologist Doug Adams.

There will be pre-concert talks and post-concert signing sessions with both Shore and Adams. Shore, who wanted to hear the complete score performed live, says it's a unique experience for LOTR devotees. "I felt that I was seeing the music with more clarity and hearing the image in an entirely new way," he says. An added pleasure is the setting--Radio City is among the most magnificent architectural structures in the U.S., a monument to the Art Deco movement.

Adams, a musician and writer who has worked alongside composers Elmer Bernstein (The Magnificent Seven), Danny Elfman (Edward Scissorhands) and Thomas Newman (The Shawshank Redemption), believes film music deserves the same consideration as concert hall and opera works. His upcoming book also includes Rarities Archive, a CD that presents over an hour of Shore's music for LOTR that's never been released on an album.

Adams shared his thoughts on the power of Shore's score:

What information does the book contain?
We examine the music's role in the films' production--the score's conception and execution, Shore's collaboration with the filmmakers, the recording sessions, etc. On the other hand, we scrutinize the music from a Tolkien-centric point of view--how Shore's interweaving thematic structures echo the cultures of Middle-earth.

What makes the LOTR score exceptional?
Often, leitmotif film scores will revolve around a few principle ideas. Shore's music for The Lord of the Rings contains over 90 fully developed leitmotifs, likely the largest thematic body ever assembled for film.

Is the music reminiscent of other great composer's orchestral scores?
Certainly Wagner's Ring Cycle is a relative--in structure, if not in voice. I think you can hear hints of Sibelius' Finnish voice, which is appropriate as Tolkien, like Sibelius, drew inspiration from the Kalevala, an epic poem about Finnish folklore. Also, it could be said to owe something to Mahler, who famously stated, "...the symphony should be like the world: it must embrace everything." Shore's score corrals [various techniques] to paint a thorough portrait of Middle-earth.

What themes does the music address?
The music addresses characters, objects and events--as I say, it contains a little bit of everything in Middle-earth, and shows the audience the important relationships within that world. But it also addresses the story's subtexts: the close relationship between positive obsessions (love for homeland) and negative obsessions (love for objects, greed), the transformative power of heroes' journeys, the beauty and purity in which evil often dresses itself, etc. Shore's themes hit all the beats in Tolkien's drama, but these kinds of thoughtful details take it to a whole other level. That's why it'll be amazing to experience this music live to picture at Radio City. It's the perfect combination of stunning visuals, profoundly moving music, and high-minded dramatic themes. It's really a new art form in a way.

Movies Pop of Culture Entertainment Lord Of The Rings