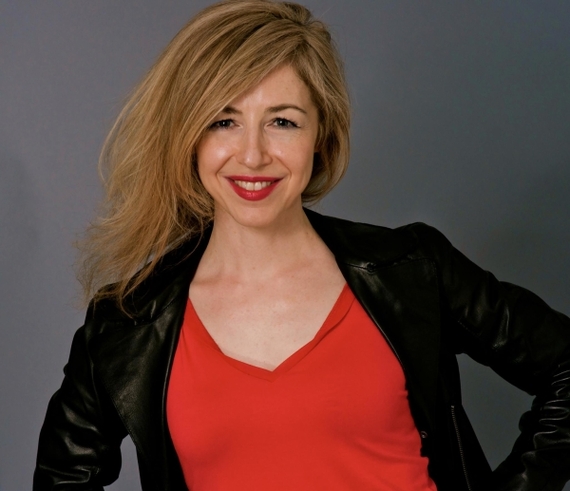 Give it up for Anna Fishbeyn, who manages to turn painful memoir into an insightful, entertaining show.

As noted in My Stubborn Tongue now off-Broadway at the New Ohio Theatre, such efforts come at great personal cost. But such is Fishbeyn's charm -- and her gift for revealing both the humor and heartbreak of Russian-American life -- that her tale is ultimately redemptive.

Her issue is identity -- Russian in America, Jewish in Russia -- and the quest for acceptance that immigrants pursue. That drive is twofold: to illustrate patriotism and embrace a new identity.

The journey begins in 1981; the Soviet Union is considered the "evil empire" by President Reagan, but in a political swap, thanks to the 1974 Jackson-Vanik Amendment, Jews are sent to America in exchange for Russia gaining grain. To apply carries great risk, but the Fishbeyns -- father, mother, aunt, grandmother and Anna -- are granted exit visas and head to Chicago.

There, living in a dangerous neighborhood, her parents and aunt eek out a living at menial jobs, despite their former professional status: dentist, IT director and economist, respectively.

But the horror for Anna is the fear of not fitting in. Schoolchildren and neighbors are often cruel. Ironically, the Fishbeyns are taunted as Communists in America, and persecuted as Jews in Russia. That dichotomy gives rise to Anna's mantra: "assimilation is survival."

As she obsessively persists in learning English, despite the difficulties in the language and its idioms, we witness a fierce determination coupled with the pain of the outsider. The desire to acculturate can mean denying one's roots, a dilemma she presents with humor and poignancy.

Fishbeyn takes audiences on a wild ride through childhood, adolescence, college and its aftermath. Her academic achievements -- B.A. from the University of Chicago, Ph.D from Columbia -- are considerable. As is her family's trajectory, navigating the pathways to American success.

Her mishmash of languages, clever storytelling and character recreations are deft, but certain scenes, such as recollections of Thanksgiving and college dating, could be cut without sacrificing her thematic construct. Losing 15 minutes would tighten her tale, thereby sharpening her talent for memory and moment. So would eliminating the awkward, behind-the-screen clothing changes; director Scott Klavan should devise a smoother transition.

Still, it's worth taking the journey with Fishbeyn, who has not only survived, but triumphed.