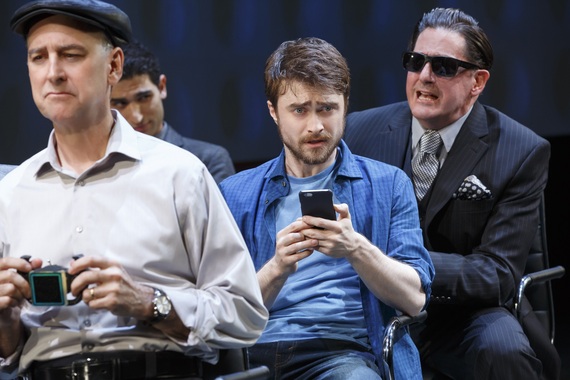 If you fear a police state, look no farther than your smartphone. Your digital footprint is huge. If you have a social-media account, it's over.

Yahoo, Google, Apple, Microsoft routinely share your info with third-party networks and, on occasion, the government. Yahoo and Google are happy to share info with foreign governments, too!

As Privacy, now off-Broadway at the Public Theater makes clear, technology is Big Brother. Only most of the power is in the hands of major corporations. In George Orwell's 1984, the government controlled language, thought and action.

Every call, every photo, every location is known. So is what you buy, where you go, the status of your health and associates. Your Fitbit knows when you're having sex; Siri knows how many people are watching TV in your house.

And all that meta data is stored. The ACLU worries about predictive modeling by police, but advertisers and politicians routinely use it to target voters and swing elections, which can be even more pernicious.

Well, so does the play, starring Daniel Radcliffe, whose considerable talents are squandered in a production that's long on information, but short on dramatic tension. Radcliffe plays a depressed writer searching for his authentic self. But in the digital world, does one actually exist?

Interspersed with the loosely structured narrative are appearances by actors doubling as real-life figures, such as Sherry Turkle, an MIT professor, and Clive Humby, a founder of dunnhumby, the company behind worldwide loyalty programs. All offer insights, arguments and rants about the tech revolution.

Privacy raises crucial issues, but while most people turn on, few are willing to turn off.

While Privacy worries about our digital selves, Who Mourns For Bob the Goon? addresses our fractured selves.

Now playing at the Here Theater, Joshua Young's play is set in a group therapy session among military vets suffering post-traumatic stress disorder. Each has a particular, occasionally harrowing, story to tell.

No surprise, the vets find their experiences difficult to process; haunted by past actions, they take on new personas.

To cope, they identify, in part, with comic characters -- with a catch. They often identity with villains, like the six-armed Spiral, Spectre and Mister Gone, rather than superheroes. One exception, Alison (Jolynn Carpenter) becomes the Dazzler, originally conceived by Marvel Comics as The Disco Queen, with the power to make people tell the truth.

The title character, Bob The Goon (Alex Teachey), is from the Batman movie. He is the Joker's closest friend. Unlike his colleagues, who acknowledge their dual identities, he doesn't separate himself from his fictional character.

But what upends the group is the introduction of Langly (Alicia Goranson), who claims an anime personality. She not only distances herself creatively, her provocative nature threatens the collective therapeutic future.

The play posits an intriguing premise, aided by clever projections, to explore the mind's fragility. Fans of the comic characters will appreciate their various manifestations. There is good stuff here, but in need of editing. The final two scenes are unnecessary and drain an otherwise interesting, ably performed work of its energy.