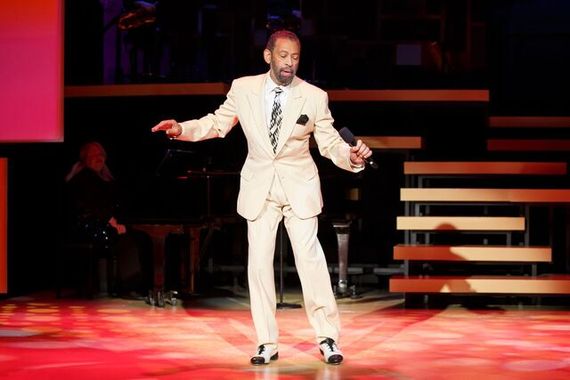 There is much to be said about taking a show-biz sentimental journey, especially when your guide is the great tap dancer/choreographer Maurice Hines.

From narrating his beginnings in Harlem to his Broadway success, Hines proves a charming presence. His Tapping' Thru Life, now off-Broadway at New World Stages, is an emotional ride through post-war entertainment, artistry, segregation and family.

Along with his late brother, Gregory, the Hines Kids were featured on some of the biggest TV shows of the 1950s and '60s, such as "The Tonight Show," while also playing the big clubs in Las Vegas. They met and worked with Frank Sinatra, Dean Martin, Ella Fitzgerald, Lena Horne and Judy Garland, among others.

Indeed, their resume reads like a Who's Who of American music. But it's not just the celebrities or anecdotes Hines invokes. The beauty of this 85-minute show is the song-and-dance numbers selected to punctuate his singular life.

Early on, it's the bump-and-grind the brothers learned from their grandmother -- "a Cotton Club showgirl who dated Cab Calloway and Duke Ellington, but by the time we were born, she'd found Jesus"-- and the moves from noted dance teacher Henry LeTang. Hines recreates these memories and moments with elan.

Later, the 72-year-old shows he's still got it, sharing the stage with his discoveries, including John and Leo Manzari, a pair of tap-dancing siblings, and wunderkind Luke Spring. All carry on Hines' legacy.

Augmenting his narrative is an extraordinary photo collection of his career, as well as elegant shots of his parents, strong influences on his life.

His Tony-winning brother died in 2003, and the tribute to him is moving.

But what's most wonderful about Tappin' Thru Life is the joy Hines gets in retelling his career. His humor and warmth are infectious.

Seamlessly directed by Jeff Calhoun and backed by the swinging Diva Orchestra, a talented troupe of nine female musicians, the show is a celebration of tap, as well as a time and place in American history when true giants ruled the entertainment business.

It's a privilege to spend time with Maurice Hines.