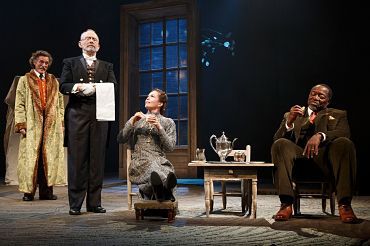 In the case of The Cherry Orchard, the Broadway revival now at the American Airlines Theater, the key is to retain sympathy for Chekhov's characters -- decadent aristocrats, materialistic bourgeoisie, student revolutionaries and serfs -- while retaining empathy for their specific circumstances.

Actress Ranevskaya (a centered Diane Lane), the self-absorbed lady of the bankrupt manor, and her brother Gaev (John Glover), are forced to sell their estate and beloved orchard. Aristocratic wealth and power are changing; a middle-class is slowly emerging.

Chekhov portrays the socio-economic class wars at a crucial crossroads in Russian history. Ranevskaya, who has returned from Paris, misses her childhood home, but is ill-equipped financially to save it. Neither can Gaev, an eccentric more obsessed with billiards than the bottom line.

It is Ranevskaya's children, Anya (Tavi Gevinson) and Varya (Celia Kennan-Bolger), who will pay the higher price for parental ineptness. So, ultimately will Firs (Joel Grey), an elderly servant nostalgic for grander times.

Yet in this updated version, the empathy is absent; and the 21st-century script underwhelms. Stephen Karam's revamp robs it of emotional depth, while Lopakhin, a business man eager to buy the estate, is played by Harold Perrineau like an aggressive Manhattan broker pressuring a client to close a deal.

In short, Karam lacks subtlety, which lessens the overall emotional impact of Chekhov's masterwork, this time rendered by a multiracial cast.

Revising period pieces can bring added meaning to a new generation of theatergoers. True, Chekhov's language can be tough and names confusing, but this production, despite Lane's best efforts, is stripped of its essence. That leaves both audience and orchard decimated.

On a more upbeat note, The New Victory Theater is staging a super creative and joyful Mr. Popper's Penguins, based on the 1938 book. Mr. and Mrs. Popper live in the town of Stillwater. Mr. Popper is a friendly house painter, who quietly bemoans his drab life. The one bright spot: He is enthralled by explorers, especially Admiral Drake, stationed in the South Pole.

One day, Mr. Popper writes him a fan letter. A few weeks later, Mr. Popper receives a surprise package -- a penguin he dubs Captain Cook. Captain Cook is growing, but his health is failing. The solution? Get him a mate -- and the Popper household is never the same!

Brought to the stage by the UK's Pins and Needles Productions, Mr. Popper's Penguins is a 55-minute musical romp. It's funny, warm and unbelievably touching. It whimsically proves families come in all shapes and sizes, as do dreams.

Also found in the never-enough category: George Gershwin. Specifically, The National Chorale and The National Chorale Orchestra's A Gershwin Celebration at Lincoln Center on Oct. 20. It's unusual to hear Gershwin's glorious Broadway numbers, such as "Let's Call The Whole Thing Off" and "Stairway to Paradise," in chorale mode.

And it takes some adjusting -- but it worked.

Led by Everett Mccorvey, the orchestra magnificently performed "Rhapsody in Blue," a reminder of how remarkable the music was and is. (Gershwin had an interest in arranging the piece for full symphonic chorus and even wrote a few parts for a wordless choir before his untimely death.)