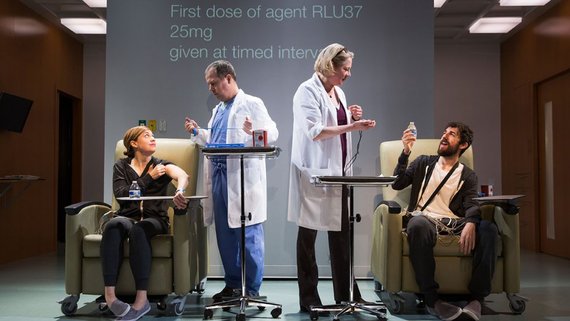 A science experiment is the antithesis of drama: It's studied, repetitive and seemingly objective in its results. The off-Broadway drama The Effect, now at the Barrow Street Theater, has two people taking experimental anti-depressants.

The provocative twist: they fall for each other. But is it true love or the effect of high-dosage mood elevators?

The premise is clever -- and director David Cromer has a track record of brilliant conceptions -- but the production, despite excellent performances, doesn't quite click. Author Lucy Prebble raises an important issue about chemistry -- real and manufactured. And she's right to question the motives of profit-seeking doctors and big pharma.

Connie (Susannah Flood) is a young woman involved in a relationship. She meets hyperactive, hyper-emotional Tristan (Carter Hudson) in a drug trial. They are explicitly told by Dr. James (Kati Brazda) not to get involved or have sex -- an order they quickly ignore. It's a strange attraction: He's not an exciting or particularly interesting guy. Demanding, yes. Alluring, no.

Yet embark they do, much to the consternation of Dr. James and her smug colleague Toby (Steve Key), whose company is administering the medicine. Seems everyone has a backstory here -- and none of it is pretty.

While Cromer has a sharp cast, the plot is iffy. The Effect is a great premise for a serious discussion on why drug therapy may or may not work and the possible social consequences that follow. But as dramatic fodder, it's a hard pill to swallow.

Heightened emotion is also a big part of Stupid Fucking Bird, now at the Pearl Theatre Company. It's billed as a "sort of" adaptation of Chekhov's The Seagull. If by "sort of" you mean an updated version with the same characters and plot twists.

Conrad (Christopher Sears) is an aspiring playwright. He's overheated, overwrought about theater and besotted by Nina (a solid Marianna McClellan). His mother, Emma Arkadina (a terrific Bianca Amato), is a famous actress involved with Trigorin, a noted writer (Erik Lochtefeld).

Conrad's modernistic play, which features Nina, doesn't impress his mother. He's jealous of Trigorin and isn't afraid to share his feelings -- with the audience. In fact, he breaks the fourth wall, asking them how to win over Nina.

The obvious answer: Write a better play and consider medication. Few women are successfully wooed by incessant whining, either here or in the original.

Written by Aaron Posner, who did a superb adaption of Chaim Potok's My Name Is Asher Lev, the play captures Conrad's familial and artistic frustration and torment, as well as his drive to create a new art form, a key Chekhovian concern.

Conrad makes cogent points about the state of current media. And yes, he feels compelled to kill a seagull.

Posner, like Chekhov, explores theater's relevance, aided by Sandra Goldmark's pop graphics. Plus, he follows the classic's trajectory. It's an interesting effort. But the feverish pitch means there is more attention paid to rants than revelation.