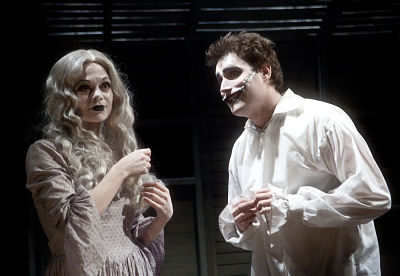 The Stolen Chair company's The Man Who Laughs, is a remarkable achievement. A stage production performed as a live silent film, this captivating multimedia effort is freely adapted from Victor Hugo's novel. The twist -- and it's a big one -- is playwright Kiran Rikhye's script.

Rikhye utilizes some of Hugo's characters and setting, the late 17th century, but she's transformed them into a tale of Chaplinesque sensitivity and heartbreak. Many stock figures of silent film -- the vamp, fop and clown -- are here. But this story of cruelty and compassion, which marries commedia dell'arte and silent cinema, centers on Gwynplaine and the tragedy that defines his life.

Now playing at Urban Stages, a charming 60-seat off-off-Broadway house, The Man Who Laughs, is a triumph of stylized acting and directorial artistry.

Gwynplaine (Dave Droxler) is abducted as a child by the "comprachicos," who carve his mouth into a perpetual grin to exploit him as a carnival freak. Eventually abandoned on a wintry night, he rescues a blind baby and throws them both on the mercy of Ursus (Jon Froehlich), holed up in a caravan.

The economical story, told in a series of projected title cards flashed on a scrim, quickly fast-forwards two decades. Dea, the girl (Molly O'Neill), is now a beauty. She and Gwynplaine share a special bond. He yearns to be more than an object of comedy or ridicule. Ironically, because she cannot see him, her love is pure.

They survive as sideshow performers, thanks to Ursus' training. Their marionette routine is magical, and one of the evening's highlights.

Because The Man Who Laughs is performed as a silent film, each element has to click. Poignant music accompaniment by Eugene Ma adds to the illusion, while Michael Minahan's set design, Daniel Winters' lighting and Jaclyn Schafer's makeup create a soulful beauty that is unforgettable. Julie Schworm's costumes complete the visual architecture.

The cast is uniformly wonderful; Droxler and O'Neill evoke great chemistry on stage and imbue their roles with an aching tenderness. The silent-era style is a tricky one to emulate, but Jon Stancato's cohesive direction neatly pulls it off. The Man Who Laughs is inspired stagecraft.