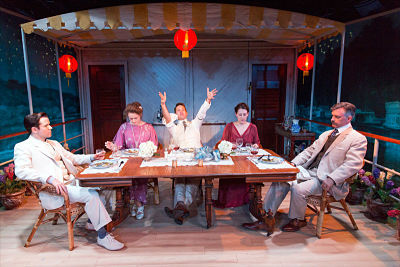 Infidelity and social standing, public ridicule and private misgivings are the stuff of drama. Or, in the case of the The New Morality, a restored British comedy of manners, subjects of tart scrutiny.

Now at the off-Broadway Mint Theater, renown for reviving lost works, the 1911 Edwardian play, the handiwork of Harold Chapin, a witty playwright killed in World War I, blames the unseasonably hot weather for misbehavior.

The action takes place on a houseboat on the Thames. The setting may be serene, but beneath the surface, there is a tidal wave of emotion.

In fact, as Betty Jones (a wonderful Brenda Meaney) points out to her wandering husband Ivor (Michael Frederic), who has been dancing attention on the unseen Mrs. Wister all summer, he's embarrassing himself.

And by proxy, causing her distress. Betty, a New Woman of the burgeoning 20th century, is unlike her Victorian predecessor. She understands infidelity, but she will not tolerate a spouse who is indiscreet. Has he no self-respect?

Yet when Betty berates Mrs. Wister for ordering her husband about, treating him as a lapdog, the latter's husband (Ned Noyes) demands an apology! And if he fails to get one, he politely explains, he will be forced to sue for slander.

The New Morality pokes fun at men who don't understand the nature of strong women, while taking their idiot assumptions about their wives to task. Here, sexual politics abound, both its hypocrisies and the twisted nature of social progress.

Tightly directed by Jonathan Bank, the play takes time to grab audiences, given its leisurely pre-war pacing, but Steven Kemps' sets and Carisa Kelly's costumes are spot-on. So are the performances, aided by Clemmie Evans, Christian Campbell, Kelly McCready and Douglas Rees as the indispensable servant.

Chapin's satire isn't as biting as Oscar Wilde's, but he still hits his mark. A literary successor to Wilde's jabs at upper-class life, The New Morality is a gentle entertaining comedy with a pointed edge.