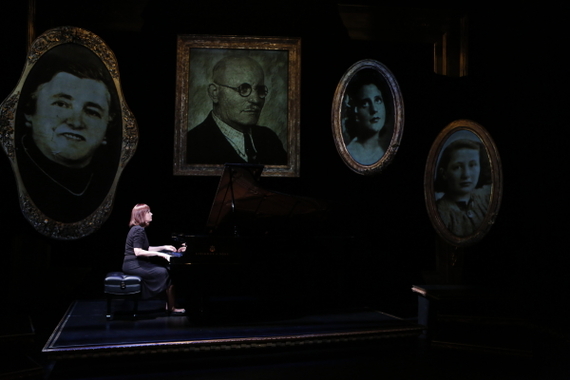 Mona Golabek's tribute to her mother's experience in the Kindertransport, a rescue mission that sent Jewish children to Britain prior to WWII, is mesmerizing. The Pianist of Willesden Lane, a story of bravery and survival now at 59E59 Theaters, should be required viewing. Its power resides in its personal simplicity.

The true story of Lisa Jura, a gifted 14-year-old Austrian pianist who once dreamed of debuting in Vienna's famed Musikverein concert hall, reveals Nazi horrors, as well as the power of music to sustain the human spirit.

The story of the Kindertransport, in which 10,000 German, Austrian, Czech and Polish children were sent to England, is compelling. They were housed in both Jewish and non-Jewish homes; the difficulties the children faced, both emotional and cultural, were enormous. Yet in the ensuing years, many would go on to great accomplishment; four became Nobel Prize winners.

Often, history is more meaningful when told via memoir. That's the greatness of Golabek's solo show, which co-mingles tragedy with triumph. Through Jura's eyes, we experience the Nazi persecution of the Jews and the ensuing war years. Hers is one of many such stories. But as a symbol of implacable resistance -- and of the kindness that can emerge in the face of overwhelming cruelty -- it cannot be missed.

When Jura leaves Vienna in 1938, in a searing parental decision following Kristallnacht, her mother implores her to "hold onto your music." In fact, the young girl's passion for classical music is sustained by a fierce determination. Her commitment is encouraged by Mrs. Cohen, who runs the crowded London hostel on Willesden Lane, and many of the refugee children it houses.

Because music is so essential to the story, Golabek plays the song list that held meaning for her mother. Various Grieg, Debussy, Chopin, Bach concertos -- all performed exquisitely on a Steinway -- help chronicle her remarkable journey.

Jura's relentless commitment to her music is astounding. As the others huddle in a nearby basement during the Blitz, she is practicing her piano. As bombs drop, the image of a lone girl playing her beloved Grieg in A minor is humbling, a testament to inner strength.

No one can doubt the importance of the arts to human dignity and endurance after seeing The Pianist of Willesden Lane.

What makes Pianist so moving is Golabek's superb skills as both storyteller -- she reenacts every role -- and as an acclaimed pianist.

To augment Golabek's narration, directed by Hersey Felder with sensitive restraint, are Andrew Wilder and Greg Sowizdrzal's projections of Jura's family, Jewish life in Vienna, the Blitz in England and the Normandy landing. Erik Carstensen's sound design is perfect.

Jura's dramatic odyssey from pre-war Vienna to post-war London, based on Golabek's 2003 book The Children of Willesden Lane, is riveting. Golabek has created an excellent, deeply moving tribute to her mother -- and to the memory of the Kindertransport.