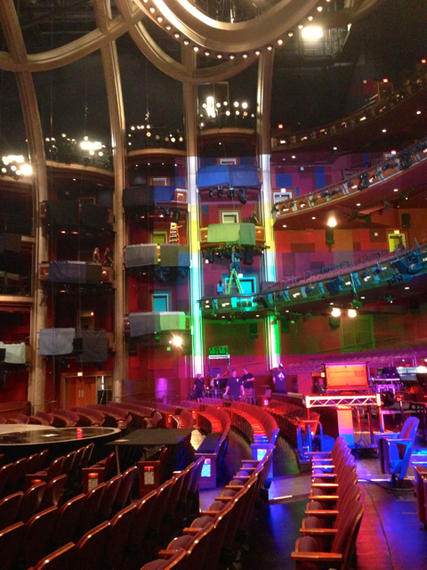 "SU2C at The Dolby Theatre."

What would you do with a stage three-cancer diagnosis? Mope? Grieve? Surrender? It's devastating and paralyzing. It quickly snuffs out hope and threatens your joy. It murders you figuratively and sometimes takes you literally. But greatness is often born in the darkest of times, and hope manages to elbow its way through. Laura Ziskin didn't run from her stage three-breast cancer diagnosis. She didn't hide and she didn't give up. She fought it fiercely for seven years. She looked cancer directly in the eye and she started a movement with eight other women. The Movement of Stand up to Cancer.

On Sept. 5th Stand Up To Cancer (SU2C) embarks on its fourth biennial multi- network telecast to raise funds and bring awareness to the fight against cancer. Donations fund SU2C's "Dream Team" grants, which are awarded to multi- institutional groups of scientists who work collaboratively, rather then competitively, to develop new treatments quickly in order to save lives now. These telecasts help provide a national forum to educate about cancer prevention and engage the public in supporting research that is helping more patients become long- term survivors.

Laura Ziskin wanted to create a patient-centric movement. "She felt the country needed it not just for herself, but for all patients to get better treatment faster," Pamela Oas Williams, Laura's producing partner for twelve years and Stand Up To Cancer's in house Executive Producer reflects. "For me Stand Up To Cancer is about bravery and courage, very specifically Laura. It's also the bravery of these scientists aligned with us. Yes, we can do it faster and we can do it better. We will come alongside a bunch of women from Hollywood, and some people thought we were crazy, but six years later it's working."

The fourth broadcast will have elements of the traditional celebrity driven telethon including inspiring cancer survivors tackling their fights head on as well as amazing musical performances. We will meet the cutting edge scientists and doctors who are on the front lines battling this horrible disease, and this year there will be a twist on the celebrity phone bank. The old school star-studded phone bank has been updated and transformed into a technological and social media driven digital lounge. This time the celebrities will contact you, and not only by phone. You could receive a Facebook post, a Tweet, or an Instagram photo. They will be reaching out to personally thank you for standing up.

Stand Up To Cancer is Executive Produced by Joel Gallen, who helmed the 2012 telecast after Laura's passing. He also produced "America: A Tribute to Heroes" and "Hope for Haiti Now: A Global Benefit for Earthquake Relief." "Cancer is such a day to day thing we are all affected by," Gallen says. "For everybody who tunes in and watches the show, it is hard to imagine that they don't have a friend or relative that has had cancer or they have lost to cancer. The challenge for me as producer is to motivate people to give. To educate and inform people that your contribution will help us get to the finish line. To save more lives, to extend more lives with these breakthrough treatments."

Cancer. It's one tough customer. It's resilient and strong. It doesn't discriminate. It doesn't care what color you are, what religion you practice, or if you are young or old. It doesn't care if you never traveled the world, got married, had a child, or even made it to kindergarten. It doesn't care if you are a mom, dad, or grandparent. At times it sneaks up and taps you on the shoulder in a slow crawl; other times it surprises and leaps with all its might. It grows quickly or slowly. It's strategic and smart and it is engulfing many of our loved ones like a thick oil spill seeping over all the beauty and joy that we hold dear.

As a TV Producer I don't get to participate in a project this meaningful very often, and I am honored to be a part of the SU2C telecast for the second time. I, too, have had family and friends who have been overtaken by cancer and are surviving it day to day. But the image that comes to my mind when I think of Stand Up To Cancer is the beautiful and courageous Hillary Quinn Kind, who was featured on the 2012 show and sadly lost her battle to melanoma days shy of her twenty-sixth birthday.

But there is hope. There is a light at the end of the tunnel and Stand Up To Cancer is leading the charge to help eradicate this epidemic from our world. So on September 5th, let's give cancer our best left-hook and knock it off its feet. Do it for Laura, for Hillary, for your husband, your best friend, or yourself.

Stand Up To Cancer is a program of the Entertainment Industry Foundation, and the telecast is produced by Tenth Planet Productions.