Michael Dunn shot 10 bullets into a car filled with four teenagers after a dispute over the volume of their music. He claimed self-defense, though the gun he said he saw was never corroborated by anyone or found. This weekend he was found guilty of attempting to kill the three teenagers who survived, but not of murdering the one he shot dead, 17-year-old Jordan Davis.

When George Zimmerman was acquitted of the killing of Trayvon Martin, I put up a post reviewing a study on stand your ground laws. The research found that these laws increase the likelihood that a homicide will be considered "justified," but only in cases where a white person is accused of killing a black person. Here is the data: 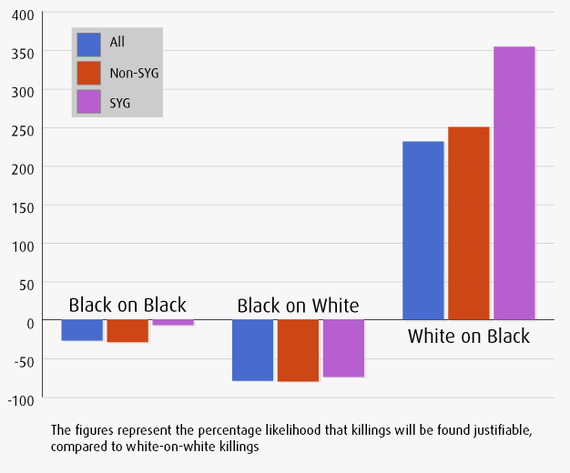 At the previous post, I argued that these data -- made to feel real by decisions like these -- show that we are "biased in favor of the white defendant and against the black victim." Stand your ground laws make it worse, but the far right column shows that:

Or, to put it more bluntly, we still value white men's freedoms more than black men's lives. On average, of course.