The battle for marriage equality is about to spill out of the political arena and into the dramatic one, thanks to a group of prominent playwrights and stage actors.

On Monday, more than 40 theaters in 25 states will host "Standing on Ceremony: The Gay Marriage Plays," the Tectonic Theatre Project's collection of eight 10-minute "microplays" written by some of the most acclaimed writers in contemporary theater, from "The Laramie Project" scribe Moises Kaufman to Doug Wright, a Pulitzer Prize winner for "I Am My Own Wife."

The New York production, to be staged at Manhattan's Minetta Lane Theatre, will also feature a bevy of high-profile Broadway, TV and film talents, with "Sex and the City" alum Craig Bierko and "All My Children" star Mark Consuelos joining forces with Tony Award winner Harriet Harris ("Thoroughly Modern Millie") and other performers. To unite the New York cast with those involved in the regional productions across the country, an introduction and a post-performance Q&A will be streamed live from the Minetta Lane Theatre stage.

No doubt, parallels will be drawn between "Standing on Ceremony" and "8," Oscar winner Dustin Lance Black's play about California's Proposition 8, which hit Broadway for a glitzy one-off performance in mid-September. But Kaufman, no stranger to tackling LGBT themes in his work after "Laramie," said his goal was to dramatize the subject of marriage equality in a more "humanized" way than had been done previously on stage or in film, and from the perspective of gay and lesbian, rather than heterosexual, characters.

"You can look at this issue from a political perspective, a cultural perspective or a civil rights perspective," said Kaufman. "So much of this conversation has taken place in the realm of politics at the national level. ... I thought this was a great opportunity to show the other side, the repercussions for LGBT people."

The microplays -- which range from "The Gay Agenda," a comic portrait of a Focus on the Family member, to "On Facebook," which Wright adapted from an actual Facebook thread on the subject of gay marriage -- made their debut in Los Angeles earlier this year. In Manhattan, they will be seen by an arguably liberal audience, with New York having become the sixth U.S. state to legalize same-sex marriage this past June.

But Bierko hopes the performances will be just as moving in more traditionally conservative regions of the country. Although producers will donate a portion of all ticket sales to the advocacy group Freedom to Marry and other organizations promoting marriage equality, he said the cast and crew aren't striving to promote any specific point of view on the subject.

"I think it would've been a misguided effort if both sides of the argument weren't represented," said Bierko, who counts the lead in the 2000 revival of "The Music Man" among his Broadway credits. "It's extraordinarily entertaining and laugh-out-loud funny, regardless of your point of view. ... Even if you're a strong advocate for LGBT rights, there are complications within that world you have to consider when it comes to the marriage debate. People are complicated."

Those complications lie at the core of one play in particular, "My Husband," which takes a particularly unorthodox look at same-sex marriage in portraying a devoted mother who desperately wants her gay son to wed, even though he doesn't have a partner. "I wanted to explore the new social pressures that surround gay people [in the aftermath of legalizing same-sex marriage]," explained writer Paul Rudnick. "You can't just be gay anymore; you have to register china and stemware."

Rudnick added, "A play is more fun than an op-ed piece because you can portray every single point of view."

Although the creative team is quick to tout the production's more comedic elements, others insist there will be more than a few tears, too. "The night is full of surprises," quipped a mostly tight-lipped Consuelos, who, along with wife Kelly Ripa, has actively supported the Trevor Project and other LGBT organizations. "I'll leave it at that."

For more information on "Standing on Ceremony: The Gay Marriage Plays," click here.

VIEW photos of the cast and creative team: 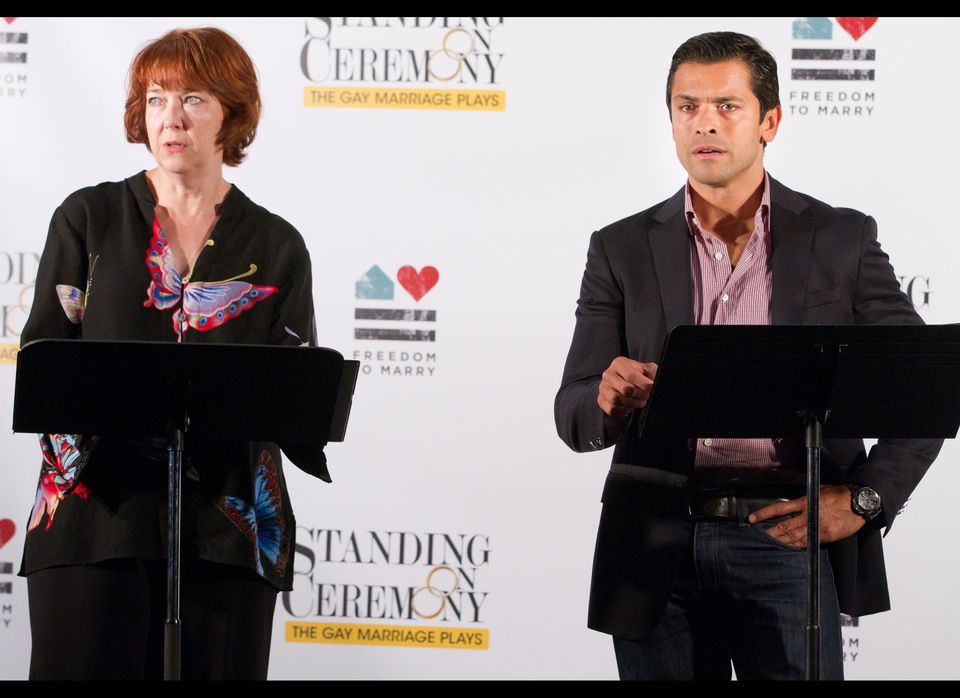