This Sunday, May 17 at 9 pm ET, the PBS World Channel will begin its national broadcast of Standing on Sacred Ground, starting with "Pilgrims and Tourists." The next three episodes will run weekly on Sundays at 9 pm with "Profit and Loss" on May 24, "Fire and Ice" on May 31, and "Islands of Sanctuary" on June 14. This is a national broadcast, but local stations are showing the three films at different times. The broadcast times and dates are listed here if you do not get the World Channel.

In the premiere episode, viewers take a virtual pilgrimage to the Uch Enmek Mountain in the Russian Republic of Altai. There, native people created their own mountain parks to rein in tourism and resist a gas pipeline that would cut through the Golden Mountains World Heritage Site.

You don't have to visit Russia to have this experience.

"Pilgrims and Tourists" also reveals footage of traditional ceremonies of the Winnemem Wintu in northern California. They are resisting government plans to enlarge one of the West's biggest dams, which would forever submerge sacred sites critical to their culture and way of life.

There is a similar Midwestern precedent in the story of the damming of Lake Sakakawea.

Lake Sakakawea encompasses 155,000 acres of Fort Berthold reservation land in North Dakota. The 1947 Garrison Dam Project flooded the bottomlands of the Missouri River and completely obliterated many of the long established Indian population centers of the reservation. Before the reservoir was built, 289 out of 357 households were located in the reservoir area. The current resident Indian population of Fort Berthold is approximately 3,776, with an enrolled population of 9,500. Many moved away after the "takings" of the Garrison Dam Project destroyed culture, fertile growing lands, and a sense of place. 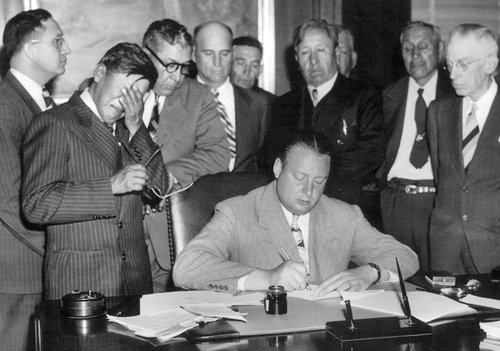 When Three Affiliated Tribes Council Chair, George Gillette, was coerced into signing off on the takings of the Garrison Dam Project. Gillette wept uncontrollably as he signed the agreement.

Wherever you live in the United States, it is likely that you are within a short drive of sacred ground. You may be standing on it as you read this. But the threats to sacred lands are global. The premiere of Standing On Sacred Ground is a stern warning about what the world stands to lose in the pursuit of infrastructure and profit.

The filmmakers risked their lives to develop this series. While reporting that five million tons of toxic mining wastes are being dumped into the ocean in Papua New Guinea by a Chinese government nickel mine, the film crew was detained and questioned at gunpoint in a shipping container.

All that is sacred is local. None of us are untouched by the possibility of deep loss.

Winona LaDuke lives on the White Earth reservation, just up the highway from the small Minnesota town where I spend my summers. LaDuke, Former Vice-Presidential candidate for the Green Party in 2000 is featured in this film. Having seen first hand what she and Honor the Earth have done to protect sacred lands in Minnesota, Canada, the Dakotas and elsewhere from mining, big oil and reckless development, her statement in the trailer for Standing on Sacred Ground carries a lot of weight for people in the Midwest. It is at once political and deeply spiritual.

We end up with a belief that is doesn't matter what we do here, because salvation is someplace else. So, let 'em mine. Let 'em dam.

This film speaks far beyond the threats facing indigenous people. In some ways, Native cultures are the unheralded guardians of all that is holy on the planet.

Get engaged with this thoughtful series. Organize a screening party or two. What better way to begin the season of outdoor exploration than to gain an appreciation of the spiritual beauty of the planet?

There is no place on the planet where indigenous people do not face dire threats to sacred lands. Consider the Fort Laramie Treaty here in the United States, which has been dishonored. Imagine what is happening in remote areas of the world where treaties are a non sequitur and resource extraction is God.

Visit the Midwest where the borders of Minnesota, Iowa, The Dakotas, and Nebraska meet; take some time to abandon the interstates and encounter the sacred. Detour to Wind Cave. Listen to the wind and feel it as it moves across your skin. Wind Cave National Park, or "Washun Niya," is literally the believed to be the breath of Mother Earth by the Lakota people. The people were born there and emerged into the world at the invitation of the trickster and have regretted leaving ever since. Move on to Devils Tower, known to indigenous people as Grey Horned Butte, a short drive away from Rapid City. It is also sacred to the Lakota People.

Take a lazy drive north and visit Knife River Indian Villages in central North Dakota, where the activities of an ancient earth lodge civilization are still visible in the undulating earth. The Midwest is rich with uncounted buttes, trails and grasslands that shelter the sacred. Thunder Butte near Fort Berthold North Dakota is now threatened by fracking in the Bakken Oil Fields.

Standing On Sacred Ground shows us eight indigenous communities around the globe who are standing as witnesses and protectors in defense of their creation stories.

Their stories are our stories.

Narrated by Tantoo Cardinal, Q'orianka Kilcher and Graham Greene, this series teaches how nature and culture are completely intertwined and offers a blueprint for holy living.