In an interview with the New York Times on the eve of the release of his new book United: Thoughts on Finding Common Ground and Advancing the Common Good (Penguin Random House), Senator Cory Booker said something that was both revealing about his character and illuminating about his worldview. "I seek true stories that inspire..." the Junior Senator from New Jersey said, responding to a question about his favorite genres of literature. This could have been a buried statement. But for those involved in social justice activism, there is a lot to be discerned in this self-conscious statement, most noticeably its aspirational quality. In an economy of these simple words, Senator Booker laid out at expansive panorama of meaningful action, of social justice, of heart and soul. It was in these words that Senator Booker did something unique for a political tome: he not only laid out the thesis to his recently released book, he also revealed the underlying ethos of his profession: to inspire. 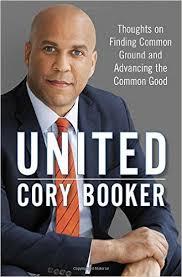 I think it would not be hyperbole to write that Cory Booker is one of the key figures for justice and forthrightness in America today. His history (as detailed in the book), from a football player in high school, to excelling at Stanford and Oxford before pursuing a degree from Yale Law School, all point to someone who could easily rest on the laurels of a distinguished resumé.

But this is not the case. This was not enough. Rather, throughout the book, Booker makes it plain, from an intellectual and social level, that being proactive and wading into the thicket of an unknown future is essential to the continuance of the traditions that bind us together. "Cynicism about America's current state of affairs," he writes, "is ultimately a form of surrender" (213).

The political story of Senator Cory Booker is one that is inherently American. It is the story of overcoming obstacles unfairly placed upon the stations of birth and race. Indeed, Booker eloquently writes early in the book that we should feel gratitude for the momentous opportunities that we are given by the singular nature of being Americans:

I've said many times of my generation that we drink deeply from wells of freedom and opportunity that we did not dig, that we eat from tables prepared for us by our ancestors, that we sit comfortably in the shade of trees that we did not cultivate. We stand on the shoulders of giants (9).

I've always felt that as a politician, Booker has been one of the few shining stars on the scene. Every action he undertakes is as part of the community, instead of being outside of it. Though a Rhodes Scholar and graduate of the Ivy League, Booker has always been representative of a populace without those grand opportunities, whose struggles are more immediate to the streets than with the towers of knowledge: "I got my BA from Stanford, but I got my PhD from the streets of Newark" (a most-telling passage). Instead of embarking on a corporate career, he moved to the economically distressed city Newark, where he worked with poor residents on legal and housing issues. He later was elected to the Newark City Council in 1998. He then tangled with long-time mayor Sharpe James, a skillful politician in his own right but part of a more old-school machine mentality, and Booker lost his first mayoral contest in 2002. In a display of perspicacity that has continued, Booker recovered and won the mayoralty in 2006 and 2010. Then, after the passing of Frank Lautenberg in 2013, Booker won a special election to fill the vacant seat before winning election the following year to serve a full term in the World's Greatest Deliberative Body. 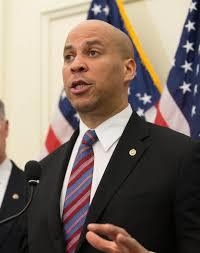 Throughout his political career, as evidenced in the book and on his prodigious use of social media, Booker has demonstrated an ability not only to operate in a bipartisan fashion but also to speak out forcefully on issues near and dear to the heart of progressives. In 1992, while still a student at Stanford, Booker wrote Op-Ed for the Stanford Daily in which he decried his past homophobia (Booker grew up in a religious environment). He described his eventual realization that homophobic attitudes mirrored those of racism, and it made a profound impact on him; this was years before passage of the 1996 Defense of Marriage Act, signed by President Bill Clinton, that basically prevented federal recognition of gay marriage, even before states legalized it. Booker was decades ahead of the Democratic Party, indeed the majority of Americans, in recognized that the dignity of all people is sacrosanct.

This is all part of personal evolution and the importance of moral development. And, to be sure, Booker calls upon his readers to act upon their highest values:

We make a grave mistake when we assume this spirit of connectedness is automatic or inevitable. It is not a birthright. A united country is an enduring struggle. It takes collective work and individual sacrifice. It is not enough to call on others or wait for a leader to emerge who will exalt our national values. I believe this is the question we face, as citizens of this nation: what will we do to affirm this most critical American virtue? (4).

To achieve such an end, Sen. Booker has worked in a pragmatic way across the aisle with Republicans to propose new ideas that may pass in a future Congress. In March 2015, Sen. Booker, Sen. Kirsten Gillibrand (NY), and Republican Sen. Rand Paul (KY) introduced a bill that would allow states to make medical marijuana policies without interference from the Federal government, and also allow doctors at Veterans Affairs hospitals to prescribe it to veterans. Since thirty-five states have some form of legal medical marijuana, this would create a much more stable legal situation. The bill was not acted upon, but a Senate Committee did vote in favor of a measure in May 2015 to allow Veterans Affairs physicians to sign recommendation forms for medical marijuana to veterans.

It's true that, at times, Booker has been criticized for being too cozy with big business and Republicans. As early as his days at Stanford University, Booker befriended many people who went on to become executives in Silicon Valley corporations, nationally known religious leaders, and leaders of the Republican party (indeed, New Jersey governor and failed 2016 presidential candidate Chris Christie is a long-time friend of Senator Booker). When Booker ran for the Senate, he was supported by Republican New York City mayor Michael Bloomberg. When he ran for re-election to the Senate in 2014, Wall Street firms gave Cory Booker nearly $1.88 million, more than any other Senator seeking office. In 2012, while campaigning for President Obama's re-election, Booker earned criticism from Democrats when he termed their attacks on Mitt Romney's wealth as "nauseating." But, as Booker writes: "Everything has a purpose...you can restore, recycle, redeem anything--or anybody" (207).

These partisan squabbles are, I feel, merely a byproduct of natural tendency to pick tribes rather than unite to a common goal. If there is anything that Booker repeatedly returns to in United, it is that the myopia of contemporary politics leads citizens astray, and leaves them vulnerable to ignoring issues of tangible importance. "I believe that this broken system, which afflicts us all, will be repaired" writes Booker near the end of the book. To repeat an earlier point, what sets Senator Booker's work apart from that of similar political books is that it seeks to elevate discourse rather than bring down opponents of the opposite partisan persuasion. This is a refreshing take, one that is truly worthy of study and contemplation. It makes us better citizens. Our nation deserves, and requires, more leaders in the vein of Senator Cory Booker. He is not a leader to merely "watch" but one to partner with and support.