Our recent "Stand Up for Truth" whirlwind speaking tour through London, Oslo (see here and here), Stockholm and Berlin last week as well as webinars, visual presentations and speaking events in U.S. cities was exhausting but quite successful. Truth has always been a difficult and often frustrating business, especially when that old story line tends to repeat of the naked Emperor continuing to ignorantly march forward, even after the little boy has yelled the truth. But someone has to do it! 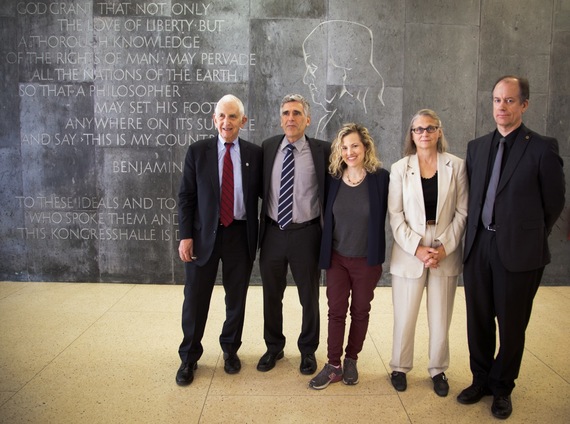 Throughout the week, we discussed the problem of pernicious governmental, corporate and other top-down secrecy involved in globalization that enables large-scale wrongdoing and keeps citizens in the dark about it, making effective solutions and real democracy, and even our collective security, impossible. These issues were relevant especially in Germany, given the context of the details that have emerged about the long-term NSA-BND spy pact targeting European officials, a scandal now being investigated by a German parliamentary committee. Of course such scandals only occur when the truth is effectively kept hidden for decades by powerful institutions. So how can citizens learn the truth a little sooner? We were able to meet with Scandinavian officials working with the Committee on Legal Affairs and Human Rights for the Council of Europe which, significantly, has just completed a Draft Report on Improving the Protection of Whistleblowers.

In Norway, we were able to speak to the fact that a freedom of speech and debate institution had just awarded the 2015 Bjørnson Prize, named after a Norwegian Nobel literature laureate, to Edward Snowden. The academy lauded the American whistleblower "for his work protecting privacy and for shining a critical light on US surveillance of its citizens and others" asking the Norwegian cabinet to protect his visit to Norway in September to receive the prize. Such acceptance of truth-telling would be a real political challenge, given Norway's status as "one of America's closest allies" but one of their most respected law firms holds that Snowden cannot be extradited from Norway to the U.S., since Snowden's action is a political act to uphold the US constitution, not a crime. Similarly in Stockholm, our tour sponsors involved in the Right Livelihood Award "the Alternative Nobel Prize," whose past laureates include "Most Dangerous Man" discloser of the Pentagon Papers Daniel Ellsberg (2006) and Edward Snowden (2014), are pushing for Sweden's government to ensure safe passage for Snowden to travel to Sweden to accept his prize.

(truth action and image by NTLB North Texas Light Brigade in Dallas) The final "Quo vadis Democracy?" event venue on our tour produced some real serendipity as well as irony! We could not help notice the building's striking dedication to Ben Franklin as we walked into the Haus de Kulturen de Welt ("House of the Cultures of the World"), located in the Kongresshalle, a unique gift from the U.S. to Germany, designed in 1957 by a renowned American architect. Known to Berliners as the "pregnant oyster" for its distinctive shape, the Haus sits next to the German Chancellery, on John Foster Dulles Allee in Berlin (whence came the irony given the Dulles brothers' sordid history of world-wide, illegal exploitation). Triumphing over such perfidy (in case you can't quite make out all the words on the wall behind us in the photo above), Franklin's quote so aptly reads:

God grant that not only the love of liberty but a thorough knowledge of the rights of man may pervade all the nations of the earth so that a philosopher may set his foot anywhere on its surface and say, 'this is my country.

To these ideals and to the man who spoke them and lived them this Kongresshalle is dedicated.

These days, most Americans have no idea of the buried history behind Benjamin Franklin's becoming America's first whistleblower, long before the word existed in the English language. You have to dig deeper than most sanitized American history textbooks to learn that Benjamin Franklin was publicly crucified in Great Britain after courageously taking responsibility in 1773, for his "Deep Throat"-like disclosures a year before, disclosures of secret official correspondence related to a colonial governor's corruption and complicity with British repression, the truth of which was to contribute to the American Revolution. Two hundred years before there was a Daniel Ellsberg, Chelsea Manning, or Edward Snowden, an American Founding Father, Benjamin Franklin was treated as a spy and "incendiary agent," suffering incredible backlash described as follows by Franklin biographer H.W. Brands:

For an hour (Solicitor General of the Lord North ministry, Alexander Wedderburn) hurled invective at Franklin, branding him a liar, a thief, the instigator of the insurrection in Massachusetts, an outcast from the company of all honest men, an ingrate whose attack on Hutchinson betrayed nothing less than a desire to seize the governor's office for himself. So slanderous was Wedderburn's diatribe that no London paper would print it.

No wonder Benjamin Franklin came to love liberty and understand the rights of man! He had lived it. The courage and spirit of America's first whistleblower infused the "Quo vadis, Democracy?" discussion we had later that day with German politicians charged with investigating the extent of US-German surveillance cooperation and with other German legal and data privacy researchers. We each tried (see videos below) to effectively address the important questions: What happens to the idea of democracy in an age of mass surveillance, data espionage and collaboration between the BND and NSA? How was the NSA scandal received in the United States and Germany and what can -- and must -- we learn from this?

In my own seven minutes (beginning at the 33 minute mark in the first video below), in the course of trying to explain how lies and propaganda fueled the U.S. government's "going to the dark side" after 9-11, I ended up butchering Mark Twain's quote: "A lie can travel halfway round the world while the truth is putting on its shoes." I hope I didn't confuse the German audience too much. I also hope they stopped on their way out to read the building's dedication and take some needed courage from the example of one of American democracy's founding fathers and its first whistleblower. This type of courage is again required to stand up for truth.