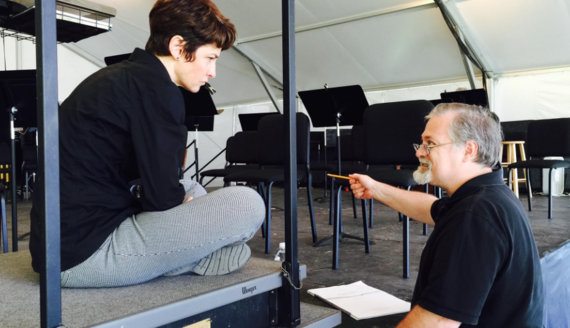 As conductor Laura Jackson conducted the Wintergreen Music Festival Orchestra the other night in the "Three Sky Interludes" from Amelia, my 2010 opera for the Seattle Opera, there were several times when she cued the players with what shall have been for a boxer a lethal uppercut. Wiry, and as precise in her movements as a boxer, she was as accurate as a surgeon; the musicians under her baton responded with enthusiasm to her beat's clear precision. Wielding the baton sometimes like a rapier before the massive sound that I had called for, and sometimes like a matador's cape, she coordinated and shaped the combined efforts of an all-star orchestra comprised of professionals from orchestras all over the country. She did it on 36 hours' notice, at fellow conductor and festival artistic director Erin Freeman's invitation, filling in for a conductor unable to appear.

When the players then went into the ring with the Beethoven Fifth Symphony, I felt as though my heart would break. The terror of those opening bars, the music sounding so like fists crashing on a closed door, visceral in the extreme; my seven year old son, attentive, tucked under my arm, had never heard the piece before. His eyes shon as he whispered to me, "Papa, did you write that?" Beethoven wrote it, I told him. He'd been brought back to life by the men and women we had gotten to know and make music with during the past two weeks at the music festival. "Why?" asked my son. He wants to talk to us, I replied. He wants us to share his feelings, the things that were best about him. Listen, I told him, and, if you're ready to hear what Beethoven has to say, you'll hear him.

I blame the whole "Artist as Hero" trope on the writers like Romaine Rolland who fashioned Beethoven into the Pugilist shaking his fist at Destiny many imagine him today as having been. Poor composer Anton Rubinstein, who had the bad luck to follow Beethoven by only half a generation, and who is said to have physically resembled him. Comparisons were inevitable. Every composer since has been saddled with comparison to the Great Fighter.

At this point in my life as an American composer of concert music and opera, I feel as though I've gone more rounds than I can or want to remember. An entirely new generation of sparring partners surrounds me -- new arts administrators who were in grade school when I had my first bout with the Philadelphia Orchestra; punch-drunk mid-career composer and performer colleagues whose fists are still moving as they take blow after blow from a culture that seems no longer to value what they do; young composers to whom history is irrelevant and the idea of being a gladiator for one's art narcissistic or naïve.

Walk away, I tell myself, when another board knocks down or guts an opera company or orchestra because a new business model (usually something better suited to commercial art or manufacturing, and always about goosing the box office and paying artists less) is needed. And then I hear Beethoven lay it down with any number of his pieces and, shamed, I get back in the ring. Knocked down by the simple facts of life of the contemporary music world, I'll read about a foundation that has decided to pour millions into reviving opera as an art form, and I'm not so much given hope as given a kick in the behind. I get up. I think about the people who buy tickets to concerts, or help support their local performing organizations. Acknowledging the hubris and futility of assuming even the stance, I begin another piece.

I'm too old now, I've got too much invested, have gone too many rounds, to walk away. Of course there is tenderness, and there is solace, and communion, in art; but the ones who make it are assumed too often, it seems to me, to be "playing," to not be serious, to not understand business, to be overgrown children in need of handling. If only we'd gotten real jobs.

It is regrettable that so many smart critics and composers elected at some point to adopt the defensive, (even passive) artistic stance that meandering note spinning is aesthetically superior to writing soulful melodic lines. Maybe the whole extended metaphor occurred to me just now because to my left at the concert sat the dozen young composers who had come to study with me this summer. I observed them as my piece unfolded; I watched them thrill to Beethoven's stirring soul, summoned up for us by the conductor and orchestra. I thought about how I must seem to them (I don't teach; I'm a full-time composer -- a concept completely alien to them) when I talk about the struggle during the 80s between composer practitioners of Modernism, Minimalism, Romanticism, and Post-Modernism. "Do you fight about the future of music?" I asked them, realizing that they, by and large, actually don't.

The fight, in any event, should never have been about style. What were we doing back then, fighting with each other as the audience listened in, bewildered? And it should go without saying that the fight should never have been taken to the audience. The fight was and remains a struggle simply to survive, to make art while raising kids, paying mortgages, caring for elders.

This summer's dozen young composers have not yet entered the ring. They're free. To them, all art is equal. I spent my time with them trying to give them the skills they'll need to stay that way. Keep swinging, I tell them. As it turns out, my pep talk is premature. They haven't yet begun to take a beating. I'm afraid they'll have to learn for themselves that making Art is not about fighting to live an Examined Life; it's about fighting to survive. Making art is not a competition between artists, but our culture loves to celebrate winners, and where there are winners there are the others. Being told you're a loser by your culture is a blow, whether it is true or not. Surviving as an artist shouldn't be an exercise in taking it on the chin, but it is.