The new meta-study from Stanford asks Are Organic Foods Safer or Healthier Than Conventional Alternatives?

No doubt, this study will have many people, even parents, breathing a sigh of relief. Finally, justification to save a few cents by buying conventionally raised food so they can use the savings for... what? What is more important that feeding your family food that has about one-third less risk of having pesticides or fierce bacteria on it? Even if you think these risks are fine for your own family, wouldn't you be willing to waste a little less food so you could afford the type that doesn't give farmers cancer and their children horrific birth defects?

As the author of Wildly Affordable Organic, I was alarmed by the study. When I went to a university library so I could read the whole paper, I was surprised to find how mild it was compared to the Stanford University press release. The meta-study says:

In fact, the peer-reviewed study is full of good news about the health and value of organic food, even while it admits repeatedly that more studies are needed. In other words, there's evidence for choosing organic food even if you only care about safety and nutrition, but the authors don't think it's overwhelming evidence.

But the Stanford press release might lead you to a different conclusion. It says that if you are an organic shopper "new findings from Stanford University cast some doubt on your thinking." These findings mush be right, given that Stanford is a top university and that:

The authors received no external funding for this study.

But what about the inside money? The money used to fund the researchers and the Freeman Spogli Institute for International Studies at Stanford? A simple look at FSI's 2011 annual report shows that it is funded by Cargill and others who have a strong financial interest in Monsanto, McDonalds, Walmart, and other businesses that profit from industrial food practices. Bradford M. Freeman is a top one percenter in the Muckety 400, with strong connections to the Republican Party. How strong? He was George Bush's cat sitter!

Before you head out to the market, check out this slide show to see how the Stanford Institute that funded the study gets its money and to see some of the other reasons to choose organic when you can. Tell us which ones you would take with a grain of salt.

PHOTO GALLERY
Should you take the Stanford organic study with a grain of salt?

As for me, I'm sticking with organic for my own health, for the farmers, and for the planet. The long-term savings are delicious.

Wildly Affordable Organic: Eat Fabulous Food, Get Healthy, and Save the Planet--All on $5 a Day or Less
by Linda Watson

Stanford Organic Study: Should You Take It With a Grain of Salt? (SLIDESHOW)
Should you take the Stanford organic study with a grain of salt? 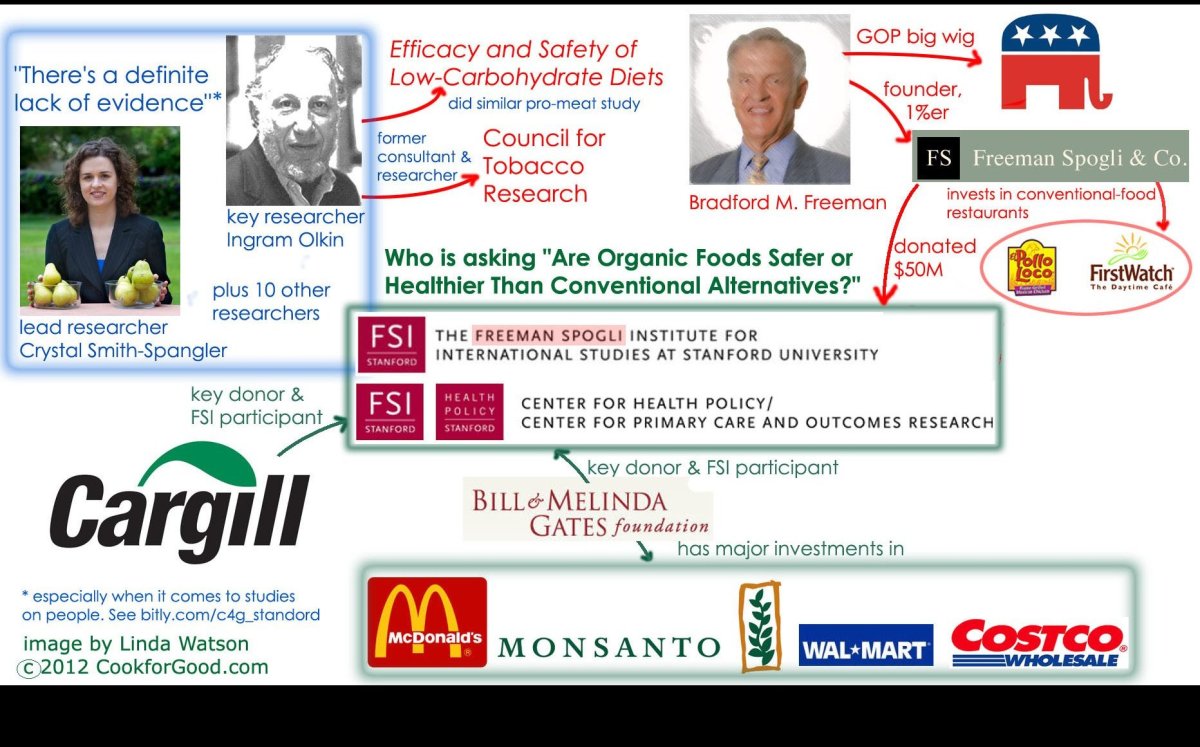 1 / 10
The study seemed unbiased because it used no outside money, but ...
The inside funding for Stanford's Freeman Spogli Institute includes Big Food, Fast Food, and Big, Fast Food investors. This slide shows the big picture, which we'll examine in more closely in the next slides.