At only age 28, Chi Mai, is a dedicated registered nurse, but it's not just his profession. "It's my calling," he emphasized. "I'm a devout Catholic and my ultimate goal being a nurse is to save as many lives as possible and to make as much improvement and changes for as many people as possible, especially immigrant Americans."

In particular, through a special program at Stanford University, Mai focused on helping Vietnamese seniors and family members to create advance directives for health care -- documents enabling people to state how they wish to be treated at the end of life, if they become too ill to speak for themselves, and who should make their medical decisions.

An immigrant from Vietnam, who came to the United States at the age of nine, Mai grew up in a tough neighborhood where he saw many gang activities and people suffering without health care.

Mai originally wanted to be pharmacist and was accepted to Boston University, but he changed his mind. "I found nursing to be more of my temperament," he said. 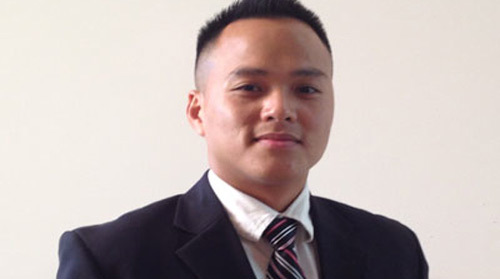 An active member of his church, Mai devotes even his extra-curricular activities to health-related projects. Mai practices what he called "backpack nursing." On his free time, he carries a big backpack full of unexpected goodies. "I go to San Francisco, San Jose and San Leandro and bring homeless people socks and pain-relievers," he said.

Are there homeless Vietnamese? "Yes, quite a few," he answered. "It's sad. Some choose a homeless lifestyle, others lost their livelihood because of their gambling or alcohol addiction." But the saddest part, Mai said, is to see "a whole family falling into homelessness."

In 2012, Mai attended a Palliative Care Education and Training program for improving end-of-life care, held at Stanford University School of Medicine. His participation turned out to have a big effect on the Vietnamese community in San Jose.

According to V.J. Periyakoil, MD, director of the program, Mai's project for training course "addresses the issue of how Vietnamese adults are unaware of the existence of advance health care directives. Those are documents that aid older adults in planning ahead for their towards-the-end-of-life care and guarantees that their standards of care will be met by hospitals and medical facilities."

Mai, who works at Santa Clara Valley Medical Center and is a certified translator at the county hospital, originally intended his advance-directive project to help 10 people, but it ended up going beyond that number.

"I've helped countless numbers of people and patients on filling out their advanced directives so I don't have a specific number," he said. "However, within the Vietnamese population, I'd say it was about 20 families, which seems like a very small number but think about how withdrawn our people are."

According to Peryiakoil, "The boom in U.S. seniors is often described as the 'silver tsunami.' In fact, it is a 'silver-brown tsunami' as the population of ethnic older adults is exploding. It is important for all ethnic communities to work to promote successful aging for their seniors."

Stanford University, Periyakoil said, is offering this free mini-fellowship in palliative care for all members of the community. She observed, though, "While we have many participants from the Chinese and Asian Indian communities, not many Vietnamese have applied for the successful aging training."

"When Chi Mai applied, I was happy to see that finally a member of the Vietnamese American community was interested in helping seniors with aging well," she said.

Mai first had a difficult time making inroads, however. Although he talked to many from all walks of life -- "from church leaders to gangsters to lawyers, nobody had an idea what I was talking about." So Mai made a poster in both English and Vietnamese and talked about the importance of filling out advance directives at his church, as well at various Vietnamese centers.

No one has ever heard of the term "Ke hoach suc khoe cho tuong lai," which is a translation of advance health care directive, Mai recalled. It took a while for people to catch on. He invited two other nurses to his workshops to share their experiences working with seniors and the importance of the health care directive.

Many Vietnamese patients are withdrawn, he said. "They don't know that there are such things that can be asked [when you are hospitalized]. That they can request for more morphine, for instance. They didn't know that they can assign -- verbally -- that 'this person will make decision for me,' in case they are not conscious."

Periyakoil agreed: "Doctors just talk to patients and don't usually consult with their families. But Vietnamese often are family oriented, and they are family-based when comes to making decision."

Although Mai is making inroads, she noted, the needs are there and the education regarding end-of-life care and decisions are tremendous.

For his part, Mai is currently pursuing a doctorate in nursing: "I am doing research to look at hospital policies and how to implement change to help patients, especially within the Asian community."

Andrew Lam, author of "Perfume Dreams: Reflections on the Vietnamese Diaspora" and "Birds of Paradise Lost," wrote this article supported by a New America Media fellowship in collaboration with the Stanford In-reach for Successful Aging through Education Program.