The thing about virtual reality is that it's kind of been around a bit too long. Remember when second life was so darn hot? Well, that was a long time ago.

So, when I was invited to explore the Stanford Human/Virtual Reality Lab, I have to say I was ready to be underwhelmed. The lab is the work of professor Jeremy Bailenson -- and one thing is clear right away, he's spent a ton of Stanford's money on the lab. The Lab's mission is "...to understand the dynamics and implications of interactions among people in immersive virtual reality simulations and other forms of human digital representations in media, communication systems, and games." Which is fancy talk for a simple goal, to explore just where VR might actually make a real difference in our world.

Entering the lab, the first thing you think is, "so, this is it?" There's not much to see except a worn-looking blue-gray carpet, a stack of computer equipment and a weird looking helmet attached to a fat electronic umbilical cord. Moments later, I'm wearing the helmet, a $45,000 helmet I'm told, and from inside, I'm seeing the same bland boring room. Only, it's the computer's digital construction of the room. There's the click of a switch -- and I'm standing on an empty street in a virtual city, with tall buildings around me. I point my arms toward the air and "Woosh..." I'm flying. Dang. I'm flying in the air! The room has speakers all around, so I can hear the air rushing by. The floor has haptic sensors that shudder with a thud when I land. 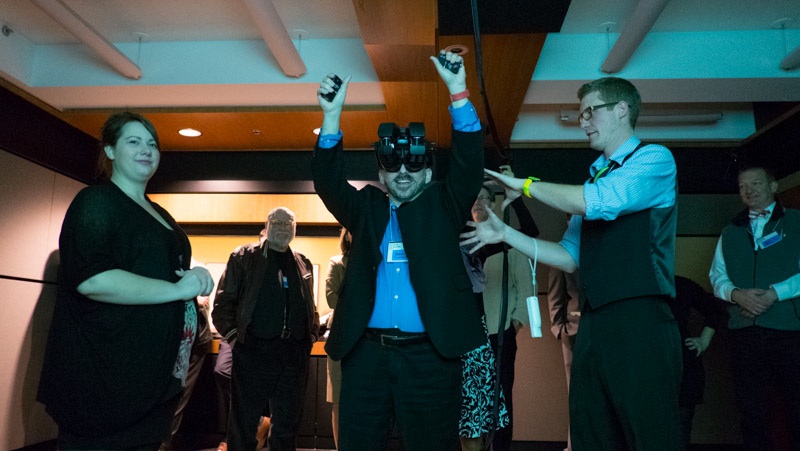 In the course of a half hour, the folks I'm with are flying, swimming in a virtual ocean, and walking across a virtual pit. Exhilarating, terrifying, awe-inspiring. Extraordinary experiences - and each of them in their own way very much real. But the truth is, this is the tip of the iceberg. Games and VR are things you can experience with what is now commercial VR games and platforms. Maybe not at this level, but VR is out in the mainstream. Bailenson's goal is to explore the social, and interpersonal impact of VR - and in that, he's breaking some very new ground. Bailenson's lab studies the social mechanics of virtual existence. In it, identity is endlessly morphing - and the nature of interaction is up for grabs.

Says Bailenson "In the past, VR [virtual reality] has always been this amazing toy that someone has in their garage, and in the last five years what we started to see is that this stuff is no longer science fiction.How is this changing who we are as humans? How is that affecting the human identity?"

He tests how we interact with non-human avatars, finding how powerful, and creepy, eye contact can be.

For example, in the real world, making eye contact makes you more convincing, but you can only look one person in the eye at a time. In his VR lab, a cyber-you can connect with direct eye contact to multiple other people. The result is a more convincing conversation. And these revelations go further, copying another person's head movements after a four-second delay makes them much more likely to agree with you, the lab discovered.

They're testing how all kinds of ways we interact, and who we interact with impacts the way we behave. From talking with a older version of ourselves, to having advertisements that are automatically populated with characters that mimic some of our physical characteristics to sell us soda or clothes.

In one of the demonstrations that is the most remarkable, and shocking, Bailenson shows how he can take a picture of a person, and render a 3D lifelike avatar in just a few minutes. The idea that someone can have a virtual me out in the world quickly, and without my permission, keeps me up nights thinking about a whole new kind of identity theft.

The powerful realization you find yourself facing after an hour in Bailenson's VR lab is that the digital self can have "superpowers" the real you does not. And the behaviors that trigger us to feel fear, or trust, or empathy can now be constructed in virtual worlds. And it's clear they will be.

Bailenson isn't your conventional computer nerd. His background is in cognitive psychology at the University of Michigan and Northwestern University. And he says his work is inspired by novelists like William Gibson and Neal Stephenson, whose cyberpunk fantasies he read while an undergrad.

And watching the experiments taking place in the lab, you can see the coming together of science fiction and technology. There's one project, where your face is actually placed inside an ad that is trying to sell you something, or even more strangely, your facial characteristics are partially morphed on the face of the virtual pitchman (or woman). How will you react when someone who looks and sounds a lot like you is trying to sell you something? If this sounds familiar, it should -- it's right out of the piece of fiction written by Philip K. Dick that was turned into the movie Minority Report.

The VR Lab at Stanford is doing far more than building neat helmets or VR worlds. As they explain it they are "using empirical, behavioral science methodologies to explore people as they interact in these digital worlds."

And one thing is absolutely clear, Virtual Reality at this level isn't going to stay in the labs much longer.

Currently the Lab's $45k headset is the best in the world, but a commercial product called the Oculus Rift has already raised 2.5 million dollars after seeking just $250,000, clearly paving the way for a low cost, high quality VR headset that will bring virtual worlds to the average computer user in the near future.