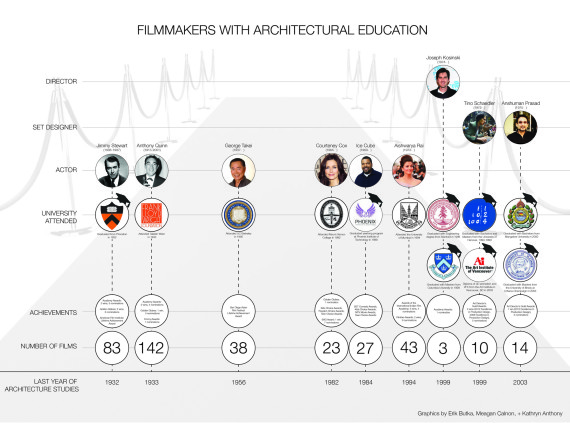 (Click here for an enlarged version of the infographic)

In recent years, high profile news outlets like The New York Times and CNN have featured architects’ struggles by citing the dire unemployment statistic of 13.9% for recent graduates, the highest of any college major. Many architecture firms are still reluctant to hire new full-time members to their team, and all too often students and recent graduates remain without work. Since approximately 40% of architecture graduates pursue work outside of the architectural profession, and the National Council of Architectural Registration Boards (NCARB) currently reports 26,850 students enrolled in accredited architecture programs, we can assume that over the following years 10,000 students trained as architects will forge their own path in a variety of other occupations.

One of the most creative, high profile fields that can offer an architect a wide range of positions is the film industry. And, in fact, those with architectural backgrounds have been making the transition into the filmmaking industry for decades. Our timeline showcases a sample of those with an architectural education who have enjoyed enormous success in the filmmaking industry over the last 80 years as actors, set designers, or directors.

He began his acting career before entering the Army Air Corps in World War II, acting in 29 motion pictures from 1935-39. Stewart went on to star in four Alfred Hitchcock blockbusters, Rope, Rear Window, The Man Who Knew Too Much, and Vertigo and over 80 films over the course of his career. He received highly-sought after recognition for his acting abilities, culminating in an Academy Award for Best Actor in 1941 for The Philadelphia Story.

Our graphic below showcases a sample of some of his most famous films in which he had a starring role.

For architecture graduates considering a career in the film industry, set design may be the most obvious avenue of entrance. One example of an architecture grad who made that leap is Anshuman Prasad, who graduated from the University of Illinois at Urbana-Champaign in 2003 with his Master of Architecture. After writing his thesis Beyond Mise-En-Scene: Narrative Through Architecture in Main Stream Cinema (1980-2002), Prasad moved to Los Angeles to pursue a career as a set designer. He is now a member of the Art Director’s Guild. One of his latest projects as set designer is the film Captain America: Winter Soldier. From 2005-2013, he has been involved in many blockbuster films, including Die Hard 4, The Hangover, No Strings Attached, and Girl With the Dragon Tattoo, as shown in our timeline below.

Prasad views his film career as more of a specialization rather than abandonment of architecture, as his time as set designer has given him a new appreciation for the mood and character of spaces. In particular, light, shade, reflections and rain create incredible variations within a space. The benefit of being a set designer is that all these conditions can be controlled. He also believes that the most critical aspect of set design is proportion, and here his architecture degree is especially useful. Looking back on his career transition, Prasad reminisced, “I believe it was the diversity of the work that has always attracted me to set design and there was a lot of passion as well, after all, this was Hollywood. For someone who still believes in the magic, it was a dream job.”

Before becoming a virtual set designer, Tino Schaedler began his architecture career at The University of Hanover in Germany, graduating with his Masters in 1999. He practiced for three years, working for Daniel Libeskind and Barkow Leibinger, while teaching Studio Digital Analog at the University of Arts in Berlin.

When interviewed by designboom.com, he admitted that he felt stifled as an architect. While fascinated with accessible mediums and techniques, he endured long hours, lots of pressure, and little money. He quickly realized the potential of broadening his architectural design and representation skills with advancing digital tools and decided to attend film school at the Art Institute of Vancouver, British Columbia, where he graduated with a diploma in 3D animation and visual effects in 2003.

Schaedler realized that his degree in architecture provided him with a broad range of “understanding and sensitivity for other fields.” It was a hard decision to quit architecture but it led to more creative freedom, since he was now able to create opportunities to bridge various fields and mediums together. His approach to architecture has shifted as a virtual set designer as he no longer feels limited to traditional building practices.

From 2003 to 2011, he was involved with blockbuster films such as Charlie and the Chocolate Factory, V for Vendetta, Harry Potter and the Half-Blood Prince, and Fantastic Voyage. He now views space as a relationship driven by a narrative rather than being conceptually rigid. Schaedler continues to enjoy being fully in charge of his own designs and to grow in his passion as a virtual set designer, art director, and trained architect. Our graphic highlights all 10 of Schaedler’s Hollywood motion pictures to date.

His decision not to be an architect paid off. Kosinski made his directorial debut in 2010 with the blockbuster sequel, Tron Legacy. He landed this job due to his digital modeling skills, which he learned while studying architecture. Originally, Disney sought to use a formula for the movie similar to The Matrix, but Kosinski was able to convince the producer, Sean Bailey, to hire him based on his ability to conceptualize a new reality in his world of Tron.

This year, Kosinski extended his filmmaking resume by serving as director, writer, and producer for Oblivion, starring Tom Cruise. Due to Oblivion’s instant popularity as the number one film at the box office on its opening weekend, Kosinski’s background in architecture is gaining extra attention. Buzzfeed has profiled how his architecture degree is able to help him design structures like the ‘Sky Tower’ in Oblivion. When interviewed for that piece, Kosinski was quick to point out that he does not miss being an architect. In fact, he argued, he has done just as much if not more than most of his colleagues with whom he went to school. As a filmmaker, he is able to be more of a dreamer, one that, using the same digital tools as an architect, can create what cannot be physically built at this time. Our graphic shows all three of his Hollywood motion pictures to date.

For Prasad, Schaedler, and Kosinski, this transition between creative fields lent itself to more gratifying design work, much higher pay, and ultimately a more satisfying life. Their stories remind us that those with an architectural education are fortunate – they have the creative grounding, technical knowledge, and flexibility to be successful in a variety of other industries. Working in a standard architectural firm may not be for everyone, especially if it entails working long, thankless hours, getting stuck drawing bathroom details, or even getting laid off at the drop of a hat. These stories show how an architectural degree can allow architecture grads to forge their own path, and create a dream job of their own design.

Kathryn H. Anthony, Ph.D. is ACSA Distinguished Professor at the School of Architecture, University of Illinois at Urbana-Champaign, and the author of two scholarly books, Design Juries on Trial: The Renaissance of the Design Studio (20th Anniversary Edition available on Amazon.com) and Designing for Diversity: Gender, Race and Ethnicity in the Architectural Profession (University of Illinois Press); over 100 scholarly articles, and two apps for iOS: The Design Student Survival Guide, and The Student Survival Guide. For the past two years, she has taught a new graduate seminar on “Architecture, Cinema, Environment and Behavior.” The class was inspired by her experience supervising Anshuman Prasad’s architectural masters’ thesis.

"Star" Architects: The Story of 4 Architects who Made It in Hollywood originally appeared on ArchDaily, the most visited architecture website on 19 Jun 2013.