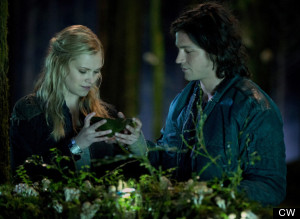 In accordance with the network's recent history and usual modus operandi, both dramas lean heavily on genre influences and artfully tousled hair. The sci-fi-ish tropes and ideas the shows explore are not new, of course, but that's not necessarily a problem: Both shows rest on reliably sturdy concepts that allow the dramas to tell stories about alienation, identity and the difficulty of sustaining a community. However, one does so more successfully than the other.

"Star-Crossed," the more pallid offering, tells a culture-clash tale about a few alien teens attending a high school with a generally unfriendly student body, and "The 100" is a survival story about teens who have to build a new life on a post-nuclear Earth. Things get dicey on both shows, but it's only on "The 100" that the stakes and the drama's underlying themes gain any kind of traction.

The aliens on "Star-Crossed" don't have bumpy foreheads or weird features; they are generally very attractive humans with a few artful tattoos on their faces (just as the "beast" on the CW's version of "Beauty and the Beast" is a hot dude with a single, non-disfiguring scar). Excellent bone structure and a soundtrack studded with yearning pop songs only get you so far, however, and there's a tentative blandness to "Star-Crossed" that hindered my ability to care about any of its broadly sketched characters.

It has a few ham-handed characters and some wonky moments as well, but "The 100," which evolves into a surprisingly watchable companion to "Arrow," does a better job of exploiting its premise and occasionally poking at the dark ideas at its core. It still has some evolving to do, but it's braver than I thought it would be, and that was a welcome surprise.

It's a bit of an unfair comparison, I have to admit: The CW sent only two episodes of "Star-Crossed," but I've seen four episodes of "The 100." The latter show left me wanting to see more, but the only thing that'll prompt me to try to catch a bit more of "Star-Crossed" is lingering loyalty to Aimee Teegarden, who's best known for playing Julie Taylor on "Friday Night Lights." Teegarden (who sports brown hair here) tries hard with her underwritten role, but at times, she seems understandably uncomfortable with the dialogue, which has more than its share of clunky lines. Matt Lanter is fine as the show's male lead, but the relationships sketched out at the high school are predictable at best.

A bigger problem for "Star-Crossed" is that its world-building is patchy and frustratingly undercooked. The main action of the show takes place about 10 years after the aliens first arrive, but it's hard to get a sense of what occurred during that decade and why. The humans and the newly arrived Atrians clearly don't get along -- the aliens are mostly segregated into a guarded enclosure -- but even that situation prompted questions. Do the Atrians and humans ever interact outside that armed zone? Are the high school kids the only ones allowed out? What's the Atrian culture like, aside from the facial markings and language? What do they believe and what do they want for their people?

These aren't trifling questions: If we don't have a sense of what the Atrians lost and what they want, it's hard to care about them or the clash-of-cultures narrative. Both sides' grudges are mentioned here and there in dialogue, and a few characters talk about nurturing hope for the future of human-Atrian relations, but it's hard to see why any optimism exists. The Atrians' lives are extremely circumscribed and confined, and the humans seem mostly fine with that. That set-up isn't necessarily a bad premise for a story, but "Star-Crossed's" race metaphors are obvious and not particularly compelling, and the show doesn't appear to be very interested in telling pointed stories about oppression, marginalization and subjugation.

"The 100," on the other hand, surprised me more than once and seems far more comfortable with grey areas than "Star-Crossed," which seems a little too comfortable staying in the "Which Boy Will She Choose?" arena. I expected "The 100" to sand off any potential rough edges, to tell modest adventure stories and to create situations in which it made sense for teenagers to kiss, and it does all of that. But it also seems aware that it needs to have more than that if it's going to survive in a brutally competitive entertainment environment.

It was refreshing to see that the romance elements weren't given precedence; if anything, that aspect of the show feels somewhat perfunctory in the early going. That makes sense, given that all the characters have much bigger (and possibly radioactive) fish to fry.

On "The 100," every character's survival is at stake, and the show wisely doesn't back away from that fact. The kids sent down to Earth as guinea pigs 100 years after a nuclear cataclysm are given little guidance and no supplies (and yeesh, even for a CW show made on a shoestring, the spacecraft they ride down to the surface looks incredibly cheap). The kids quickly split into factions and begin to behave like teenagers, which is to say, they do everything they're not supposed to do. The enterprising Clarke (Eliza Taylor) and a few others are organized and practically minded, but even so, the planet is inhospitable, to say the least.

Back on the Ark, the space station that sent the kids to the planet, Henry Ian Cusick (Desmond from "Lost"), Isaiah Washington and Paige Turco spar over who's in charge and what should happen next. I kept thinking that the Ark and Earth stories would diverge and that the show would have to come up with a series of awkward contrivances to keep them linked, but the two threads actually dovetail pretty well and inform each other in reasonably interesting ways. Turco is especially credible and engaging as Abby, Clarke's mom and the Ark's resourceful doctor, but Cusick seems rather muted and subdued. (That might have something to do with the wavering American accent he attempts -- and it's a little odd that a show about a motley bunch of human survivors wouldn't let him keep his non-American accent).

The biggest problem affecting both "The 100" and "Star-Crossed" seems to be that a number of characters stay fairly close to predictable stereotypes. Both shows feature bullies that grate every time they appear, and Clarke needs more depth and texture if she's to become TV's answer to Katniss Everdeen. As the show's lead, Taylor doesn't have quite the presence of her co-star, Bob Morley, who plays one of the show's bad boys (a character who, I'm glad to say, gained some much-needed nuance over time). It's early, however, and I'll keep my fingers crossed that "The 100" will try to supply a little of the entertaining and meticulous character building we saw on "Sleepy Hollow."

To keep me watching in the long term -- and for now, I plan to stick with it -- "The 100" will need to keep complicating its characters and their moral universe. But the good news is this modest show already has a number of things in its favor: Its pace is bracing, the choices are difficult and the danger the characters face is real. (Everyone in the Ark fears airlocks for good reason.) It may not be all that deep, but "The 100" doesn't avoid the questions at its core: When the survival of humanity is at stake, is every life is sacred or do those who contribute less seem expendable? Does a fresh start in a new world allow people to shake off past oppression -- or is it the beginning of a different kind of tyranny?

The dystopia of "The 100" may not be especially original; it's a mash-up of "Lost," "Lord of the Flies" and a couple dozen young-adult novels. But these questions keep coming up because children (and grown-ups) keep wondering about the unforgiving nature of the universe and whether it's possible for cultures and individuals to evolve beyond their most brutal instincts.

If "The 100's" answers to those question falter, well, there are only 13 episodes in the first season. Let's hope that gives the show fewer reasons to dodge the consequences of its less conventional choices.

Ryan McGee and I talked about "Star-Crossed," "The 100," "Sherlock," "Brooklyn Nine-Nine," "The Walking Dead" and "New Girl" in the most recent Talking TV podcast, which you can find here, on iTunes and below.