You've heard the big Kate Middleton story this week right? No, no. Not that one. The one that the Duchess of Cambridge is super duper pregnant.

In its September 17th issue, Star magazine first crowed, "It's Official -- Kate's Pregnant!" And just a week later, they "confirm" that "It's Twins!" A family friend supposedly tells the mag that Kate had an early pregnancy test done and her hormone levels indicated that two royal babies were on the way. The huge photo of the duchess in her Prabal Gurung dress from the state dinner in Singapore last week even seems to show Catherine with a hint of a bump.

Well, take that with however huge a grain of salt you wish. But there might be something even more dubious... is that baby bump a figment of someone's overzealous photo retouching?

HuffPost columnist Naughty But Nice Rob first spotted the potential retouching. We took a closer look, and yep -- something fishy is definitely going on her.

First of all, Star flipped the wire photo horizontally, which is standard publishing practice, and they've also lightened the duchess' hair and face. But in our opinion, the retouching seems to go further. The lines of Catherine's dress appeared fuzzy on Star's cover, a sure sign that they've been manipulated (i.e., pressed outward to suggest a bump, perhaps?). They also seem to have removed a ring from her right hand and re-adjusted the water glass so it could be closer to her face. The placement of the "William's Warning!" graphic, which covers her backside, also makes her slim figure look wider than it is.

Her Royal Highness has obviously never posed for a magazine cover, but that hasn't stopped mags from plucking out a file photo and slapping it on their fronts. Grazia famously stuck Catherine on their cover after the royal wedding, facing outcry after they first photoshopped Kate's waist into a toothpick.

Check out the cover vis-a-vis the actual photo below and tell us... is Star being suspicious? 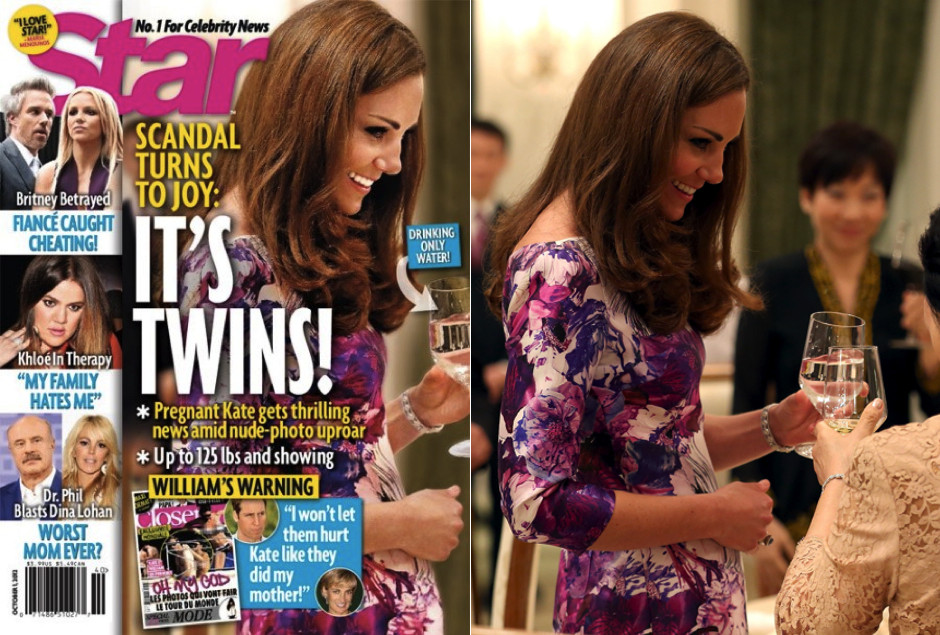 See more of Catherine's mag covers (none of which she sat for)...