A life-size spaceship prop from TV's original "Star Trek" series, once lost and in shambles, has been lovingly restored to its former glory by die-hard fans for a new mission: to live long and prosper as a museum piece.

After nine months of restoration, the Galileo shuttlecraft — a life-size spaceship prop from the iconic 1960s science fiction TV series — was publicly unveiled last week in a ceremony amid loud cheers from a crowd of "Star Trek" fans and friends on hand to see the ship before its sendoff to its final frontier Space Center Houston, the visitor's center for NASA's Johnson Space Center, on Wednesday (June 26). 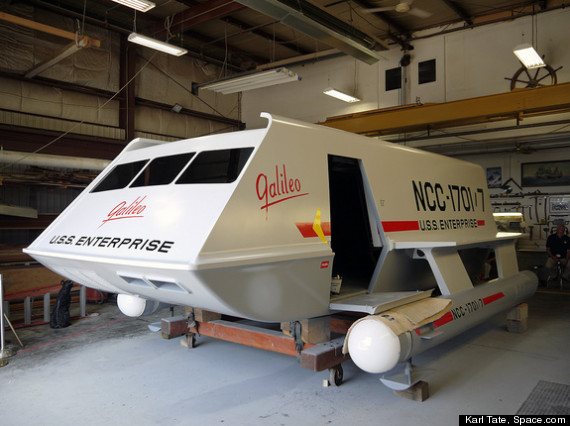 The Galileo shuttlecraft from TV's "Star Trek" is shown fully restored after a yearlong project led by Trek superfan Adam Schneider of New Jersey. The restored Galileo was unveiled on June 22, 2013 at Master Shipwrights Inc., in Atlantic Highlands, N.J.

"This is amazing," "Star Trek" superfan Adam Schneider told a crowd of more than 350 friends and fellow fans as he unveiled the restored Galileo on June 22 in Atlantic Highlands, N.J. Schneider bought the huge Trek spaceship prop at auction with the specific goal of restoring it and donating it to a museum for the public to enjoy. "Despite spending [nearly] 50 years basically outdoors, for a prop built to last a year or two, she's ready for her next journey." [See Photos of Star Trek's Galileo Shuttlecraft Fully Restored]

Schneider unveiled the fully restored Galileo shuttlecraft, at Master Shipwrights Inc., a boat restoration company that performed the work on the Trek prop. Schneider's wife Leslie broke a bottle of champagne to commemorate Galileo's resurrection, but only off to the side so as not to damage the ship.

"This means a lot to everybody, all the fans," said Mike Stein of Nutley, N.J., who commands the U.S.S. Justice fan club and was one of the many "Star Trek" fans attending Galileo's unveiling. "This is going to be an inspiration of what our vision for the future was for the people who will see it." 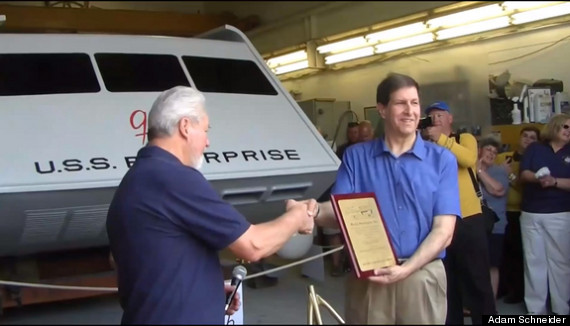 "Star Trek" superfan Adam Schneider (right) receives a plaque from Hans Mikatis of Master Shipwrights, Inc., during the unveiling of the restored Galileo shuttlecraft on June 22, 2013. The Galileo was originally featured on the original "Star Trek" TV series in 1967 and restored by Schneider and his team.

One fan, amateur astronomer and retired psychiatrist Willie Yee of New Paltz, N.Y., drove to see Galileo in a white Toyota Prius modified to look like a "Star Trek" shuttlecraft, complete with a Federation flag symbol, Trek logo and striping and a bunch of Tribbles (fictional fuzzy critters from the show) in the trunk.

Without the Galileo, Yee told SPACE.com, he would not have been inspired to create his own Prius shuttlecraft, which he's dubbed the Zhang Heng.

Galileo's new home is the museum Space Center Houston, which is located next door to NASA's Johnson Space Centerin Houston, Texas, the home base for the U.S. astronaut corps and Mission Control. There, the "Star Trek" shuttlecraft will be presented with other Space Age relics to help convey the history of the U.S. space program. Galileo will be formally unveiled at Space Center Houston on July 31. 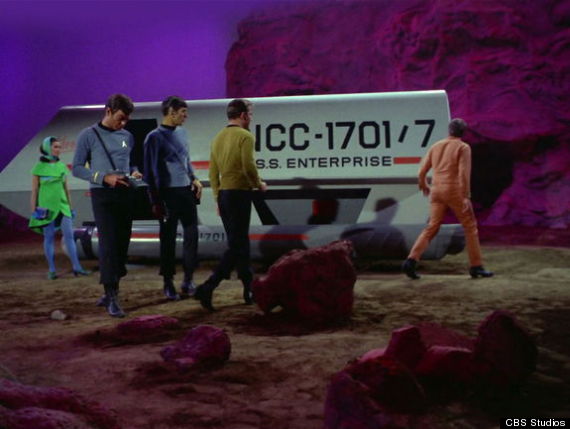 "This will be a centerpiece in their display showing the linkage between science fiction and real space travel," Schneider said, adding that Galileo predated NASA's own space shuttle fleet by more than a decade. "This will be the iconic piece in the best possible home at the gateway of the manned space program. [Galileo Shuttlecraft to Land at Space Center Houston (Video)]

The Galileo shuttlecraft made its "Star Trek" debut in 1967 in the episode "Galileo Seven," in which the ship ferries crewmembers (including commander Spock) from show's starship, the U.S.S. Enterprise, down to the surface of a hostile planet. The Galileo is damaged, leaving the crew to find a way to survive until they can be rescued.

Built by car customizer Gene Winfield, the Galileo shuttlecraft is about 23 feet (7 meters) long and has 5.5-foot (1.7 m) ceiling height. It was primarily made of painted wood and sheet metal over a steel frame. The huge prop appeared in seven Trek episodes before the series was canceled in 1969 after a three-season run.

"This is easily the largest 'Star Trek' prop in the wild, and this is a spaceship," Schneider said. "It's not a chair, it's not a ray gun … it's a spaceship."

After the original "Star Trek" TV series cancellation, Galileo's voyage truly began. The shuttlecraft was initially donated to a school for the blind, and then resold to a series of collectors and would-be restorers until June 2012, when Schneider bought the Trek prop in an online auction. He has not disclosed the cost of Galileo or its restoration. 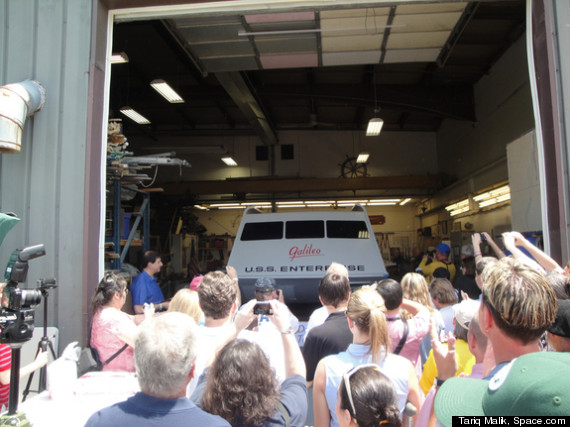 But Schneider's goal of restoring Galileo for donation seemed a daunting challenge. By the time obtained Galileo, the shuttlecraft was in bad shape. Time and the elements had left Galileo little more than a shade if its former self. And the shuttlecraft did not come with an instruction manual either, Schneider said.

"My plan right away was to buy it, figure out what to do to restore it, and then to donate it," Schneider said. "I was told by an awful lot of people that it was too far gone, that too many years had passed, that it would be too hard."

Working with his partner "Star Trek" blogger Alec Peters, Schneider and the team at Master Shipwrights — led by craftsman Hans Mikatis — tracked down vital details about Galileo to restore it as accurately as possible. By tapping into the expertise of that fan base, Schneider and Peters were able to identify key details for Galileo such as the markings on the side not facing the camera during its television appearances.

One Trek fan even built a key component for Galileo's restoration, a small compartment filled with electronic-like gear mounted to the aft of the shuttlecraft.

"There are no plans of the ship, as built, that we've ever found," Schneider said. "But there are a lot of pictures of it, and a lot of fans."

Now, with Galileo one its way to Houston (it was shipped overland by truck) the end of its long voyage is in sight.

"I hate to admit it, but I think Adam and I are going to miss you," Leslie Schneider told the shuttlecraft during its unveiling. "Live long and prosper, Galileo, and warp speed to Houston."