The first "Star Trek Into Darkness" poster has come into light.

Paramount released the one-sheet for J.J. Abrams' blockbuster sequel, though Trek fans looking for Captain Kirk and Mr. Spock will be sorely disappointed: The poster shows Benedict Cumberbatch's villain standing on a pile of ruins while overlooking the blown-out skyline of London. If that image seems instantly familiar, that's because you remember similar-looking posters for "The Dark Knight" and "The Dark Knight Rises."

Here's the plot of "Star Trek Into Darkness," directly from Paramount.

In Summer 2013, pioneering director J.J. Abrams will deliver an explosive action thriller that takes "Star Trek Into Darkness." When the crew of the Enterprise is called back home, they find an unstoppable force of terror from within their own organization has detonated the fleet and everything it stands for, leaving our world in a state of crisis. With a personal score to settle, Captain Kirk leads a manhunt to a war-zone world to capture a one man weapon of mass destruction. As our heroes are propelled into an epic chess game of life and death, love will be challenged, friendships will be torn apart, and sacrifices must be made for the only family Kirk has left: his crew.

Starring Cumberbatch, Chris Pine, Zachary Quinto, Simon Pegg, Anton Yelchin, Karl Urban, Zoe Saldana and John Cho, "Star Trek Into Darkness" is out in theaters on May 17, 2013. Check out the poster, and some of its possible inspirations, below. 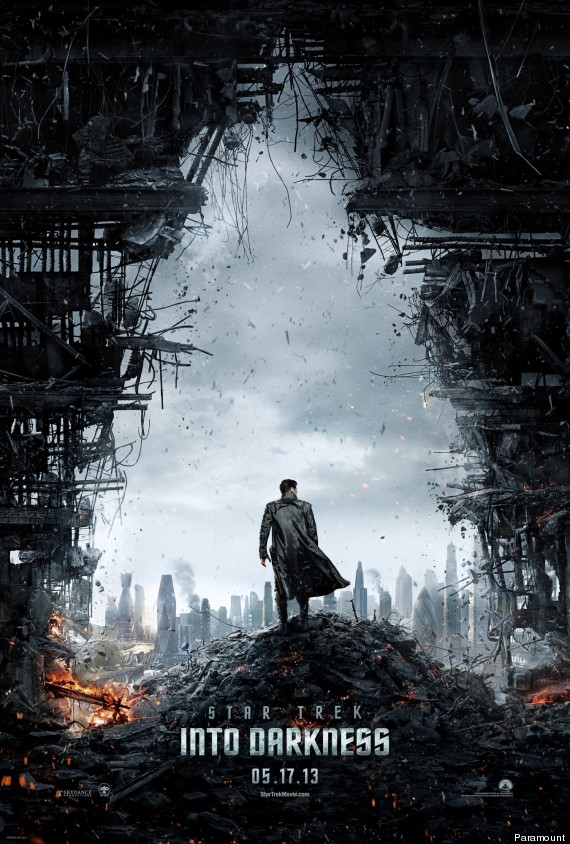 'Star Trek Into Darkness' Poster: Benedict Cumberbatch Gets Familiar Poster (PHOTO)
J.J. Abrams Movies
1 / 8
Super 8
In the summer of 1979, a group of friends in a small Ohio town witness a catastrophic train crash while making a super 8 movie and soon suspect that it was not an accident. Shortly after, unusual disappearances and inexplicable events begin to take place in town, and the local Deputy tries to uncover the truth - something more terrifying than any of them could have imagined.
YouTube