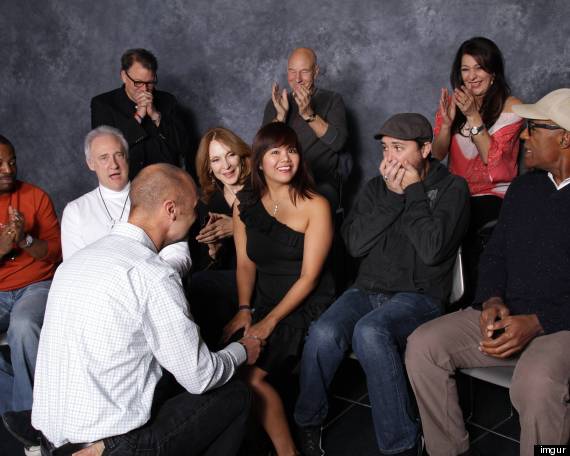 An unexpected marriage proposal in front of the cast of "Star Trek: The Next Generation" made for a memory that is truly out of this world.

A "Trek" fan popped the question during a cast photo op Sunday at Austin Wizard World Con, according to actor Wil Wheaton, who played Wesley Crusher on the popular '90s sci-fi show -- and was seated to the immediate left of the bride-to-be during the proposal (she said "yes").

The photo rose to the top of Reddit's front page on Nov. 7. Wheaton, an avid user of the social news site, wrote in the comments:

About 30 minutes or so into this particular session, these two people came in. The girl went to stand between Patrick [Stewart] and [Jonathan] Frakes, and the guy directed her to stand in the front, instead. All of us tried to figure out what was going on... and the guy said, 'I really love 'Star Trek,' but I love (her name) even more.' He got down on one knee, and proposed to her.

Cast member Marina Sirtis had apparently met the couple earlier in the day and given them a hard time for not yet being married. According to Wheaton, Sirtis was a little embarrassed by the proposal.

"I guess when the cast of 'Star Trek' tells you to engage, you make it so," observed one Reddit user, co-opting catch phrases from the show.

An awkward shot of the "Star Trek" proposal from a slightly different angle also circulated on the Internet, but Wheaton remarked that the unflattering photo did not do the moment justice.

"Once we knew what was happening, it was awesome. I'm incredibly happy for these people, and I love that I got to be part of what is hopefully a moment they'll celebrate and remember for the rest of their lives," Wheaton wrote.

Click through the slideshow below for more geeky proposals.