A long time ago, in a galaxy far, far away, five editors at The Huffington Post got together to rank characters in the "Star Wars" universe, from Jar-Jar Binks to best. The subjective list weighed a number of factors -- cultural imprint, importance to the story, coolness and whether or not the characters were toys we wanted to own as children.

With this list, you'll disagree. In the comments, let us know. And may the Force be with you. Always.

67. Characters from chess board on Millennium Falcon

38. Admiral Motti (whose lack of faith was disturbing)

33. All the Ewoks except Wicket

25. All the Tusken Raiders

A leading figure in the Rebel Alliance, Mon Mothma briefs the rebel forces before the Battle of Endor. Remember: Many Bothans died to bring us these rankings. -- Chris Greenberg

A rancor is classified as a large, carnivorous reptomammal, and reptomammal is one of the coolest words to ever exist. Permitting you have an appropriately sized pit, there is no excuse for you to not have a rancor as a pet. -- Ryan Kristobak

Even before John Boyega popped up in a Stormtrooper uniform, Stormtroopers were pretty cool. -- Christopher Rosen 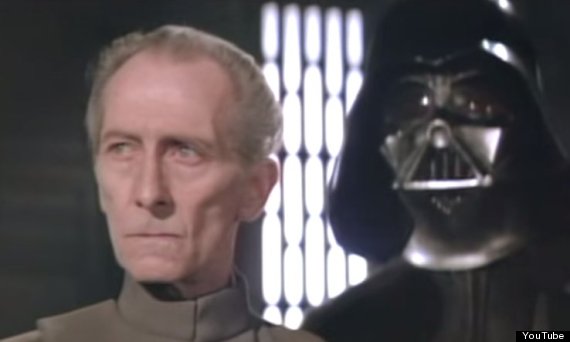 It takes a special kind of Moff to hold Darth Vader's leash. It takes Grand Moff Tarkin. Entrusted with the keys to the first Death Star by Emperor Palpatine, this high-ranking Imperial official was the man who destroyed Alderaan and nearly wiped out the Rebel Alliance at the Battle of Yavin. Unfortunately for the Empire and himself, Luke Skywalker's X-wing slipped through his fingers as he tightened his grip on the uprising. -- CG

Luke is the ostensible everyman of the "Star Wars" universe, the unwitting hero thrust into the middle of a galactic battle that raged long before he was even born. So why is he so annoying? In "A New Hope" and "The Empire Strikes Back," Luke is such a teen he might as well stomp up the stairs and slam the door to his bedroom. In "Return of the Jedi" his demeanor becomes equal parts smug and cocky, like a college freshman returning to his parents' house for winter break. It's all too much. (Meanwhile, Han and Leia are carrying the heavy water for the Rebel Alliance.) Fans might find this controversial, but search your feelings, you know it to be true. -- CR

Jabba's only notable appearance in the franchise comes in "Return of the Jedi" (sorry, Special Edition Jabba in "A New Hope"), but his Tatooine lair is such a world unto its own that the crime lord has remained one of the franchise's defining figures. The many creatures who inhabit his cave have become just as much a part of his image as their own, from Bib Fortuna and the green slave woman to a band that rivals the Mos Eisley cantina group. Jabba may be a massive blob, but his spittle has earned its spot in the "Star Wars" canon. -- Matthew Jacobs

With the ability to deceive and maintain control over most of the galaxy, Emperor Palpatine was arguably the most powerful character in the "Star Wars" universe. But like many villains, his downfall was the result of his overconfidence and pride. He incorrectly believed that he had enslaved Darth Vader to the point of no return. And while the Emperor was the worst of the worst, he's also kind of fun? Sometimes you just want to obscure your face in your hoodie and let out an twisted, raspy, "Greetings, young Skywalker!" -- Andy McDonald

If you believe Admiral Ackbar's significance lies solely in his leading the attack on the second Death Star, stop that line of thinking -- IT'S A ... pitfall. Part of what makes Ackbar so meaningful to "Star Wars" is that he is one of the highest-ranking military figures in the Rebel Alliance (Supreme Commander) and a non-human. Ackbar's existence represents precisely the progressive values held by the rebellion in its battle against a Galactic Empire known for being xenophobic toward non-humans. Okay, but yes, also, fine: IT'S A TRAP! -- AM

In terms of pure comedic relief, there is no better member of the “Star Wars” ensemble than C-3PO. Fluent in "over 6 million forms of communication," Threepio is one-half of the best dysfunctional multilingual duo in movie history (alongside R2-D2, of course). The gold droid with the heart of a puppy dog and the temperament of an anxious worrywart is vital in getting the Rebels off of Hoth and Han out of Jabba the Hutt's palace. He may be an Anakin Skywalker creation, but he's more fun than any other "Star Wars" character. Just don't call him a mindless philosopher, you overweight glob of grease! -- MJ

There have been few greater collective nerdgasms than the moment when Darth Maul unleashed the second blade of his double-sided lightsaber. (Look at that thing.) Horn-headed, fire-red for eyes and flips for days, Maul is a demon’s whisper that slinks in and out of Qui-Gon and Obi-Wan's peripherals before their epic final confrontation. Basically a manifestation of pure evil, the Sith Lord’s brief but insidious film stint was so haunting, his image has reached further than just the "Star Wars" universe. -- RK

Hello, what have we here? Lando Calrissian, of course. The true rapscallion of the "Star Wars" universe, Lando was a classic anti-hero in "The Empire Strikes Back." Full redemption came later in "Return of the Jedi," but the real reason he's listed here is because of the way he says "Han" and "Chewbacca." -- CR

When the Jedi High Council hands down a decision, the Jedi Order listens without question. Everyone, that is, except for Qui-Gon Jinn. An O.G. Jedi badass, Qui-Gon asked the difficult questions while simultaneously showing love for even the smallest and seemingly most insignificant beings (seriously, he even liked Jar-Jar). Outside his many words of wisdom, we have Jinn to thank for discovering the Chosen One. -- RK

Is there a more lovable, oversized fuzzball than Chewbacca? If only we all had a sidekick as loyal as Han Solo's Wookiee, who's committed to protecting him after Han is dismissed from the Imperial Navy for refusing to kill Chewie. (We just went expanded universe on you guys.) He's more than just friendly devotion and animalistic wails, though. Chewbacca convinces Han to turn back when he wants to abandon the Rebels in “A New Hope,” and how would the Millennium Falcon’s hyperdrive functions cooperate without his handiwork? He saved Yoda in “Revenge of the Sith,” and he basically gets the final word (so to speak) in “A New Hope.” He may seem like a “walking carpet,” but The Force would fall apart without our old pal Chewie. -- MJ

What to be said, need be? Yoda is one of the most recognizable characters in all of pop culture. He's one of the wisest and most powerful of all the Jedi. A speech pattern named after him he has. In "Empire Strikes Back," he's introduced as a goofy little green muppet -- but with the soul of a philosopher. By "Return Of The Jedi," as you sadly watch Yoda fade away into "forever sleep," you completely forget that he's made of cloth and latex. That's when you walk out of the room and tell your friends there's "something in your eye." -- AM

The case can be made that with a few bloops and bleeps, R2-D2 is the most charming member of the "Star Wars" universe. The extremely well put-together droid is sassy in a way that makes him endearing -- he doesn't put up with C-3PO's antics, for instance, and displays no fear in the face of the evil Empire. He's also loyal: look at how hard he works to find Obi-Wan in "Episode IV" as evidence. Speaking of which: Without R2-D2's bravery, would the events of "A New Hope" even occur? If Princess Leia had give the Death Star plans to C-3PO, we'd all be wearing drab grey uniforms and worshiping at the feet of Darth Vader. Hero status: legit. -- CR

It's one thing to have a lot of great lines or amazing appearances in a film, but it's quite another to have almost zero dialogue, just a handful of scenes, and still be seen as one of the most terrific characters in the entire series. But that's Boba Fett. When even Darth Vader shows a modicum of respect for you, that's saying something. And though the prequels killed his tough-guy image a bit -- and the original trilogy ... well, just killed him altogether (pre-expanded universe) -- Boba Fett is a character whose likeness is forever canonized. And not by George Lucas or some poorly conceived prequels, but by the fans. Like his Mandalorian armor, Fett's legend is not easily compromised. -- AM

From the first moment we see him as a Padawan to his days in recluse as Ben Kenobi, Obi-Wan's resolve, patience and excellent lightsaber skills make him one of the most important Jedis to ever exist. Look at this resume: He was the first Jedi to defeat a Sith Lord in approximately 1,000 years, routing on Darth Maul when all hope seemed lost. He conquers Anakin in combat, and despite all of the egregious actions his former Padawan has undertaken (younglings, guys, Anakin killed younglings), Obi-Wan chooses not to end his pupil's life (because Obi-Wan's love runs too deep for his friend). And in the end, Obi-Wan sacrifices his life so that Luke can become the Jedi he was destined to be. True, compassionate and genuinely good, Obi-Wan is what makes a man a man. -- RK

Rebel. Politician. Soldier. Diplomat. Sex Symbol. Princess. Leia Organa is the woman that women want to be and that sibling Jedi and smugglers want to be with. From the moment her ship, Tantive IV, enters the screen carrying those stolen plans in "A New Hope," this fearless and feisty heroine goes where most Galactic males feared to tread. Though she may look the part of the damsel, Leia doesn't do distress, even when she's in grave danger. She withstands Darth Vader's torture on the first Death Star and gets fatal revenge on Jabba The Hutt for objectifying her with that iconic metal bikini. A one-woman committee for change in the galaxy, Leia also lands Han Solo and turns out to be Force-sensitive. -- CG

The first time Darth Vader ever appeared onscreen, he was cloaked in a haze of white exhaust from a Stormtrooper shootout. As his black cape comes into view, everyone flees -- and one of cinema's most iconic villains is born. There may be no movie character more synonymous with a few bars of music than Darth Vader is with the Imperial March. Over the course of the original "Star Wars" trilogy (we’re not talking about Anakin Skywalker here), Darth Vader's guttural voice and masked visage gave us many of the franchise's most memorable quotes ("I find your lack of faith disturbing") and introduced the most terrifying way to die in screen history. Vader ranks behind only Hannibal Lecter and Norman Bates on AFI's list of the greatest movie villains of all time, but surely neither of the other two has sold more than his body weight in toys and memorabilia. Impressive. Most impressive. -- MJ

Mamas, don't let your babies grow up to be smugglers. Don't let 'em fire blasters and drive that old Millennium Falcon. Make 'em be Jedi and Imperial Governors and such. Unless, of course, you want them to be like Han Solo. A scoundrel with a heart of gold, Solo is the dashing, world(s)-weary cynic who shoots first and fixes the hyperdrive later. He may have joined up with Rebellion for the paycheck and not the ideals, but that didn't stop him from helping to destroy a few Death Stars along the way. Don't worry, he knows you love him. -- CG