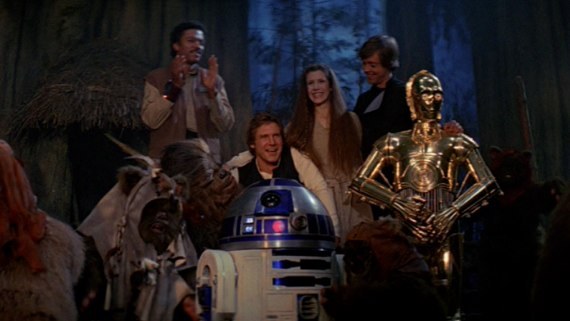 So, there's going to be a Star Wars: Episode VII (and VIII and IX) after all. For years, George Lucas had sworn that 2005's Revenge of the Sith would be the last film produced for the saga. If there's one thing that us Star Wars fans know, however, it's that, when it comes to Star Wars, George Lucas' word should be taken with a ... hold on, I'm looking for something smaller than a "grain of salt" ... powder residue of flour. Back in the '70s, the original plan was to make either nine or 12 Star Wars films, depending on what day Lucas was asked. The fact that he's changed his mind by selling Lucasfilm to Disney is not particularly surprising, but the real question is: Where does the story go from here?

First, keep in mind: The last time a Star Wars film was not written and directed by George Lucas was Return of the Jedi. Before that, The Empire Strikes Back. People still love those two movies -- especially Empire -- so the prospect of a new writer and director is, at the very least, interesting. But, if you were writing a sequel to Return of the Jedi, where would you go with the story? Not getting too wonky, but there are really only three options.

Oh, we should discuss those options? Sorry, I just assumed that you knew them already because I sometimes assume everyone likes Star Wars as much as I do. OK, let's do that.

1.) Cast the actors from the original trilogy.

This is the least likely of the three options, so let's get this out of the way. Look, I'm not saying that Anthony Daniels won't be back as C-3PO because, in reality, that will probably happen. But the chances that we will see Mark Hamill, Harrison Ford and Carrie Fisher in their original roles are even more remote than even Dantooine. Harrison Ford didn't even want to be in Return of the Jedi and has mentioned repeatedly that he's done with the character of Han Solo (as opposed to Indiana Jones, which he still seems to love). Plus, in 2015, Harrison Ford will be 73. Mark Hamill will be 64. This is not how we want to remember Luke Skywalker. Continuing with the original cast would also mean that Episode VII must take place 32 years after Return of the Jedi. The biggest time-jump in the franchise to date is the 19 years between Revenge of the Sith and the original Star Wars. (Or, A New Hope, if you must.)

2.) Recast the characters from the original trilogy.

This might seem like blasphemy, but what's the difference between two separate actors portraying Obi-Wan Kenobi and a second actor playing Luke Skywalker? This is definitely an option, but may not be a wise option. Ewan McGregor was accepted as Obi-Wan because the prequels had to have a younger actor. Luke, Han and Leia, though, are much more beloved than Obi-Wan. If Han Solo is recast, nerds everywhere will bellow, "Why didn't you just cast Harrison Ford?" (Because Harrison Ford doesn't want to be in your new Star Wars movie, nerd. But you're probably not listening, are you?) If I were asked to decide on the future of Episode VII -- no one is ever going to ask me to decide this, obviously -- this is the option that I would pick. Unfortunately, I have a feeling that the most likely option is also the most depressing one:

3.) A whole new group of characters.

Yeah, on the surface, this doesn't sound too appealing. Sure, C-3PO and R2-D2 will most likely always be around, but if Disney executives want to make a series of unlimited films -- and they probably didn't spend $4 billion to purchase Lucasfilm to produce the sequel to Radioland Murders -- they will have to introduce new characters. The problem with this is that unless the next film is set after all of the OT characters have died off (which is certainly plausible), there will have to be some overlap. Obi-Wan and Darth Vader bridged the prequels to the Original Trilogy -- now, another character will have to do the same thing. (Or, at the very least, get mentioned in some way. "Have you seen Han Solo?" "Yes, he's at the cantina, let's just handle this on our own, guys!" It's problematic.) Now, the most likely character to bridge the gap is, of course, Luke Skywalker. If it's just to hand-off the series to another set of characters, however, that's disappointing. I mean, we've been so inundated with the adventures of Anakin Skywalker over the last 13 years (and, newsflash: Anakin is a prick) that Star Wars fans are starved for anything that has to do with the characters from the Original Trilogy. For whatever reason, those characters have been a bit forgotten. If a direct sequel to Return of the Jedi is made in 2015, and the main character is named Blitz Colon (or something) and it's set 200 years after Jedi, well, that's a shame. But, from Disney's standpoint, if they truly want to re-launch a franchise, it's probably their most likely option.

(Also, not surprisingly, I will be writing more about Episode VII all of the time.)