Even if you couldn't make it to the "Star Wars" Celebration in Anaheim, California this week, you're still in luck. StarWars.com is live-streaming 30 hours of the event, which included Thursday morning's "Star Wars: The Force Awakens" panel with director J.J. Abrams, producer Kathleen Kennedy and Entertainment Weekly's Anthony Breznican.

The most exciting part of the panel was of course the debut of the latest teaser for "The Force Awakens." But during the panel we got to see a handful of behind-the-scenes photos, meet the new robot BB8 and also learned that the desert shown in the first “Force Awakens” teaser is not Tatooine, but a new planet called Jakku. Kennedy also promised there will be “really strong women” in all future "Star Wars" movies.

Abrams and Kennedy were joined by three members of the cast, including Daisy Ridley, Oscar Isaac and John Boyega who revealed new info about their characters. We leaned that Boyega's Finn is a character in incredible danger. The actor was hesitant to confirm whether or not Finn is a storm trooper, but he slightly nodded his head when asked. Ridley described Rey as a "self-sufficient scavenger" in Jakku, while Isaac said his Poe Dameron is "the best friggen pilot in the galaxy." In "The Force Awakens," Dameron is sent on a mission by a princess who comes across Boyega's Finn. 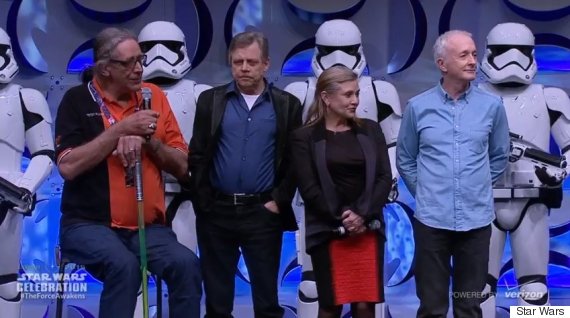 Watch the live-stream below.

The first teaser trailer for J.J. Abrams "Star Wars: Episode VII" debuted in November revealing new robots, characters, a crossguard lightsaber and the return of the Millennium Falcon. We also learned a few character names in December when Abrams and Lucasfilm released a series of collectible "Star Wars" trading cards.