Star Wars: The Force Awakens is the greatest motion picture in the history of cinéma -- that's fairly obvious -- but it's also humanity's only hope for salvation, as a people, as a species, as life forms adrift in a savage and utterly inconvenient field of reality.

Indeed, the Force may have been taking a little nap (apparently the energy field that binds the universe together hit 'Snooze' for 32 1/2 years), but now it's back, and it's a hit, it's a classic, it's the answer to all our prayers -- even the prayers of people who don't pray. It's that good. It's so good, it makes me want to dust off the very finest critic terms, such as "bravura" and "painterly" and "tour de force." I've gotten so excited typing these first few lines that I had to take a shower and go for a little walk. But I'm back -- and as noted so is Star Wars: bigger, better, faster, stronger, oh, heck: The Force Awakens is no mere "movie" -- it's the single greatest work of art produced since the discovery of fire (if perhaps it's tied with Talking Heads' Remain in Light, but who's keeping score?)

Don't worry about spoilers here, because whether or not Han Solo (Harrison Ford) is killed by his son Kylo Ren (Adam Driver), I'm not telling! Instead, let it be enough to state that this shimmering and scintillating tale encompasses all it means to be human -- and, uh, also sometimes not human (as old white guys who played weird creatures with silly names long, long ago briefly punch the clock). For instance, in encompassing everything there is to know and experience about existence, in this Star Wars movie there are people running, and also there are people shouting, sometimes simultaneously! Vehicles fly around and shoot at each other and stuff. Some of the people in it are mean, whereas others are nice, and still some others are kind of in between -- just like in real life! It's. That. Good. 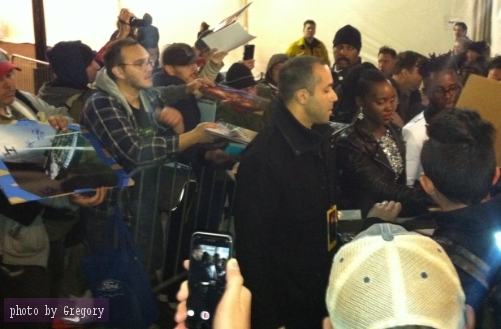 At the Hollywood première, lovely Lupita Nyong'o kindly signs
autographs for eBay hounds (and a fan or two)

That said, one of the most important aspects of Star Wars: The Force Awakens is its revolutionary feminism. Read it here, aloud, in front of your coworkers: there are people in this Star Wars movie who are not men, but also who are not Princess Leia! In fact, even Princess Leia isn't Princess Leia anymore, as here she's General Leia, and of course she's Carrie Fisher, and I mean, come on: novelist! Love her. (And since the Baby Boomer generation is nothing without its relentless nepotism, Fisher's millennial daughter Billie Lourd also gets to participate -- and acquits herself admirably, this writer hastens to add.)

Speaking of feminism, just as Luke Skywalker (don't hold your breath) was a boy-man, there's a new girl-woman character here who's kind of Katniss Everdeen and Imperator Furiosa and Lara Croft except not exactly, cryptically called Rey (Daisy Ridley), and frankly she kicks a lot of ass (or, in Ridley's native parlance, arse). If the galaxy itself were an ass -- and we're probably lucky it isn't -- it would have Rey's desert-scavenger boot print displayed prominently on its galactic glutes. Frankly, as brunette British sci-fi women go, Daisy Ridley cannot repair the tragedy of Jenna Louise Coleman quitting Doctor Who, but there's (new) hope that perhaps she can help fill that considerable void. There's also some other TV show's Gwendoline Christie playing sort of a typical blonde, as well as wondrous Oscar-winner Lupita Nyong'o completely obscured as this kind of CG ancient gypsy pirate female-Yoda action-figure person. Combined, these female characters literally eradicate sexism. That's right! Go open the door, step outside, and sniff the air: all sexism around the entire planet is gone! With just one movie out of the gate, Disney's Star Wars has totally obliterated sexism. Plus disease, famine, pollution, war, racist cops, gluten, airline delays, and pro football have also been wiped away by The Force Awakens. It's. That. Good. 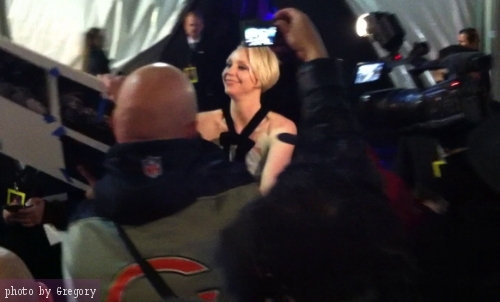 And yes, there are also some guys in this Star Wars movie. Simon Pegg is kind of in it, just as he's kind of in every movie. (Is Simon Pegg the new Gene Hackman?) That "Ming the Merciless" guy from that old sci-fi serial where Star Wars pilfered its opening crawl (and plenty of other stuff) is in it for a few seconds, too. That bloke from Attack the Block is also in it, and he's pretty good! The makers have carefully delivered a proper Benetton-ad spread of a cast -- albeit puzzlingly without a whole lot of Asians -- but there is a solid Honduran guy. No Christopher Lee, though, sadly (I actually love Attack of the Clones; and I'm single -- connection?)

In closing, this handy paragraph is dedicated to exclamatory phrases. Star Wars: The Force Awakens is mind-blowingly brilliant! It's astounding! Jaw-droppingly thrilling! The greatest of them all! I laughed, I cried, I screamed and broke five chairs, I got arrested! If you see one movie this year that probably won't win Best Picture (but you never know), make it this one! Flashy! Neato! Fabulous! Dazzling! Triumphant! Grand, sweeping, deeply satisfying storytelling for the new millennium! The best thing that's ever happened to me in my entire life except for that thing I can't print here! Wild! Grandiose! Sick! ("Sick"??) Um, um...oh: MAGNIFICENT! (That's always a good one. Publicists: Go with that one.) And that should just about do it. For you see, I haven't actually viewed Star Wars: The Force Awakens yet -- I'm just hoping like everybody else that I can land a quote on the home video packaging, or at least in a newspaper ad (if there are still newspapers). Thank you, Star Wars. You have definitely changed my life. Now excuse me, for I need a good laugh, thus I'm off to go see Sisters -- which still has a few tickets available.