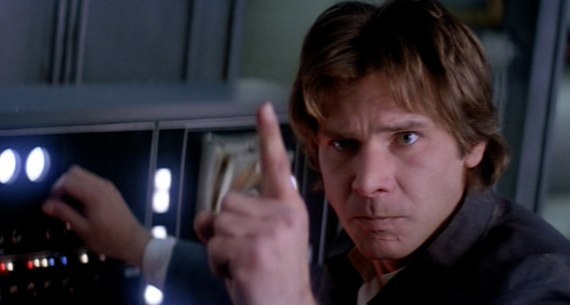 OH MY GOD, THE NEW STAR WARS MOVIE IS GONG TO BE TERRIBLE!

There has been a lot of doom and gloom surrounding the development of Episode VII as of late. There have been rumblings for awhile that J.J. Abrams hasn't been the happiest of souls thus far, as production crawls along. Last week's departure of screenwriter Michael Arndt (who wrote the first Episode VII treatment and script) only added fuel to this already explosive story.

(I tried my best last week to explain that the overhaul of a first draft is not always a bad thing, as what happened with The Empire Strikes Back.)

Now, today, The Hollywood Reporter has published a well-reported piece that at least gives us a glimpse at some of the behind the scenes drama. And, yes, there's plenty of drama to be found here, with the main takeaway that Lucasfilm head Kathleen Kennedy asked the studio for an extension that would push the release of Episode VII to 2016, but Disney head Robert Iger gave her a firm "no."

So, yes, this has led to a million voices crying out in terror, "WHY ARE THEY MESSING UP STAR WARS?"

Here's the thing: Stop freaking out about Star Wars.

Beyond the script problems addressed last week, the production of The Empire Strikes Back was a nightmare. Twentieth Century Fox financed the first Star Wars, but Lucas decided to finance Empire on his own, and he almost wound up bankrupting his company because of it. Empire was way over budget and it was way over schedule.

Lucas also wasn't thrilled with the job director Irvin Kershner was doing (which just seems silly now). But, yes, the animosity between Lucas and Kershner is a bit reminiscent of the bitterness that we're seeing now between the director of Episode VII and its producers. (One main point of contention is that Lucas demanded Kershner send in a master shot of each scene, basically so that Lucas -- who was in California while Empire shot in different parts of Europe -- could have some control over the editing. Kershner refused to do this.)

Now, as for the demand that Episode VII hit a 2015 release date, this happened with Empire as well. As mentioned, Lucas had financed Empire on his own and he was running out of money. (Actually, as we learned in J.W. Rinzler's excellent The Making of The Empire Strikes Back, Lucas had run out of money and was financing Empire with bank loans.) So, Empire HAD to hit that May 1980 release date or Lucasfilm was in jeopardy of going bankrupt. If anything, that situation was more dire than the one we're seeing now.

Do you know what movies had very little behind the scenes drama? At least that we know about? The Star Wars Prequels.

If you want to talk about having time to get things perfect, Lucas had 16 years between Return of the Jedi and The Phantom Menace to get things just right. What we got was The Phantom Menace. In the behind the scenes footage, there's Lucas going on and on about how funny Jar Jar Binks is while his employees laugh and laugh. (I do not blame these employees one bit. Out of fear for my job, I would have been right there cheering, "Jar Jar Binks is just dynamite, Mr. Lucas. You did it again, sir.")

At this point, maybe a Star Wars movie needs chaos to succeed. The two movies in the saga with the most chaos were Star Wars and Empire and those two right there are the best of the six by far. Perhaps, for whatever reason, chaos is the recipe for a great Star Wars movie. And the fact that not everyone is getting along at least makes me think these people care. (I'm not saying that people didn't care about the Prequels, but there did seem to be more of a, let's say, lackadaisical feel to the whole thing.) Emotions tend to flare up when there's an investment and I do believe that everyone involved is invested -- maybe too much. And maybe that's the problem. And maybe all these problems will come together and make a great movie -- because it's worked that way before. Personally, all of this chaos brings me comfort.

Look, in a perfect world, would more time to work on a script be a good thing? Yeah, probably. But more time is certainly no guarantee (again, see The Phantom Menace) and, right now, that's not the reality. Episode VII IS coming out in 2015 whether we like it or not and just because it's under a strict deadline and the production is rife with tension, that doesn't mean that we're not going to get a great movie. If you need proof of this, go watch The Empire Strikes Back again.