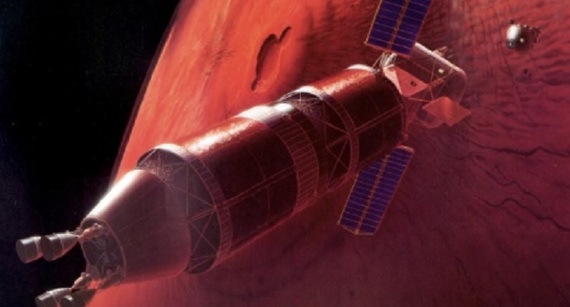 Like many others I'm looking forward to seeing the new Star Wars movie and hoping that it will recapture some of the magic of the first trilogy. However, it's important to acknowledge that while Star Wars gives us a hugely entertaining story, it is extremely low grade science fiction. And that's because it never tries to do what good science fiction does: focus on the impact of science and technology on people.

Like pretty well all fiction, science fiction is in the business of exploring the way that human beings respond to challenges. The only real difference is that science fiction is the only genre where the protagonists may not be human at all. Admittedly it's rare that a writer has the imagination to come up with a character that is genuinely more than a human in an alien costume, but it has been done. But what makes a story science fiction is that the challenges are produced by or related to science and technology.

Such a scenario doesn't have to be extreme or space-oriented. It could be based on biology or the the science of the mind. Some of the best science fiction is set solidly on Earth in the present day or the near future. That's not to say there's anything wrong with extrapolating, or making use of science fiction tropes that stretch scientific knowledge. Neither time travel nor faster than light space travel, commonplace in science fiction, are possible today or likely to be so in the near future. But in both cases there are loopholes in the science that make it possible (if highly unlikely) that they could be brought into being in the future.

Of course, the technology used in science fiction, and even some of the detail of the science will not all be correct. Of the two parts of the name, 'fiction' is the more important. Good science fiction sticks as closely as possible to what may be possible, but can't afford to sacrifice story for accuracy. This leads to another problem for those who don't really understand science fiction. They expect it to predict the future. But that's not what it's about. As Niels Bohr (amongst others) said "Prediction is very difficult, especially about the future." You only have to look at 2001, A Space Odyssey, one of the best science fiction movies ever, to realize that fourteen years ago we did not have Pan Am shuttles taking commercial passengers to space stations, Bell video phones, moonbases and manned ships with sentient computers heading for Jupiter.

So prediction is out, as is perfect accuracy of science. But there should at least be an attempt to make the science plausible. The warp drives of the USS Enterprise were not based on real science—but they took a scientific approach. Once you begin to totally forget the laws of nature, as often happens, for instance, in a superhero movie, then you have moved into the related but different genre of fantasy. Magic can ignore the conservation of energy, for instance, but science can't.

So the point of good science fiction is to see how humans react to the challenges of science and technology. The genre asks "What if?" and has fun with the consequences. Take a very early example—H. G. Wells' short book, The Invisible Man. Ordinary fiction using the technological props science fiction, would simply use invisibility to play pranks or rob a bank. But Wells asks what the ability would do to an individual. He explores how it would twist his mind.

Similarly, we know that travelling at extremely high speed through space slows down time. So a space traveller will also travel into the future. Mediocre science fiction either ignores this, or simply uses it a way to imagine what the future might be like. But in good science fiction like The Forever War by Joe Haldeman, the writer explored the psychological impact of time travel on a group of soldiers, sent to war only to return and find everyone they knew and loved long dead. Was there anything left but to re-enlist and go through it all again?

Those happen to be dark examples, but there's no reason why good science fiction can't be light and frothy either. The point is that science has a role in setting up the challenges the protagonists face. It's not just a matter of living out a soap opera, or a war story, in science fiction trappings.

Perhaps the best example of how to get it wrong—and then right—is Battlestar Galactica. The original version was little more than a TV attempt to cash in on Star Wars, so much so that the makers were sued for plagiarism. There was no real attempt to engage with the science and technology. Yes, there were robots and fleets of spaceships, but they could as easily have been Native Americans and wagon trains. But in the twenty-first century reboot of the series, although the trappings were still there, the story line was much more an inner narrative, including the impact of the technology on what it meant to be human. What had been terrible science fiction became an impressive example of the genre.

And so we return to Star Wars. Like its imitator, Star Wars didn't really care about the science. In reality it was more a fairy story sheep in a science fiction wolf's clothing. The trappings of space fiction were simply bolted onto a far older form. Star Wars is a fairy tale with Jedi as wizards, the magic of the Force and even a princess. What's the most innovative piece of technology here? A twinkly magic sword. Which, with the help of magic, helps Jedi do the impossible and somehow parry blaster shots traveling far faster than any possible reaction time. How do the science and technology impact the protagonists' lives? By getting them from A to B and giving them weapons.

In essence, Star Wars is science fiction from the 1920s and 30s pulp magazines. This was great fun. But it was a new genre, finding its feet, and existed primarily by redressing old story forms in scientific garb. By the 1950s, though, written science fiction had matured. The movie version has sometimes followed, but often has stayed anchored in the past. So I don't look to Star Wars: The Force Awakens for great science fiction. But I do hope for an enjoyable adventure.

Brian Clegg (www.brianclegg.net) is the author of Ten Billion Tomorrows: How Science Fiction Technology Became Reality and Shapes the Future.