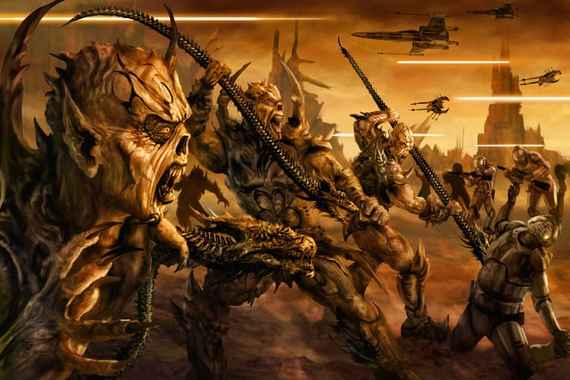 If we define "aliens" as non-humans, then from Wookies to Ewoks to Yoda, there are literally hundreds of aliens featured in all of Star Wars. If we define "aliens" as simply being intelligent life not found on the planet Earth, then literally everyone - including the "humans" Obi-Wan, Han Solo, Rey, and Leia - are all aliens, too. The diversity of species in Star Wars is never really spoken about directly, it's just a fact of life, and accordingly, no one uses the word "alien," in any of the films. And yet, in nearly twenty Star Wars novels published between 1999 and 2003, a giant alien invasion trope threatened the galaxy, and the legitimacy of Star Wars right along with it. 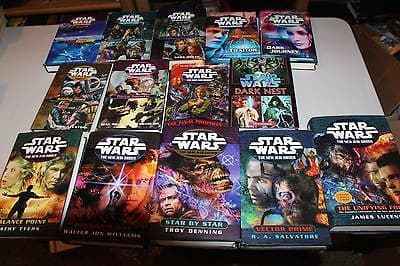 When the Star Wars canon was reorganized a few years ago, article after article decried the loss of the "Expanded Universe". The basic complaint was tat Mara Jade and Grand Admiral Thrawn and all the cool stuff from Star Wars books were taken away from the fans and turned into "Legends," which was code for non-canonical stories; glorified, monetized fan fiction in the Disney age. But, to my knowledge, most fans of the EU weren't (and aren't) really losing any sleep about getting rid of the massive storyline which runs through the majority of the EU's New Jedi Order series. I'm talking about the Yuuzhan Vong invasion of the Star Wars galaxy; a moment in Star Wars fandom only slightly less dark than introduction of Jar Jar Binks.

First thing's first: if you're really into Star Wars books, you certainly read these things for character stuff and not necessarily the plots. The characters and their legacy are the enduring cool things about these books, including The New Jedi Order. Plus, to be perfectly crystal clear, a ton of these books were written by fantastic science fiction and fantasy writers including R.A. Salvatore, Michael Stackpole, Karen Traviss, Walter Jon Williams, Grey Keyes, Troy Denning, Michael Jan Freidman, Elaine Cunningham, James Luceno, Kathy Tyres and many more quality writers. I'm not sure any of these writers can be blamed for the fumble of the Yuuzhan Vong storyline at all. 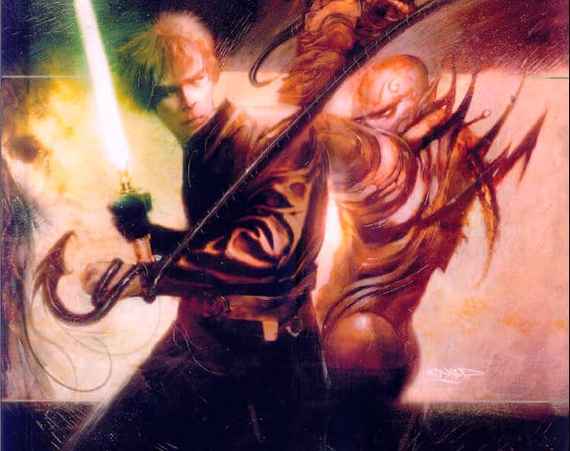 The project the project was conceived as a crossover between Bantam Spectra and Dark Horse Comics prior to 1999. But, 1999 was the year that Star Wars books switched from being published by Bantam Spectra to Del Rey, which is where they effectively have lived every since. And so, who had responsibility for the idea is unclear, but regardless of origin and ownership, it was a bad one. And certainly didn't warrant so many books fleshing out this giant war.

Who were the Yuuzhan Vong? Only the worst and most cliché alien invaders of all time! They hate technology, and as such, are like free-range organic aliens intent on purging the galaxy of anything they deem impure. Unlike the complex politics of the Empire, or the Republic, or even the Jedi, the destructive evil of the Yuuzhan Vong is black and white: they must be stopped at all costs because they are killing machines. Did I mention they kill Chewie in the very first book in which they appear? Yeah. They drop a whole moon on him and he dies. Don't you love this storyline? It's your favorite Star Wars thing ever. 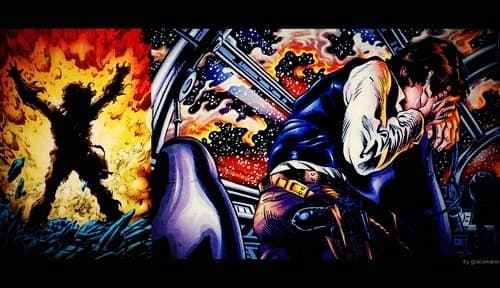 The Yuuzhan Vong also have nifty staffs that can block lightsabers, and they're notoriously hard to kill with the existing conventional weaponry found in Star Wars. Translation: SNOOZE PATROL! Nothing about the Yuuzhan Vong was ever remotely scary, because they were seemingly so unstoppable. Also, because they operated with a generic hive-mind strategy, they come across like a shoddy cross between zombies, the aliens from Starship Troopers and, you guessed it, the aliens from Independence Day. Star Wars is many cheesy things, but an alien invasion cliché never seems to be something to stick into this universe. Why not just do a time travel story while you're at it? How about vampires? I mean, why not?

These days, with the Give Us Legends campaign, and other fan efforts to legitimize the various Star Wars comics and novels published prior to 2014, there seems to be a tendency to look at all these stories through rose-colored glasses. Even the beloved Timothy Zahn "Thrawn Trilogy" (Heir to the Empire, Dark Force Rising and The Last Command) aren't as solid as you might remember them. 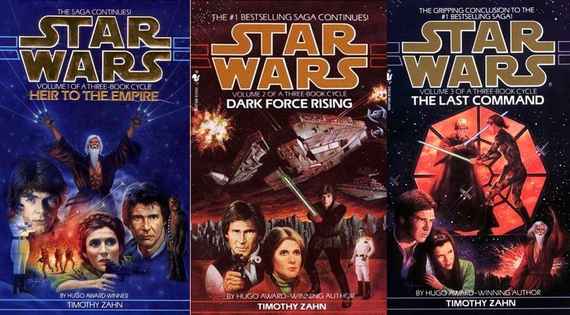 Influential to be sure. Creative and well written: certainly. But even the Zahn books fall prey to the use of the word "alien" to describe the Noghri, the savage race of creatures who mostly serve as bodyguards to Grand Admiral Thrawn. Indeed, the idea that Emperor Palpatine was a giant xenophobe, someone who hated "aliens", comes primarily from the Star Wars books, not from the films. Sure, it makes sense to cast the Emperor as an all-around evil bad guy, but does he need to be space Hitler, too? Some might be nodding their heads yes, while others might remember that the Emperor was surrounded by a lot of non-humans in the prequels, so maybe he wasn't such an outer-space racist after all? Sure, he hated the Jedi, but that seemed more like an ideological thing than a diversity thing. 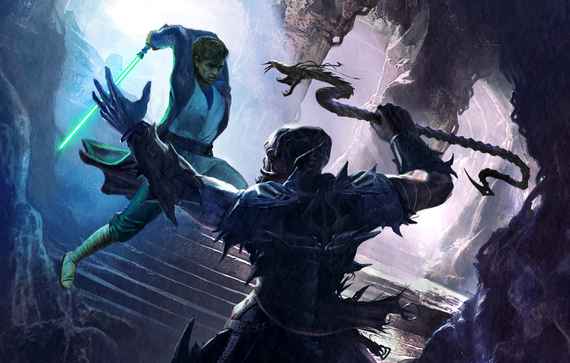 Luke battles an Overlord. You can tell this guy is evil because he has a snake.

I'm not defending the Emperor any more than I'm saying that all the books in The New Jedi Order were bad. They weren't! Plus, literally everything that happens with Jacen Solo in these books laid the groundwork for what we ended up getting with Kylo Ren. Still, I cant help but feel that the one great thing about Star Wars - it's avoidance of the played out alien invasion cliché - was slapped onto this rich fictional universe, and nearly strangled the Star Wars-ness out of Star Wars with its gross claws. If losing the Expanded Universe means forgetting the Yuuzhan Vong invasion ever happened then I say: good riddance to bad generic alien invasion rubbish.