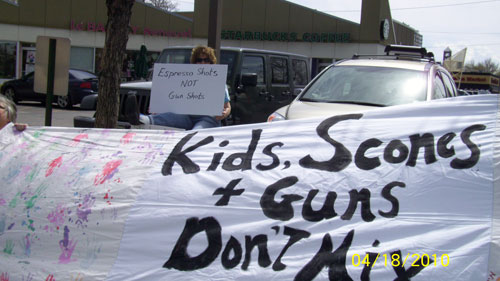 A physician friend relates the story of a man who appeared at the doors of his hospital ER with a gun shot wound. The hapless man had left his loaded gun on the seat of his truck, where it discharged when he sat on it. "Guns don't kill people," argues the NRA. Human error kills for sure. Remove the proliferation of firearms and many fewer would be injured or die.

The U.S. gun lobby's myth of "more guns, greater safety" is belied by the sheer numbers of accidental shootings. Last October a concealed carry permit-holder in Jacksonville, Florida ignored signs prohibiting firearms and accidentally shot and killed a woman in a Cyber Café. Witnesses reported the woman was shot in the back when the permit holder's concealed handgun fell from his belt. A similar accident in an Indianapolis Planet Hollywood Restaurant in 1997 sent two women to the hospital when a man bent to pick up something from the floor and his gun fell out of his pocket and discharged.

Numerous studies reveal that guns in the home equate to an increased risk of firearm homicide, suicide, and accidental shootings. The Ask Campaign of PAX and the Million Mom March advises parents: Ask if there is a gun in the other child's home before sending your child for a play date. It's a sickening indictment of the U.S. gun culture that so many children, 2-, 3-, 4-year-olds and up, have shot themselves or a sibling with a gun. This April a 15-year-old Greeley boy became one more fatality after being shot in the abdomen when his sister picked up a loaded .45-caliber handgun left sitting on a microwave by a man who ostensibly placed it there to protect his grandchildren.

The gun lobby continues to push for more loaded gun carry in more places - even in National Parks as of February 22, for the first time since they were banned by the Reagan Administration. Proving inordinate influence of the gun lobby, both Colorado Sens. Michael Bennet and Mark Udall voted for the measure.

Meanwhile, Starbucks has punted where other retailers have posted "No Guns Allowed" signs.

"[D]ebates around these issues belong in the legislatures and courts, not in our stores," reads the Starbucks Position on Open Carry Gun Laws. Starbucks executives plead their customers' forbearance to not place its partners in a "potentially unsafe position" by requiring them to ask "law abiding customers to leave our stores." At least acknowledging the potential danger of guns carried by the so-called "law-abiding," Starbucks disregards the rights of customers to be free of fear, violence and intimidation while purchasing their double mocha lattes.

Gun lobby claims that only law-abiding citizens have concealed weapons licenses are belied by numerous studies. A year-long study of the Texas concealed gun carry law (CCW) published in the Los Angeles Times (10-3-2000) revealed that more than 400 convicted criminals had been issued concealed carry (CCW) permits in that state. The Violence Policy Center found that in the first 5 years after the Texas law was passed, 5,314 of the 218,661 CCW holders were arrested for various crimes, including murder, kidnapping, rape and theft, or were found to be mentally unstable. Over that period, license holders were arrested for weapons-related crimes at a rate 81% higher than that of the state's general population age 21 and older. Because the gun lobby has pushed for secrecy, it is often not known when a criminal is a CCW license holder.

Promoting a might-makes-right rule-of-gun culture, the gun lobby will not rest until expanding guns into every corner of the universe. U.S. campuses are now heavily "targeted." On February 1, Rocky Mountain Gun Owners executive director Dudley Brown held a press conference at Colorado State University protesting the ability of the CSU Board of Governors to vote on a campus gun ban. CSU is reportedly one of the few colleges/universities in the nation without a policy prohibiting guns on campus. Brown's group hosts annual "Fun Shoots" (endorsed by the NRA) with military weaponry, like the .50-caliber sniper weapons with a range of 4 miles. He has acknowledged that its 2000 Fun Shoot in unincorporated Adams County was too close to the flight paths of Denver International Airport to suit the FAA.

Utah is the standard for relaxed gun carry. Their state Supreme Court ruled against university prohibition of guns, opening up concealed gun carry on campus. It is said that virtually anyone over 21 in Utah with no history of mental illness, family violence or felonies, can complete a cursory test about the law and handling firearms and obtain a permit to carry a concealed weapon just about anywhere in the state.

Nevertheless, wrote Joe Hallett ("Concealed-carry guns: Risk of misuse carries double standard," Columbus Dispatch, 1-27-02), Utah Republicans were required to check their guns into guarded lockers at the door of their 2001 annual state convention in Salt Lake City where Vice President Dick Cheney delivered the keynote address. (Given Cheney's gun prowess, he might well have been grateful). Subsequently, law enforcement and the Salt Lake Olympic Organizing Committee deemed it too dangerous to allow law-abiding citizens to even check their guns in storage lockers outside the 2002 Olympic venues, where guns were strictly prohibited.

The rationale of the Secret Service and law enforcement of course was that the odds of the vice president or anyone getting shot increase proportionally with the number of guns in the audience. Starbucks might well take note - don't all citizens in public locations deserve the safety precautions granted to a vice president?

As a crowd of 20 or so protested Starbucks' policy in Denver on a recent Sunday in April, a gun proponent approached to voice his disapproval. Told that some of the people protesting had experienced the shooting of family and friends, he pulled up his sleeve to reveal an old gunshot wound. "A friend accidentally shot me," he said, proving the point that everyone is vulnerable to gun accidents. In Boulder in 1996 a concealed gun permit holder, trained to be his gun club's safety officer, accidentally killed a friend's beloved daughter when the gun he was cleaning and believed was not loaded, discharged through a common apartment wall.