Starbucks opened its first upscale café and roastery on Friday in hopes of tapping into the small but growing market of coffee connoisseurs.

Over the next year, the company has plans to open at least 100 stores roasting and serving rare, small-batch coffee beans in major U.S. cities. Starbucks established its inaugural Reserve Roastery and Tasting Room in Seattle, just nine blocks from its original café.

“We’ve dreamed about this moment when we can open up such an immersive experience, where we can demonstrate all the aspects of drama, romance, theater of roasting coffee,” Starbucks Chairman and CEO Howard Schultz said during an appearance on CNBC, as the new store's baristas bustled behind him. “It’s the Willy Wonka of coffee.”

But don’t expect any Charlie Bucket types to shop there. The beans at Starbucks Reserve -- branded with a star and a capital R -- sell for as much as $45 per pound. 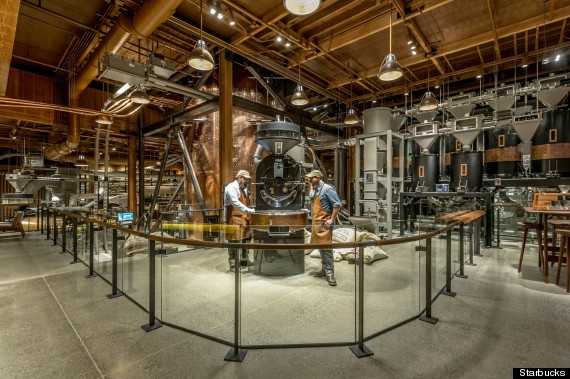 The new, 15,000-square-foot facility has large copper coffee dispensers and candy store-like displays of “micro-batch” beans, described on tablet-sized chalkboards. Quotes such as “unreasonable passion has led us here” are carved into the wooden bars at which customers can order a pour-over -- that is, coffee made by straining hot water from a kettle through a cone-shaped filter placed above the individual mug.

Starbucks has faced increased competition in recent years as its main rival, Dunkin’ Donuts, has expanded to the West Coast and small coffeehouses proliferate around the country. Now the java giant wants to take on trendy newcomers such as Blue Bottle Coffee and Stumptown Coffee Roasters.

The U.S. coffee market, worth $27.9 billion last year, is expected to grow to $33.7 billion by 2018, according to data from research firm IBISWorld cited by Reuters. The data do not separate revenues for high-end coffee sellers.