No more fighting for outlets at Starbucks. Soon, you'll be jockeying over a wireless recharging mat.

Starbucks announced Thursday that the chain will roll out wireless charging stations at its stores around the country, starting with stores in the San Francisco Bay Area.

The chargers are Duracell Powermats. Here's what they look like: 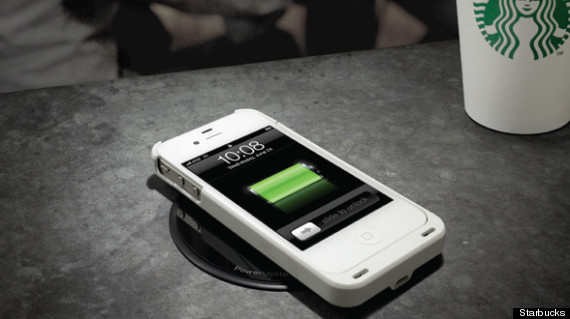 After focusing on the west coast in 2014, the charging stations will come to bigger cities across the U.S. in 2015, Powermat President Daniel Schreiber told The Verge. Each store should have at least 10 Powermats, he said.

Starbucks previously did a test run of the Powermats in Massachusetts.

The company may be a bit ahead of the curve with the charging stations. Certain smartphones are built to be compatible with the Powermats, including the Asus and Kyocera Hydra Vibe. But if you don't have one of these phones (looking at you, Apple fanboy), you'll need a charging accessory. Duracell is selling compatible cases for iPhones for $29.99. There are also small "ring" accessories you can plug into iPhones to get the wireless charge, but they're not available to purchase yet, Schreiber told The Huffington Post.

But they will be available for purchase in "another week or two," Schreiber told The Huffington Post.
The Powermat rings will cost $9.99 for a ring with a mini-USB and $12.99 for an iPhone compatible one.

The coffee chain could also be banking on Apple adopting the charging capability soon. CNET noted that Starbucks' adoption of Wi-Fi over a decade ago helped bring that technology into the mainstream.

But if you're planning on frequently refueling on both caffeine and battery power at Starbucks, take note: According to Gizmodo, too much wireless charging can damage your battery. For a quick buzz, however, it's a great option.

CORRECTION: This article incorrectly stated that the LG G3, Nexus 5 and various Nokia phones are compatible with the Powermat; they are not.

This story has been updated with a comment from Powermat.