From Mexico to Alaska, starfish have been mysteriously melting for more than a year. When a starfish first gets sick, its arms pretzel up and white lesions form on its skin. Next, the starfish, normally plush with water absorbed to keep its shape, starts to deflate. Then suddenly, its limbs begin falling off. Once symptoms start, it can take only a few days for the starfish to disintegrate and die.

The illness has been dubbed "sea star wasting disease," and it emerged and spread rapidly along the Pacific coast last year. But marine biologists only had a few hunches -- global warming, perhaps? -- as to what was causing the deaths of millions of these animals.

Now, a massive new study has narrowed down the cause of what's liquefying this lynchpin species. The findings, from a diverse group of invertebrate biologists, geneticists, statisticians, veterinarians and virologists, were published this week in the Proceedings of the National Academy of Sciences.

It's a virus that's sweeping the starfish, researchers say. In fact, it's the first starfish virus ever discovered.

"Prior to the study, there was almost nothing known about the pathogens of sea stars," said Ian Hewson, a marine biologist at Cornell and co-author on the paper.

Infused with rapid response funds from the federal government, the researchers were marshaled to identify the cause of the starfish deaths, which have the potential to destabilize entire ocean ecosystems.

Despite appearing to passively lay on the ocean floor, starfish (or sea stars -- the preferred term among biologists, since the animal is a distant cousin of actual fish) are one of the ocean's most voracious predators. They suck up sea urchins, mussels and other animals with their underside mouths. Many of the animals they eat have no other natural predators, so without sea stars, their populations can explode and drive out other sea floor species, like the coral that supports coral reefs.

"Typically, finding the cause of a disease takes years to decades," Hewson said. He said his team rushed to find the cause in part because the public was worried that some environmental contaminant may be responsible for the illness.

After Hewson's team failed to spot any new bacteria infecting starfish tissue under a microscope, they decided to use a NutriBullet to make "sea star smoothies" to look for what they couldn't see -- viruses. They blended up sick sea star tissue, dissolved the mush to get "virus-sized particles" and injected the solution into healthy specimens held in tanks. If the scientists pasteurized the smoothie with heat to kill any potential viruses, the animals didn't fall ill. But if they didn't treat it with heat, the injected sea stars started wasting away.

The researchers also found the virus in museum samples dating back as far as 1942, suggesting the latest epidemic is an outbreak of a long-existing disease.

"The experiments reported in the paper are pretty convincing," said Bruce Menge, a professor of marine biology at Oregon State University who was not involved in the study.

Why the virus has emerged now, and how the virus dissolves tissue, remain open questions. Recent overpopulation might have triggered the outbreak. One theory is that sewage from West Coast cities may be feeding tiny plankton floating in the water. Sea urchins and other animals eat the plankton, which in turn provide more prey for the starfish to grow their numbers. But more research is needed in order to firmly make that connection, Hewson said. 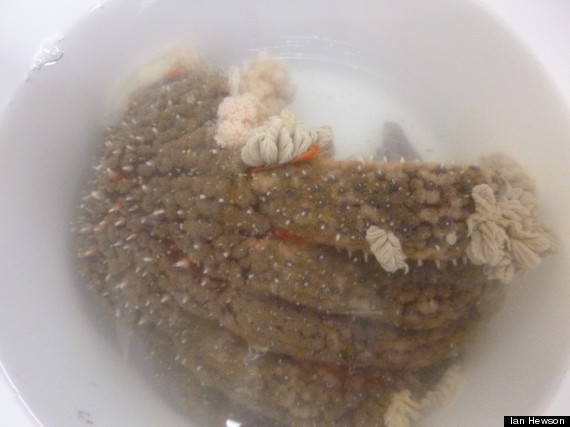 A sunflower star in an advanced stage of the wasting disease. (Ian Hewson)

Mass starfish deaths in the past have been linked to warmer water. But recently, the ocean off the U.S. West Coast has been cooler than normal.

"I don't think the present outbreak has been connected to warming," said Amanda E. Bates, an ocean researcher at the University of Southampton whose research has made a connection between high water temperature and starfish morality. "However, we know that if animals are exposed to temperatures that are warmer than what they are used to -- such as a very hot spring -- they have reduced ability to fight off the disease."

"The broad scale of the event suggests that some oceanographic change may be the trigger," Menge said. He suggested that human-related causes, like global warming or ocean acidification, should be investigated.