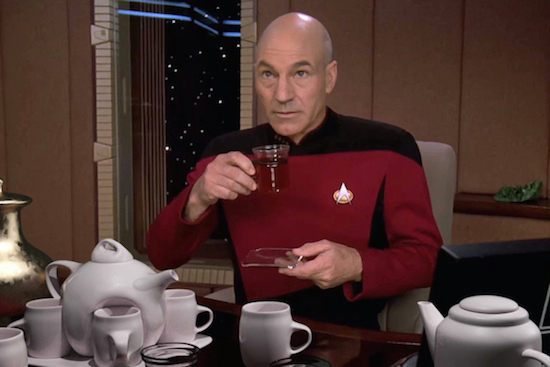 Jan Van Den Hemel creates some very offbeat, yet entertainingly subversive sci-fi remix videos. He excels in building quirky mishmashes of Star Trek: The Next Generation, utilizing footage of Patrick Stewart (aka Captain Picard) in his ongoing quest for the perfect hot beverage, as well as clips featuring the never-disappointing Commander Riker (Jonathan Frakes). The quirky charm evident in the "Riker Episode" suggests that Frakes should have been given his own television series back in the day -- or at the very least, a late-night talk show. Who else can pack that much wry charisma into a clip lasting less than two minutes?

Van Den Hemel, who puts his TNG collages together using open-source 3-D animation tools, set some time aside to discuss Jean-Luc Picard, Jonathan Frakes, tea, space babies and the animated feature he's trying to get off the ground.

Carl Pettit: What do you do when you're not making or remixing sci-fi videos? What's your day job?

Jan Van Den Hemel: To pay the bills, I work in an office. I actually get up really early to do my creative stuff because the rest of my daily grind is quite tiresome. I used to do movie-related work after film school. For example, I worked in a visual effects company for a while, but generally the hours in that industry are kinda crazy, leaving little time for a normal life, let alone your own creative projects.

How many TNG episodes did you comb through to piece "Tea with Jean-Luc" together?

This edit uses footage from 16 different episodes, hopefully quite seamlessly. For instance, when Riker enters and his feet knock a teapot over, that's actually Wesley Crusher's (Wil Wheaton's) feet. It took a while to find good footage of Riker prancing around in the ready room -- that was probably the biggest challenge. He's always standing still when he's delivering his lines! 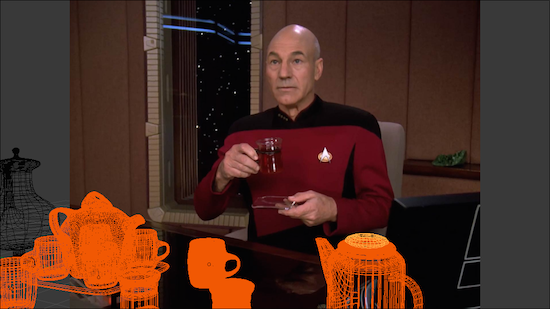 Are you a fan of tea?

I drink a lot of White Earl Grey (hot, obviously). I posted this video at noontime in Europe, while most of America was still asleep. Most of the initial reactions to the video were from my second biggest target audience, the UK. The initial discussions in the comments section were polite discussions about tea, and whether or not Earl Grey goes with milk. The argument was settled because of the fact that Picard is, in fact, French, which explains his barbaric non-milk infused tea drinking behavior.

Can you tell us about the animated feature "Robots and Chocolates" you're working on?

It's a 90-minute animated feature in a fantasy/sci-fi world, with lots of robotics. A depressed dictator addicted to chocolate forces Amaro, an immigrant from a cacao farm town, to lead an invasion so he can turn the town into a chocolate factory. There, Amaro meets Jasmine, a beautiful girl, and three strange robots. 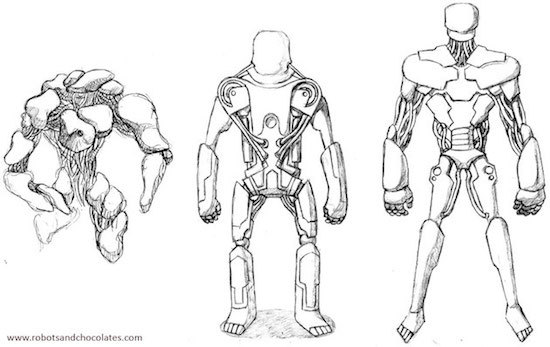 It's written by my wife and designed by myself. I've been working on this for a few years, most of which I spent learning everything I could about animation, which is why I can now do CGI stuff for the [sci-fi] edits as well. Our goal is to make something beautiful and touching, like a Studio Ghibli film. 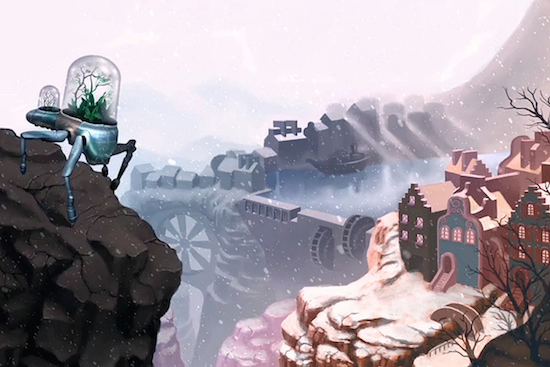 What gave you the idea for your famous "Riker" episode, which caught the attention of Jonathan Frakes himself? How many episodes did you take cuts from?

I really liked the intro sequence for FX's Louie, and started playing around with making something with that kind of visual rhythm and music. In fact, the temporary sound track [while editing] was the song "Louie, Louie." And then Andrew Hussie (creator of Homestuck and "MS Paint Adventures"), who I collaborate with on these had the idea of the Riker space creature [space baby], which made me laugh out loud when I read his e-mail, so I decided I had to make it, even though I'd stopped for five years! 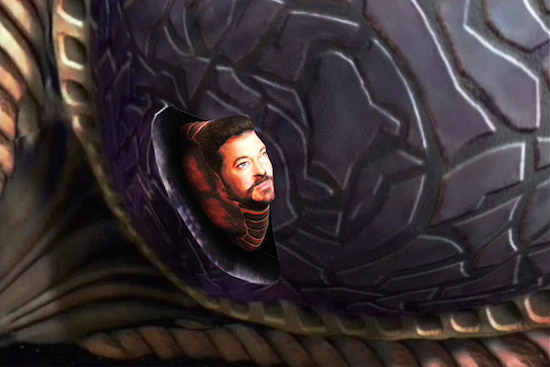 For the bulk of the edit, I used footage from three episodes, with some exceptions where a specific shot was needed. For example, when Riker is eating, most of that is from "A Matter of Honor" from season two -- except for the shot where he puts down his napkin, which is from "The Vengeance Factor," from the next season. So his outfit suddenly changes, although I don't think it's that noticeable. 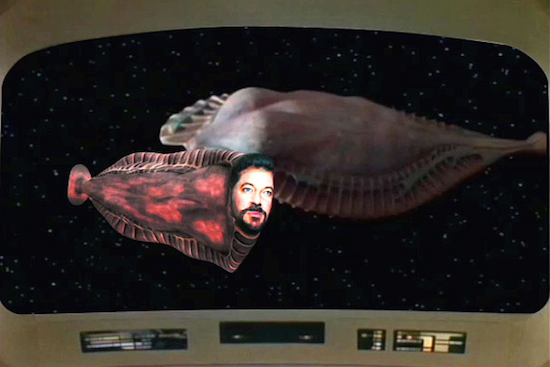 Browsing through hours of footage made me realize that Jonathan Frakes is a really great actor. You just kind of take him for granted, because he is Riker. But that is, in fact, a testament to the actor's real skill, like Leonard Nimoy with Spock. Literally every frame of reaction shot of Jonathan Frakes is gold for these kinds of edits.

What's coming down the animation pipeline for you?

Most of my work on Robots and Chocolates of late has been technical R&D. I'll get back to posting some interesting visuals soon. I've also been doing some animation tests for a short TV series, which looks very promising. I don't really want to spoil it yet though! The style will be hand-drawn, with watercolor backgrounds, and it will be funny.

As far as the funny edits are concerned, I'm working on a Voyager/Alf crossover episode, as well as another TNG one where Picard and Data continue their art rivalry, which is a trope established in earlier edits. And for podcast fans, you can hear me talk about Trek on Byron Hussie's new podcast. I want to add more and more of my own stuff to these edits, gradually morphing them into something completely new.