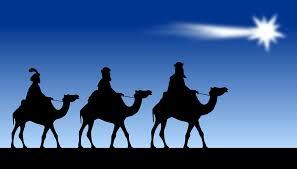 Following the light of the "Star in the East," Christian tradition says, led the three Magi to Jesus. That was an Interfaith event as the Magi probably refers to an Eastern religious order of astronomers. Guess what? The text says they came to worship a Jewish baby! It was also an act of moral courage because these "Wise Men" resisted violence by refusing to report back to Herod that they had found the baby Jesus.

Today, hate speech and actions against American Muslims are casting a pall over our country and undermining our values. The good news is that many are shining lights into the darkness being spread by anti-Muslim fear-mongering and hateful speech, and many are also resisting violence.

As a Christian, I believe light shines in the darkness "and the dark will not overcome it" (John 1:5).

My faith is strengthened when, in this season where we hope for peace on earth and good will to all, I see all the light being shared as people of so many faiths and humanist values are countering this truly vicious and dangerous hate against Muslims with light and love.

Do not let the nighttime of hate blind you to how much has changed. It may seem that we are back to the dark times right after 9/11 when Islamophobia skyrocketed. But we are not. So much work has been done and is being to strengthen interfaith relations from then to now that there are tremendous signs of light and hope, if we will but see them.

One example that involves not only words of solidarity, but deeds, is the call by the students, staff and faculty of Chicago Theological Seminary where I teach, "inviting Christian women across the country to live into a Christ-like Christmas by wearing a hijab for the remainder of Advent in order to stand in solidarity with our Muslim sisters."

As wearers of the hijab, Muslim women are more identifiable than Muslim men. As a result, it is often women who are the victims of anti-Muslim hate crimes. It is crucial to stand in solidarity with them, and, as CTS President Alice Hunt has emphasized, "to embrace love instead of hate, community instead of alienation, and respect instead of fear-mongering." It is important to recognize that this initiative was proposed and sponsored by Muslim members of the CTS community, and that #SolidarityHijab actions should be by invitation and in inter-religious collaboration.

Our full statement on Chicago Theological Seminary Stands in Solidarity with Our Muslim Neighbors may also be found on the seminary website.

For a demonstration of how to wear the head scarf watch this video of two CTS students, Faatimah Knight and Leenah Safi, teaching some CTS staff and faculty one way to wear the hijab.

Words and actions are thus absolutely crucial, and another inspiring example is
Interfaith Youth Core. IFYC, founded by Eboo Patel, has been working steadily since 2002 to build a movement of interfaith cooperation, and we (I am a trustee) have seeded the country with 1,100 young people trained in the science and skills of interfaith understanding and action.

These IFYC graduates are taking action and making courageous stands against anti-Muslim screeds.

Joshua Stanton, an IFYC student graduate from Amherst College, is now a Rabbi at a large Jewish congregation (Congregation B'nai Jeshurun in Short Hills, NJ) and he uses his station as a religious leader to speak directly to the issue of Islamophobia and the importance of interfaith literacy and cooperation.

Rabbi Stanton recently wrote a very powerful Huffington Post column called Register Me Too, Mr. Trump in direct challenge to the GOP candidate's proposal for a national registry of all Muslims living in the United States. Citing the story of the Danish Jews and the willingness of Danes to defy the Nazis, Rabbi Stanton took a stand. As a Jew, if Muslims are forced to register "or worse," then register him too. This piece was shared and liked thousands and thousands of times.

Truly, this is not 2001. More creativity in solidarity is being seen than ever before.

From the west coast to the east coast and in between, points of light are casting out the darkness of Islamophobia. More than 2,500 religious leaders signed an open letter drafted by Rev. Dr. Chuck Currie and circulated by Faith in Public Life also objecting to the GOP candidate Trump's proposal banning Muslim immigration. Rev. Jennifer Butler, CEO of Faith in Public Life, said forthrightly, ""As a Christian and a Presbyterian pastor, I'm ashamed that Trump claims to share my religious tradition. He should suspend his campaign and go back to Sunday school."

Adopt-a-Mosque was recently founded by Rev. Dwight Lee Wolter Pastor of the Congregational Church of Patchogue. This project is based on "fifteen years of experience of interfaith initiatives" and has a "How To" page and etiquette instructions for reaching out and being a good neighbor.

Los Angeles County, the site of the San Bernadino attack, has seen important witness. Reverend Susan Russell -- a native of Los Angeles and an Episcopal priest and pastor from All Saints Church in Pasadena went to speak before the L.A. County Supervisors in favor of this resolution:

We as the County of Los Angeles: Recognize that the terrorists who committed these acts, motivated by violent religious and political extremism are to blame, and that no religion or race or ethnicity is responsible for these acts, and that fear-based stereotyping and scapegoating creates an atmosphere conducive to Islamophobia, xenophobia, discrimination, hate, and bigotry.

An interfaith rally in L.A. on Dec. 13 showed solidarity with the Muslim Community. Dozens joined together to speak. Imam Moustafa Al-Qazwini with the Shia Muslim Council of Southern California said movingly,"On behalf of American-Muslim community, again and again, we condemn these atrocities. We condemn these acts of genocide and acts of terror that took place in San Bernardino and anywhere in America or Paris, the Middle East or anywhere in the world."

In Colorado Springs, a town with the reputation of being about 'God and Guns' and where recently a Christian terrorist shot up a Planned Parenthood clinic an Islamic Society Open House drew a large crowd of well-wishers from other faiths.

One of the United Church of Christ members who attended emailed me that "the standing-room-only goodwill was palpable. Even in extremely conservative places like Colorado Springs, there is hope and optimism! There was a great sense of coming together...a ray of hope in the darkness of the present national climate."

Seventy-eight clergy in the D.C. area signed a statement following the San Bernadino shootings, authored by Rev. Timothy Tutt of Westmoreland Congregational United Church of Christ. The statement offered prayers and support, committed the signers to continued teaching/preaching of peace and justice, called on congress to pass anti-gun violence legislation, demanded that the gun lobby act responsibly, and asked media to report fairly and accurately. Sent that statement around to my clergy colleagues in D.C. area. Forty religious leaders showed up at a press conference to press the same themes.

An important exchange occurred the next week, when Christians from the same Westmoreland Church going to the Islamic Center on Massachusetts Ave in D.C. and holding signs saying "Christians Say Welcome, I Support Peace, I Support Compassion, etc." But the Imam, when contacted, thought even such a "positive protest" could inspire negative protestors and invited church members for prayers and conversations. Instead the church members to come for Friday prayers and to engage in conversation. Church members took him up on the offer.

The lesson in this last point of light is the absolute imperative that Christians or persons of other faiths and humanist values who want to stand in solidarity with Muslims must consult about their actions and listen to the concerns of the Islamic community. It is always possible to make things worse, as the Imam in DC pointed out.

For every point of light I am highlighting here, there are hundreds of others.

Watch and see and know the truth: the darkness cannot overcome the light.