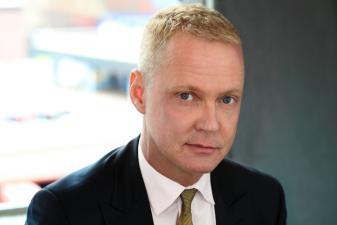 "There are small parts. I hate to shatter that stupid metaphor, but there are."

Michael J. Burg whispers his wisdom conspiratorially to me across our luxurious table at the Russian Tea Room. The actor and director is about to have a banner year of high-profile projects back to back, including a recurring role on Person of Interest and appearances in two HBO series, one the greatly anticipated rock-and-roll brainchild of Martin Scorsese and Mick Jagger. But today, while I converse with Burg over chicken Kiev like the Old Hollywood elite, he's giving me a lesson in the working actor's reality. It ain't all peaches and cream.

"When you get small parts," Michael elaborates, "you just have to do them the best you can, hope it ends up in the movie, and be happy for the experience. But if you get a small part that's integral to the storyline, it's no longer a small part. It's a part."

Such incidental yet significant roles have comprised Burg's career, from his earliest days as Brian on All My Children to the sardonic bartender in this year's Love Is Strange. It's been an interesting ride for this farm boy from Missouri, who claims he was bitten by the acting bug in junior high school when he saw Oscar winner and American Theatre Hall of Fame inductee Estelle Parsons perform the one-woman show Miss Margarida's Way. A few short years later, at age nineteen, Burg moved to New York to attend the American Academy of Dramatic Arts and soon afterward wound up studying with his idol in her private classes.

I had written Estelle a long letter about seeing her [in Miss Margarida's Way] and a week or two later I got back this handwritten note: "Dear Michael, I don't know anyone who teaches worth recommending. Try the Actors Studio. If I ever teach, I'll contact you. Estelle Parsons." Well, two years later I get a phone call that Estelle had my letter on file and was teaching a class and would like to meet me. I took the class and it was just a great relationship. She taught me everything I know. She's an extraordinary person and just has the biggest heart that is sort of hidden beneath this veneer of her matter-of-factness.

And indeed, Parsons' suggestion to "try the Actors Studio" wasn't far off the mark either -- after awhile of teaching Burg the craft, Estelle suggested her pupil for membership in the legendary organization.

I didn't audition [for the Studio]. That's a fallacy. A lot of people don't audition; they're invited because of their resume or their talent. At that time the Studio had hired Frank Corsaro to be Artistic Director. Frank was constructive, passionate, action-oriented, vibrant -- and he saw that the Studio desperately needed new blood. So he told a number of prominent acting teachers and people on the Board, Estelle being one, that if they knew anyone who was really talented they could recommend them. Estelle recommended me, and Frank made me a member.

From the outside it seemed Michael was well on his way to a promising career, but alcoholism and venomous "friends" proved major stumbling blocks for quite some time.

Nobody goes to Alcoholics Anonymous on the wings of victory. I crawled into A.A. in 1990. I don't have 24 years of continuous sobriety - people go off their diets, so to speak. But alcoholism and addiction, they can just get you even when you think they won't. [A.A. founder] Bill Wilson said, "It's a daily reprieve based on our spiritual condition." So it's more than just abstinence. You have to take care of your spiritual, emotional, and mental well-being.

Once committed to healthy living, Burg approached acting with new vigor. The early 2000s led to one of his most notable (and personal favorite) projects, The Audrey Hepburn Story, in which he played Truman Capote opposite Jennifer Love Hewitt's Hepburn as the two struggle to complete filming Breakfast at Tiffany's. Burg was vividly affected by his leading lady's generosity on set, recalling a rainy outdoor shoot in Montreal during the dead of winter where Hewitt, huddled between two big heaters, noticed a few elderly extras on the verge of freezing and immediately invited them to take her place in the warmth. "No big star would do that, you know? 'Love' is the most kind, sweet, adorable person. She puts everyone at ease just by being there."

Hewitt also impressed Burg with her metamorphosis into the role of Hepburn.

She has this little button inside; she'll just be this normal girl, and all of a sudden she'll push this imaginary little button and a Christmas tree of charisma and talent will immediately appear from within. It was extraordinary because I'd never seen that. Most actors have to find and force and drill for it and have a strong preparation. She would just find it, push that little button, and this fabulous talent came to life.

As we rhapsodize about Hewitt (an actress I greatly admire too), I remind Michael that he's not only played Truman Capote thrice on film and TV, but he also cameoed in Bennett Miller's Capote starring Philip Seymour Hoffman. Did the two ever compare notes on their approaches to the notorious author? Actually, Burg confesses, Miller phoned him at home just before filming began to warn him against doing just that. "He was protecting Phil, who was very sensitive [about the role], and making sure I wasn't some asshole actor who was going to go, 'Hey, I did this before you.'"

Precautions for artists' processes aside, Burg considered the shoot a joy -- or at least he does now. "It's funny," he says with a rueful laugh, "I can't appreciate something dreamlike coming true in the moment. But auditioning for Bennett Miller and [casting director] Avy Kaufman, having Bennett call me at home and then working a long day with Phil Hoffman was wonderful. It's too bad it's taken me years to appreciate it. At the time it was just another little part."

Little parts are leading to much bigger happenings for Michael. He had the time of his life as a German record producer in the Scorsese-Jagger project, where he worked alongside Bobby Cannavale, Ray Romano, and many others. Of course, such breaks don't often come without challenges. There was a shock the first day of rehearsal when Scorsese handed Burg -- who doesn't actually speak German -- eight pages of new script written only in the language.

"I could've really been replaced right there," Burg admits, "but they were very accommodating and I worked my butt off with two coaches. It was like grace under fire except I had very little grace."

Sounds as though someone's starting to appreciate dreams in the moment after all. "That was over the rainbow," Michael asserts. "Martin Scorsese's in the Jennifer Love Hewitt category of extraordinarily good person -- lovely and very animated. He also gets extra points for being a genius."

But the fun won't stop there. Recent years have found Burg in demand as a director and producer too; this summer's The Basket Weaver reunited him with actress and playwright Blaire Baron Larsen (a longtime friend since the Estelle Parsons days), and he is currently at work producing a suspense thriller called Eyes with husband-and-wife team Robbie Bryan and Christie Botelho to be released in 2015. For what Burg describes as "a career plagued with no momentum," his now seems to be pressing on full steam ahead.

What's been the hardest thing for him in surviving this business?

Acceptance. Acceptance of the fact that not everybody's the star, that 99% of the time I don't get cast from an audition, that usually it's impossible to put a square peg in a round hole. In A.A. they have the serenity prayer, "God grant me the serenity to accept the things I cannot change." And then the second part is, "Courage to change the things I can; and wisdom to know the difference." That's more difficult. It can be very hard when you're a late bloomer.

Near the end of our lunch, Burg good-naturedly chides me for leaving my fig compote untouched. "You should always try something new," he says, blue eyes sparkling mischievously.

It's clear that whatever Michael J. Burg tries, he has learned to try with humility, compassion, and openness -- and completely devoid of fear. Sometimes you've got to appreciate the little things before you can truly go big.