I Came Very Close To Giving Up...

While retire overseas is my beat, it's not my personal agenda. I didn't move overseas to retire but to run a business, first for someone else, now for myself.

Some 18 years ago when I left my hometown Baltimore, Maryland, headed for Waterford, Ireland for work reasons, I carried with me clear marching orders from my partner of the time:

Establish an office, an EU base.

Our first year in Waterford, my husband Lief and I pushed ahead, stubbornly, persistently, enthusiastically even, through challenge after challenge. We'd come to establish an office for a direct-marketing publishing company, but no such industry existed in Ireland and hardly any industry whatever existed in Waterford. The pool of available local labor was thin. For marketing, fulfillment, and editorial support staff we hired people with no relevant experience. They'd worked as receptionists in hotels, hands in local stables, cashiers in local shops. We tried to identify people who seemed to want to learn and then set about trying to teach them something. 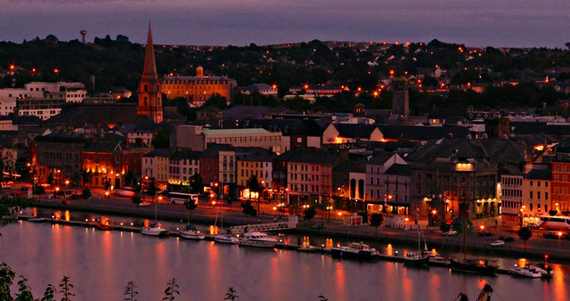 Staffing our fledgling office was tough but so, too, frankly, was just about everything else, including finding the office in the first place. We didn't want to be located in the new "industrial park" being built on the outskirts of Waterford City (it looked like a prison compound to me), but other options for commercial space, like options for staffing, were limited.

Opening a corporate bank account, getting a company credit card (these were uncommon in Ireland back then), finding an Irish tax accountant to keep us compliant, drafting employment contracts (which, we were told, had to allow for things like regular tea breaks)... these kinds of administrative support tasks were also a struggle.

Meantime, Lief and I, only recently married, were struggling on every other front, as well -- struggling to solidify our new family unit, struggling to adapt to life in Waterford, struggling to communicate our situation to those back in Baltimore, where the publishing company we were working for was based. They couldn't understand how or why it was taking so long to do simple, straightforward things like rent office space, open a company bank account, and hire core staff. We couldn't adequately explain the delays or the struggles, because we didn't understand them ourselves.

Today, 18 years and a half-dozen starting-a-business-in-a-foreign-country-from-nothing experiences later, I can explain. Someone who hasn't done it isn't going to understand, but it's just the way it goes.

Way back when in Waterford, though, I was among those who hadn't done it. I didn't know yet that the only way through the challenges is through them. Perseverance is perhaps the biggest prerequisite for the successful entrepreneur abroad.

About a year after we'd landed in Waterford, I'd about had it. I was worn out trying to teach a bunch of sometimes-interested folks how to build and run a direct-marketing publishing operation. I was worn out by social charges, Bank Holidays, twice-daily tea breaks, bankers who didn't return your phone calls, tax auditors who'd never heard of the business we were in and couldn't make heads or tails of our financial statements...

I was lonely for people who understood my questions when I asked them without my having to provide endless background and context. I wanted to be among folks who'd shared at least some of my experiences, personal and professional. Because telling every story from scratch every day all over again... about how to produce a magazine, how to publish a book, how to sell a subscription, and then how to renew it? That was getting old.

Nearly desperate, I called my partner for this venture, based in France at the time, and told him I wasn't sure this establish-an-office-in-Waterford thing was going to work out. He told me to sit tight. He'd fly over from Paris as soon as he could for a visit.

Bill came to Waterford and spent a couple of days in the office, meeting with me, Lief, and the little team we'd assembled by that point. We'd just moved into new office space at this time, a big improvement over our original (windowless) digs. The new office was in a three-story townhouse in the heart of Waterford City with a Georgian front door that I'd had painted red.

The afternoon he was leaving for the airport and his return flight to Paris, Bill and I walked out the big red front door and stood for a minute on the landing. Bill looked up and down Catherine Street, at the other Georgian-style townhouses and then back at the red door of our place.

"You've planted a seed here," he said. "You've really started something. It will continue to grow...

"It'd be a shame to walk away from this now."

The second most important thing for an entrepreneur abroad to possess, along with perseverance, is perspective. You've got to be able to see what's before you in the context of the bigger-picture agenda. Most of the time, you've got to do this on your own, reminding yourself that you're making progress.

Despite the challenges and the struggles, you're building and growing. You're on track, moving ahead...

Sometimes, though, it will get hard to believe yourself. I was lucky way back when in Waterford to have someone to call for a dose of perspective when I needed it. Had Bill not been around to point out that day that, struggles to get to that point aside, there I was at that point... I might have called it a day.

I might have moved back home to Baltimore and the like-minded company I was longing for. Might, indeed, have walked away... meaning that the 18 years since would have played out very differently...

Original feature: Here's The Secret On Starting A Business Overseas

11 FAQs On Business And Residency In Dominican Republic

10 Business Opportunities For The Entrepreneur Abroad