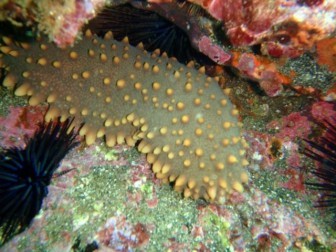 After considerable debate, representatives of the Galápagos National Park and the fishing industry have agreed to postpone the start of fishing for sea cucumbers until August 10th, according to the Galápagos newspaper and online publication Periódico El Colono. A 45-day season for sea cucumbers had been scheduled to get underway on the first of August, but fishermen weren't happy with the timing and requested the postponment.

Because the sea cucumbers are endangered and the catching of them by fishermen has stirred controversy, the original agreement between the authorities and fishermen had been reached quietly without the usual public announcements. But when the agreement was leaked through social media, fishermen complained about it while most Galapagueños ignored the news.

Their attention these days is focused on future protests against changes in the law that they feel could harm the environment and hurt them in the pocketbook. Cost of living bonuses for Galápagos residents would be recalculated under the new Organic Law of Special Regime for Galapagos (LOREG).

As we reported earlier in Galápagos Digital, after a four year moratorium on sea cucumber fishing, the Ministry of Environment of Ecuador through the Galapagos National Park Directorate authorized the fishery from August 1st to September 15 for a limit of 500,000. The agreement between the authorities and a representative of the fisheries sector was signed July 10.

Surprisingly, in their first public statement on the matter, Friday, July 31, representatives of Fishing Cooperatives disagreed with the decision. Speaking on Radio Encantada, Dionisio Zapata, president of the COPROPAG cooperative said, "In order for this fishery to have good economic results we went to the park management to request an extension, but we were not heard." 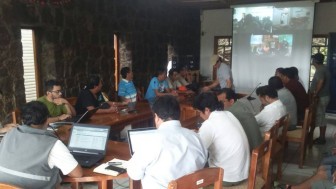 But a few hours later, the Galápagos National Park granted the fishermen's request. The fishermen say they'll use the added time to bargain for better prices for their catch. They're hoping to get $5.00 for each sea cucumber. (That would amount to $2.5 million if they caught the maximum 500,000.)

Galápagos Digital has requested further information from the Ministry of Environment and the Galápagos National Park and we'll post any responses we receive.

Due to the lack of official pronouncements about the sea cucumber fishery, many Galápagos residents haven't heard about the issue as they prepare to rally against the changes in the law governing the islands.

According to Jairo Gusqui Lopez, leader of the opposition group Frente Insular, people opposed to the new law will meet on Saturday in Santa Cruz to discuss a constitutional challenge to the law that will be submitted to the Constitutional Court of Ecuador next week.

Several groups in Galápagos have also announced they will take part in an August 13 general strike that is planned in major cities of the Ecuadorian mainland.

These are days of disenchantment in the enchanted islands.