One of the biggest problems of our time is that many low-income students, particularly those that are a minority, are not learning basic math. In fact, according to Drs. Eric Hanushek and Paul Peterson, senior fellows at the Hoover Institution, fewer than 15 percent of minority youth are performing math at the proficient level or higher. With such a push toward college and career readiness nationally, poor mathematics skills will adversely affect students' ability and willingness to pursue and complete college. College is necessary to obtain careers in architecture, engineering, computer programing, medicine and most other STEM-based industries. Without a strong basic foundation in math, having a successful career in any industry is also unlikely. This is because so many issues in business, whether as a part of a larger organization or as an individual business owner revolve around the ability to commutate percentage, decimals and fractions. Ownership splits, markups, financial statement analysis, salary negotiations, and incentive-based job performance all depend on basic math ability. Without basic knowledge of these concepts it is almost impossible to do well in any field or to engage in basic discussions and negotiations of ownership issues. Much of the determination of who owns assets in America is based on the ability to leverage academic ability, especially around mathematics.

In the organization I founded, the Network for Teaching Entrepreneurship (NFTE), in 1987 there are over two hundred basic math lessons within our standard curriculum. Start Up Math, was conceptualized and designed by Amina Brown, Senior Director of Programs for NFTE's D.C. region -- who led a team that included Executive Director of NFTE DC, Patricia Eisner Granata, Verice White, Director of Programs for the NFTE D.C. Region, Brittany Beal, and Brittany Rouse (the curriculum developers and instructional coaches), and Rupa Mohan, Vice President of Programs -- also for NFTE. The aim of Start Up Math is to identify skill gaps in basic mathematics concepts among struggling 6th-8th graders in stealth, and unassuming ways -- keeping entrepreneurship a foundational and often paramount concept in the class. While entrepreneurship is an interesting and often appealing concept to youth because it speaks to their ability to make money, successful entrepreneurship is a farfetched reality if students cannot add, subtract, multiply or divide.

"We are excited about pioneering Start Up Math here in Washington, D.C. where we hope to be the spring board for this approach to project-based mathematics and entrepreneurship instruction globally," says Patricia Granata Eisner.

The design of Start Up Math reflects best practices in teaching and learning and is aligned to 22 non-geometry Common Core 7th grade mathematics standards and is a derivative of each entrepreneurship concept of the 11th edition NFTE textbook, Entrepreneurship; Owning Your Own Future. Teachers of Start Up Math are afforded 22 comprehensive lesson plans that reflect differentiation, but that push students toward standards mastery. Two outstanding mathematics experts were hired by Amina -- one with an MBA and the other a top math teacher. Both Ms. Beal and Ms. Rouse were clear on the best and most effective ways to build and implement a project-based entrepreneurship/mathematics hybrid class that would appeal to students struggling to: 1) overcome poor mathematics skill, 2) conquer mathematics anxiety and 3) find to relevancy in course work to their everyday lives. While Amina designed the lesson plan template for Start Up Math, Ms. Beal and Ms. Rouse inputted new and original mathematics-based content. I spent several hours talking with them about their thoughts on how to teach math to kids so they could understand it at a very deep level. The implementation of Start Up Math was rolled out this past summer when teachers of Start Up Math were required to attend a five-day training. Some of the best math teachers in D.C. were selected and the training was held at George Washington University and hosted by co-director Dr. George Solomon of the Center For Entrepreneurial Excellence (CFEE).

The building of the curriculum, and the training involved showing teachers how to use Blooms taxonomy to teach basic percent, decimals, fractions, proportional relationships, statistics, probability, number lines including negative numbers, Venn diagrams, pie charts, the measures of central tendencies such as mean, median, model, range and the understanding and graphing of basic equations. Additionally, Start Up Math includes a comprehensive data system that helps teachers and students set goals, and track progress toward goals. I sat in on the training for three of the five days and found it to be fascinating. Taught collaboratively by Erica Humphries, a Certified Entrepreneurship Teacher Instructor, Brittany Beal and Britteny Rouse -- the training combined the best of entrepreneurship and math education and brought back a lot of memories of my teaching experiences in the 1980s when I was a special education math teacher in the South Bronx. I struggled for seven years -- over seven thousand hours of classroom time trying to finds ways to teach basic skills particularly math through ownership and entrepreneurship education.

The program launched this past fall, at the beginning of the school year, and several months later in December, I was fortunate enough to visit the programs in Washington, D.C. (Start Up Math's first and only pilot region) where we have seven pilot programs well underway. I first visited Eliot-Hine Middle School where Annie Zanobini is teaching Start Up Math to 7th grade students. Annie is a Mathematics Resource teacher, with certifications in Special Education and Mathematics instruction. She was a magnificent teacher full of energy. The kids lit up when she asked several business-based mathematics questions. The second school we visited was Hart Middle School, which is using Start Up Math in a class that is 100 percent Special Education. Ms. Harris, who is using Start Up Math with her 6th, 7th and 8th grade students, has an extensive and impressive background in mathematics instruction. Ms. Harris used coupons to teach, and, as I had never cooked, it was the first time I had ever held or tried to analyze a coupon. Several times I asked a question to one of the young people in the room to help me understand the use of coupons. The class evolved into a great discussion on hypothetically opening a food-based business in which students would have to identify the best ways to provide their customers with tasty food, while securing a profit. Later in the week I went to the store and for the first time used a coupon. It was great fun.

Later in the month, I visited Amber Harrelson's class at Howard University Middle School of Mathematics and Science. MS2, as it is called, is one of the District's highest performing charter schools. Ms. Harrelson, whose background spans an impressive array of STEM-based industries, teaches Start Up Math to eight classes of 6th, 7th and 8th grade students. She played a fascinating game with the students called "Assembly Line." She broke the students into two lines after which they passed down tennis balls (which were supposed to represent a product) hand in hand to see how many could go through the assembly line in two minutes. The first time both lines had seven students and one line was able to move 16 and the other line 14 tennis balls. She then pretended to lay off two employees from each line leaving each with 5 students. They were replicating a factory incidentally, and the number of balls that traveled the line decreased to 14 and 13 respectively. Around both lines she created an income statement, showing how much money would be made by each line, the labor expenses, and the material expense. It was a fascinating lesson that incorporated manufacturing concepts and the mathematics of an income statement. It was a beautiful moment to see kids in classes talking about business ideas, and at the same time learning about many math concepts including diagrams, percentages and decimals.

The second class I visited that day was at Jefferson Academy with Lincoln Campbell which had 25 7th graders. Lincoln, who is an amazing teacher, teaches both entrepreneurship and engineering. A lesson focused largely on marketing research, infused the concepts of rates, and proportions. As an opening, this class was focused on analyzing the marketing difference between Takis and Hot Cheetos. Asking the student to focus on the demographics, psychographics and marketing strategies of both Taki and Hot Cheetos manufacturers, Lincoln embedded a stellar lesson on percentages and decimals as well. It was a fully integrated entrepreneurship-math class. The young people were full of enthusiasm. Lincoln used the integration of both market research and mathematics-concepts to teach Venn diagrams, cost per unit and budgeting. Afterwards I interviewed two students, Ajani and Aymee. Not only did they rave about the Jefferson Academy and its commitment to a rigorous curriculum and high academic standards, but also about Lincoln as well. Lincoln, who wants to get an MBA, has also come up with his own business idea in the health food industry. Both Johnny and Aymee had business ideas and plan to write a business plan about their ideas soon. Start Up Math has an instructional coaching cohort dedicated to supporting teachers with modeling, co-teaching, co-planning, and classroom level data analysis. 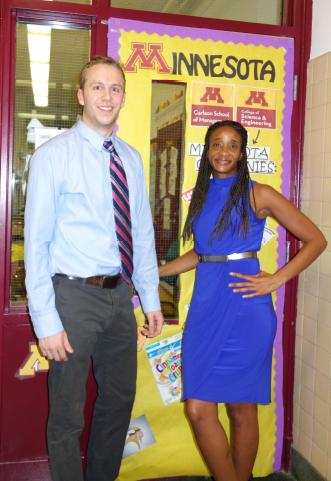 Principal Natalie Gordon and NFTE teacher Lincoln Campbell in front of his math and entrepreneurship classroom at Jefferson Academy in Washington, D.C.

So far the feedback from teachers has been very good. Each teacher has stressed the importance of school leadership in setting and maintaining expectations for high academic student success and teacher practice -- a key need for the implementation of Start Up Math. In fact, Lincoln Campbell noted that Natalie Gordon, the Principal of Jefferson Middle School accepts nothing less than the most rigorous of curriculum for her students and the most creative and pedagogically sound practices at her school. Amber Harrelson noted that her principal, Allison Artis, the principal of Howard University Middle School of Mathematics and Science is always pushing for better for her students, and expects her teachers and students to always keep high academic achievement and ownership of one's destiny in the forefront of their minds. Tynika Young, of Eliot-Hine Middle School, has noted that while she is excited about how much her students are enjoying the program, she wants proof of its effectiveness. We are still navigating this path, and looking to learn more about Start Up Math's effectiveness. In fact, next year, in conjunction with NFTE-DC's local Board of Advisors, we are hoping to identify a comparative group to obtain more data on Start Up Math's success. Also, Amina has reached out to several research and STEM-based organizations to which to partner, having them to further look at Start Up Math's design.

From a fundraising standpoint, we're delighted at some of the possibilities that Start Up Math is affording NFTE. We've been able to secure funding, and consideration from some of the most prominent local and national family foundations, and grant-based organizations under the direction of Patricia Granata Eisner. I am delighted to see Startup Math being implemented throughout the Washington, D.C. middle schools and look forward to writing more about it as the program develops.