"The many great gardens of the world, of literature and poetry, of painting and music, of religion and architecture, all make the point as clear as possible: The soul cannot thrive in the absence of a garden. If you don't want paradise, you are not human; and if you are not human, you don't have a soul."
― Thomas More 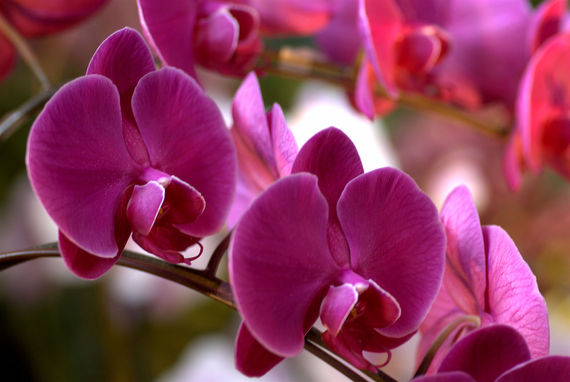 A quiet afternoon, a darkening sky. A comfortable seat by a window. In the background, Das Liede von der Erde, by Gustav Mahler. "The Song of the Earth." Six movements, for two singers, set to seven ancient Chinese poems that describe "nature's earthly beauty and transience." His "greatest symphony," written during one of the most difficult periods of his life, unfolds a musical journey through riverbanks and flowerbeds, shady trees and changing seasons.

In the middle of the little pond
stands a pavilion of green
and white porcelain.

We listen, and go on a journey of our own.

To a cedar forest atop Qadisha valley, one of the most important settlement sites of the first Christian monasteries. The antique forest is home to the last Cedrus lebani in the world, cited one hundred and three times in the Bible. A rich, spicy smell, thick barks, deep roots. Some of the trees are over three thousand years old; they outlived King Solomon, the Phoenicians, the ancient Egyptians. But without sufficient snow or rain, they may not survive the century.

Like the back of a tiger
arches the jade bridge
over to the pavilion.

To a crystal white landscape along the Ilulissat Icefjord, the largest moving glacier in the frozen Arctic seas. A magical and wild combination of rock, ice and sea, ruled by polar bears and reindeer. The glacier is a testament to the last ice age of the Quaternary Period; a vanishing window to a time vanished, literally melting away.

On the small pond's still
surface, everything shows
whimsical in mirror image.

To a warmer, balmier setting; two thousand nine hundred reefs inhabited by four hundred species of corals, one thousand five hundred species of fish, and several thousand species of mollusks; the Great Barrier Reef. Seagrass meadows roamed by dugongs and sea turtles, corals in every shade of pink. An underwater garden of colors, gradually being bleached.

Everything stands on its head
in the pavilion of green
and white porcelain.

To the Virunga national park in the Democratic Republic of the Congo, home to half of the world's remaining mountain gorillas, and the gardens of milkweed flowers in the North American Midwest, sanctuaries to endangered monarch butterflies. To the cobblestone streets of Venice and the white sandy shores of the Marshall Islands. To Machu Picchu in Peru, Serengeti in Tanzania.

Mahler's symphony explodes into color, as does our journey through the great many gardens of the world; the ten thousand species of orchids in the Amazon rainforest alone, the Selenicereus grandiflorus cactus that only blooms for a night, the eighty thousand violet Crocus sativus needed to harvest five hundred grams of saffron, the Synsepalum dulcificum whose berry turns any sour taste sweet.

Like a half-moon is the bridge
its arch upturned. Friends
well dressed, drinking, chatting.

These gardens, this nature predate us. Theirs is the world's premier economy; ours came second. Plants altered the planet's landscape, their flowers developed color to attract insects, and pollination eventually produced the fruit that kick-started the evolution of primates and eventually, us.

We cannot exist in a world without gardens. We literally were not meant to. Governments and industries are now drafting agreements to reign in temperature increases and regulate carbon emissions. Planting gardens on sidewalks in Paris and over garbage dumps in Tel Aviv. Generating electricity from trash in Magdeburg and drinking water from sewage in Windhoek. Pledging responsible mineral mining, fishing, cocoa, coffee, and vanilla bean farming. Turning a new leaf with the new year. Starting fresh.

Empress Elizabeth of Austria is rumored to once have said: "If you are ever sad, if life is cruel with you, seek refuge in nature. It will never disappoint you." A bouquet of fresh wild flowers; a sweet, ripe, strawberry; the smell of orange blossoms in May; an afternoon reading in the shade of a fig tree; looking up to a blue sky. It does not take speeches, international conferences and awareness campaigns, or the dwindling sound of Mahler's mandolin to make us realize that this is our battle too.

There is much we can do, much we should do. Let us install LED lamps and recycle wine bottles, buy hybrid vehicles and turn down the air conditioners, close the faucet and switch off the light. Let us start fresh.

But before we do, let us hear the music through. Then let us go outside, and plant a garden. As big or small as we like, as English or French as we feel. In our backyards or vegetable plots, up our walls or rooftops, on our balconies or window sills. Of no particular use, and for no particular reason than because it is beautiful. Let us inundate the world with gardens.

In mine, I would have New England light and overflowing flower pots. Ripe grape vines, daisies strewn all over the path. Citrus trees and fig trees, shrubs of gardenia and berries. Parsley, basil, and a little thyme. The smell of fresh lavender, and jasmine climbing up the walls. In it, I would have a picnic, to some Fred Astaire and a soft breeze.

"A garden to walk in and immensity to dream in--what more could he ask? A few flowers at his feet and above him the stars."
― Victor Hugo, Les Misérables

And perhaps a good book to read.