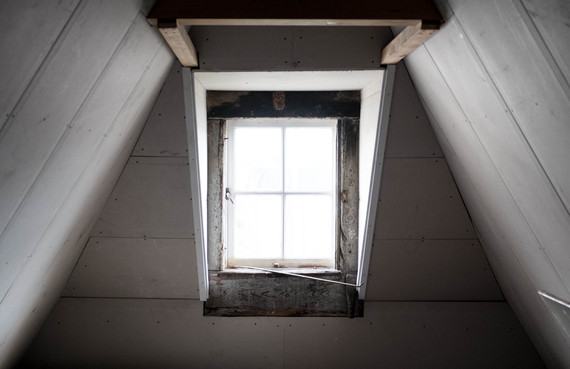 I can remember precisely when it hit me. I was staring out the window of my big, empty office, watching an even bigger home go up across the street. We were living in one of those up-and-coming neighborhoods, selected not for its charm, but for its potential increase in value. The fact that houses were being torn down and replaced was a selling feature, my fiancée said.

In principle, I agreed, but the atmosphere of destruction depressed me. All winter, while I struggled to set down words that would mean something to someone, somewhere, I'd looked over at what had been on that lot. It was a small, pink house that sat awkwardly on the street, a sloped-roof affair in a land of bungalows and stone McMansions. Its upper windows were left open to the elements, frozen curtains flapping in the wind, as if in capitulation, though the spray-painted markers and safety tape had already gone up by that time. Nothing and no one could save it.

On the outside, my life at 35 looked great -- a promising career, a doting partner, an elegant home, things, vacations, a big engagement ring, money in the bank.

There was just one problem: I wasn't happy. I was good at my work but I didn't believe in some of the fundamental aspects of what I was doing. I was invested in the idea of a partner I could share my life with, and yet I felt deeply alone.

The lies crept in softly. First it was a kind of sublimation, in the shaky 'trying my best' of my 20s -- well, that isn't exactly what I wanted, but that's probably close enough -- and into my 30s it became a momentum of "alrightness," of being okay. A sort of, "Hey, this is like what other people I know are doing," without a real consideration of whether it was right for me, or what a happier life would even look like.

And here's the secret: I got good at it. You get really, really good.

And then you wake up one morning and you pad into your office, and something in your line of sight has changed, and you have no idea who the hell you are or how you got there.

That's reductive, of course - - in reality there were myriad tiny realizations. But the sum was this: If you aren't honest with yourself -- cuttingly, painfully honest -- life can't be honest with you. I could not attract the deep understanding, the tenderness in a partner that I wanted and still want more than anything. I could not use my talents and insights to help the people and causes I care about, to effect the change I want to see. Not unless I was honest about who I am and what I want.

Walking away wasn't the hardest part, though it felt like it at the time. He followed me around the house as I threw my life into boxes. You can't leave me, he kept saying. Oh, but I could.

For the first time in my adult life, I was going to do what was right for me, without a complex inner negotiation, without a decimation of self. I did not want to marry this man -- no part of me did -- and if I couldn't find someone that every fiber of my being did want, someone I could deeply love and respect, I would rather live the rest of my life alone, with my ideas and my sense of self intact.

What I didn't realize at the time is that facing into our decisions is where the real work and the fear and the self-doubt begins. It's everything after the dramatic exit, the door slam, the (justified and unjustified) self-righteousness, the rolling down the street in a truck with nowhere to really go, realizing you've wasted time and there's no way to get it back. That the reason you don't have the things you wanted -- a loving husband, a family, a career that actually makes a dent in the world and will leave something after you're gone -- is you, your own shortcomings and your fear. And maybe you've missed the boat, entirely.

What I've described here is the decision to not "settle;" my experience is in no way special. But what's worrying, and worth pointing out, is that settling was like air -- except for brief punches of grief and despair that seemed to come out of nowhere, it didn't feel like anything at all. I had lied to myself so well -- in so many areas of my life -- it seemed natural, normal to just keep pressing forward until the memory of what I'd wanted was like a distant dream, faint and ridiculous.

But our dreams aren't ridiculous. In fact, they aren't really "dreams" at all.

They are who we are -- the most fundamental expression of ourselves as individuals, before the negotiations and the bullshit and the doubt pile up on us.

The specifics of why I veered so far from myself aren't important, except for this: I believe it's part of a pattern, one we can't fully see until the end of our lives. Of course, if we look, it's almost certain we'll find what we seek.

We'll see our triumphs and our failures in the context of the hands we were dealt. Regardless, I'm certain of this: If you are honest with yourself, no experience -- good or bad -- is ever truly wasted.

After walking away from a life I didn't want, I let go. I fell deeply and honestly in love for the first time in my life. It was short and brutal and he broke my heart -- he actually crushed me completely, for months I felt like I couldn't breathe -- but I saw the curve of what an honest love could be like. It's the most beautiful and breathtaking thing, to place yourself gently in the hands of another human that you respect and like, and ask for what you want: to be loved back, cherished, understood.

I see now that this is all part of my pattern, and so are the good things, too. I moved to a place I like. I deepened my friendships and made new ones. I embarked on a new career path, working with people who inspire me. I found the courage to start sharing my fiction -- the deepest held parts of me that I've been pushing down all my life.

It occurs to me that starting over was letting go, and letting go is a bit like prayer -- involuntary and also deliberate. You will get what you ask for, what your energy moves undeniably toward, the most desperately whispered desires of your heart. It's only that the answer might look like nothing you imagined.