In November 2012, the 31 year-old Syrian man Mohammad Hamwia left his home, in the city of Homs, Syria, for the last time.

The frequent bombings, the deafening noise of the machine guns and the blood-stained streets had already forced his mother Hana, his three brothers and three of his four sisters to seek refuge in Denmark, Dubai and the United States. They are among more than 4.8 million Syrian refugees now scattered across the globe, according to data from the UN's refugee agency.

During a brief cease-fire, Hamwia escaped to Lebanon, then to Dubai and then to Egypt, before landing in São Paulo. He was the only one in his family to move to Latin America. As he walked through the doors at Guarulhos International Airport, he realized that in a city of 12 million people, he knew absolutely no one.

One day -- I don't know when -- I will become a Brazilian citizen. And I want my country to be number one.

In Syria, months after the beginning of the revolution, the refugee says he witnessed the repressive forces of Bashar Al-Assad's regime turn stray cats into victims: "The government snipers shot the cats, saying they needed to practice," he said.

"If the police captured someone, they tortured them until they snitched about someone else. The prisoner eventually disclosed the name of some acquaintance that also opposed the government, and he got killed. That's how they kept capturing other people. And others. And so on," Hamwia said.

Hamwia holds a BA in English Literature and a Master's degree in Business Administration. He says he spent his final days in western Syria delivering milk and bread to children and babies -- an activity that had become incredibly difficult due to the siege.

"We had food suppliers, but they couldn't get where we were. So we had to go to these dangerous zones, get some food, and go back," recalls the Syrian. He reenacts the moves he used to dodge bullets, as if he were recounting a scene from an action movie. His friends were getting arrested, disappeared or killed. 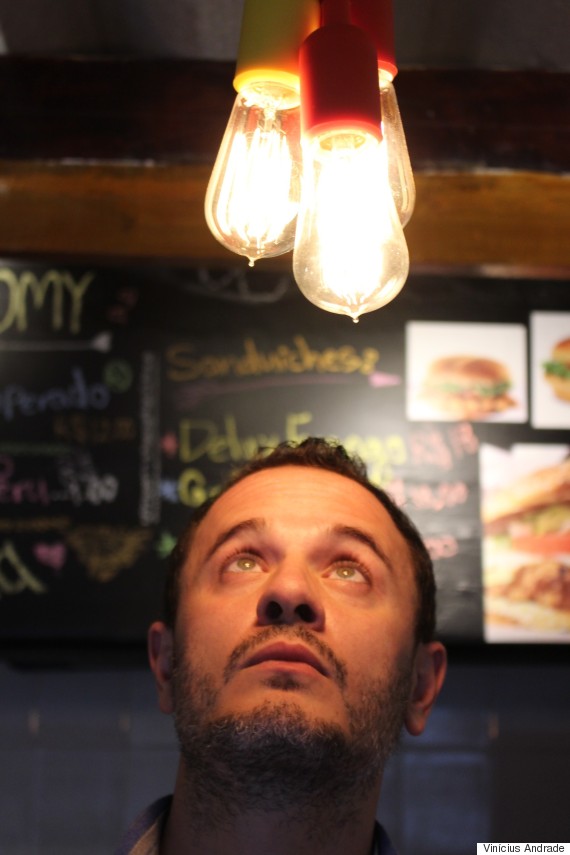 Sitting in front of his newly opened restaurant, in the west side of São Paulo, Mohammad Hamwia says that he now goes by the name Adam. His hair is thinning, his eyes are bright blue, and he is dressed in comfortable clothes.

He insists on showing us some pictures on his cellphone of his hometown across two different time periods. He pulled up pictures from before the war -- populated with impressive and elegant buildings. The pictures of Homs today, however, are of a fallen city. "Half the population left the country. The remaining people are still there, dying gradually," he said.

At 8.12 p.m. on a Monday in May, Adam serves a portion of buffalo wings to a customer as he shows us an image from Aleppo on his cellphone. Two children play in a bathtub -- the only object left intact among the wreckage. "Look at that, man. And they're still smiling," says the Syrian. 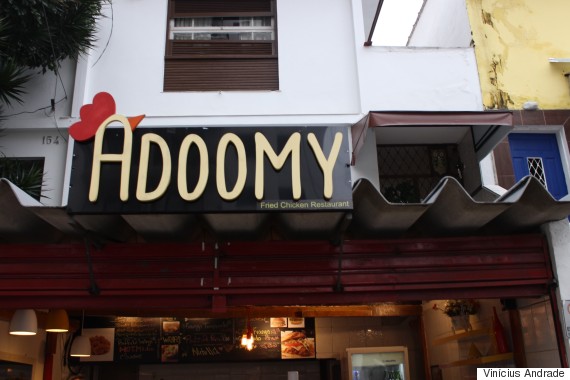 He chose São Paulo's Vila Madalena district to open his restaurant, Adoomy, in November of 2015. Why São Paulo? "The chances of finding a job here are much higher," he says.

Hamwia enjoys the city's nightlife. He has also made some good friends here, who have helped him out with logistics as he set up his restaurant.

Adam Hamwia wakes up at 8 a.m. sharp and spends the whole morning managing his small business, before he finally starts to cook: "I am also the restaurant's chief executive officer, chief financial officer, marketing director and press agent," he says.

With or without an economic crisis, people still have to go to restaurants.

He currently has only one Brazilian employee, who mainly works with him during peak hours. "I face a 'turnover' problem. Many people start working here and then they decide to quit," he says.

Nevertheless, he is determined to keep the restaurant open. "I have to keep operating because of the restaurant's image. People walk by, take a look and think: 'I will try some of the appetizers later.' This message will go into their subconscious."

Hamwia estimates that 140 people walk past his restaurant during lunch hours every day.

Calculating the number of potential clients, he says, "is an essential step in building any business" -- a lesson he learned when he worked for a consulting company in the Middle East. 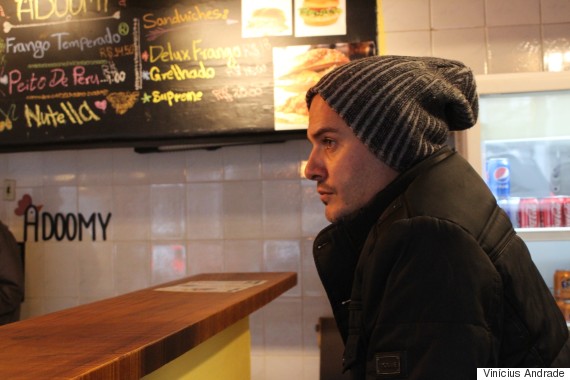 Even though he still has some difficulties with the language, he tries his best to address his customers in Portuguese. "When I first got here, I didn't even know how to say 'thank you' in Portuguese. I'm improving," he says joyfully.

Hamwia says he is finding it difficult to keep the prices low at his restaurant due to the ongoing recession in Brazil. "Obviously, I can't survive in this crisis for a long time," he says.

Right now, he is more concerned with spreading the word about his restaurant than with making big financial gains. "With or without an economic crisis, people still have to go to restaurants," he says hopefully.

Although his passion for cooking started when he was a child, the main inspiration behind Adoomy was the fried chicken Hamwia tried at a restaurant named Al Baik, in Saudi Arabia.

Hamwia says he couldn't find fried chicken of similar quality in Brazil. "In Curitiba, for instance, I visited six different places specialized in fried chicken. None of them were good," he says.

My city is much prettier than Itaim Bibi [an upper class district in São Paulo]. But everything I saw when I was a little boy is now destroyed.

He's very happy with the flavor, seasoning and texture of the chicken he's selling at his restaurant -- which is located on 150 Rodésia Street.

Adoomy moved from its first location -- the first floor of the building next door -- to this small garage, which consists of a tiny kitchen, a refrigerator and a cash register. Customers take their seats on wooden stools, and Hamwia often shares stories as they eat.

For lack of space, however, some dishes have to be prepared in the apartment on the first floor of the building next door, where Hamwia currently lives.

A young client plays with his phone as he waits for the order to get ready. A Canadian pop song blasts through the radio. Hamwia smokes three cigarettes during the interview, and pauses frequently to chat to a Syrian friend in Arabic.

"Sometimes I forget to sleep," he says. "It is not easy to have your own business. But sometimes, I think people aren't brave enough and just want easy jobs."

Hamwia feels optimistic and hopeful about his life in Brazil. "One day -- I don't know when -- I will become a Brazilian citizen. And I want my country to be number one," he says. Brazil has natural resources, water, wonderful places, why isn't this country number one already?" he asks.

He says his biggest dream is "to open other Adoomy franchises in Brazil and then around the world."

He says he would be homesick if his hometown was still intact. "My city is much prettier than Itaim Bibi [an upper class district in São Paulo]. But everything I saw when I was a little boy is now destroyed," he says.

Besides his family, with whom he communicates over WhatsApp, he misses his old friends. But Hamwia doesn't know if they are still alive. He says that those who stayed behind reached a point where the odds of staying alive were 50/50.