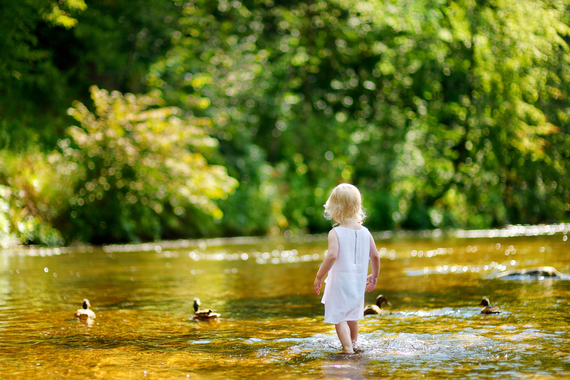 This weekend Americans will head to our local river for a float trip or fishing excursion, to our favorite lake for a refreshing swim, or to the beach to ride the waves and soak up the last of the summer sun.

Our enjoyment of these waterways will be particularly sweet over the next few days, not just because we'll mark one of the last hurrahs of the summer season, but also because our favorite rivers and lakes are now better protected from pollution than ever before.

Thanks to the Obama administration's Clean Water Rule that takes effect today (in most places), polluters can no longer dump into our streams and developers can no longer pave over our wetlands unheeded. Before today's rule, 2 million miles of streams and millions of acres of wetlands, which flow into our favorite waterways, from the Puget Sound to the Chesapeake Bay, had lacked clear safeguards under the Clean Water Act, following a pair of polluter driven lawsuits that went all the way to the Supreme Court in 2001 and 2006.

Court decisions in these two cases had left the streams and wetlands that feed our rivers, lakes, and the drinking water supplies for 1 in 3 Americans vulnerable to polluters and developers, who could use these waters as dumping grounds or pave over them without any federal oversight or limits. In fact, in a four-year period following the decisions, the U.S. Environmental Protection Agency had to drop more than 1500 investigations against polluters, according to one analysis by The New York Times. Similarly, an investigation by Pro Publica found oil companies and other polluters dumping into streams without consequence.

The Clean Water Rule, adopted in May following a decade-long push by Environment America and many others, ensures that such pollution cases can be prosecuted. On the front end, federal officials can now protect these waters with enforceable limits on pollution.

The joint rule by EPA and the U.S. Army Corps of Engineers is backed by robust scientific review and has gained broad support across a wide range of constituencies, including mayors, brewers, kayakers, anglers, small businesses, and small farmers.

The public strongly backs the rule. In May a Hart Research Associates poll showed that 80 percent of voters surveyed across party lines favored it. Americans submitted more than 800,000 comments in support of the restored protections.

Despite the public's backing of the Clean Water Rule, oil and gas companies, developers, and other polluters have waged a bitter campaign against it. Congress has largely sided with the polluters, with the U.S. House and key Senate committees passing bills to undo the restored protections.

Moreover, polluters and their allies have turned once again to the courts. Those bringing lawsuits against the Clean Water Rule now include Murray Energy (the largest privately held coal company in the U.S.), agribusiness interests, the U.S. Chamber of Commerce, and several state attorneys general.

Yesterday, a federal judge in North Dakota granted a motion to halt the rule in 13 states pending the outcome of litigation by their attorneys general. It's frustrating to see clean water delayed and denied to the people of these (mostly Western) states, including Colorado and New Mexico.

Yet we know that the Clean Water Rule is on solid legal ground and backed by more than 1,000 scientific studies showing how streams and wetlands are vital to the health of our rivers, lakes, and bays.

And so, with enough support from key senators and continued strong backing from the Obama administration, we're confident that the restored protections for our streams and rivers will survive and thrive. That way, our favorite places for swimming, boating, and fishing will be cleaner today, this weekend, and for many summers to come.