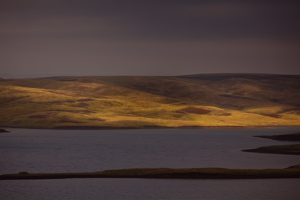 "The forthcoming book about the Cheyenne River Sioux Reservation dovetails beautifully with our interests," says Julie Garreau, executive director of Cheyenne River Youth Project, in the reservation's capital, Eagle Butte, South Dakota. The fine-art volume by writer Heather Steinberger, landscape photographer Richard Steinberger and portraitist Matt Normann will include tales from tribal elders who've visited the youth center under the auspices of its Circle of Storytellers program, as well as text from teenagers writing about life on the reservation. "The idea is to bring the Lakota oral tradition into the 21st century," Garreau says.

"We hope the book will show the world a different view of this reservation--and perhaps of Indian country as a whole," says Richard. When outsiders report on Indian reservations, they tend to focus on disaster and despair, explains Heather: "The stories can end up a collection of photo-ops, with desperation as the theme." 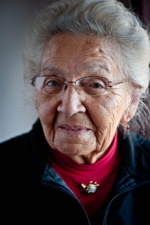 If you look more carefully, Heather continues, you see the community working to solve its issues. "We're not going to whitewash the hardships in our book, but we want to demonstrate to a wider audience that beauty, joy and hope can also be found. We'll show strong people and families, who care deeply for each other and love where they live. I've heard Julie say that if you want to 'save' Cheyenne River, you're wasting your time, but if you want to work with the community, you can be part of something worthwhile."

The Steinbergers, who live in Colorado, and Normann, who's from Wisconsin, meet in Eagle Butte every few months. "Everyone at Cheyenne River has been so welcoming," says Matt. "We haven't needed a 'fixer,' meaning the type of insider reporters or photographers might use to smooth their way into a community they don't know."

The project is inclusive. "Some settler families have been here for five generations," says Heather. "So in addition to depicting tribal members, we'll show ranchers and their lives." 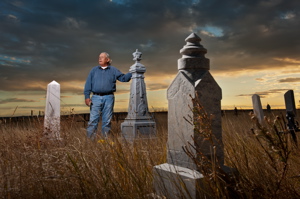 At top, Steinberger caught the sun breaking through the clouds after a thunderstorm; above, Normann portrays tribal elder Marcella LeBeau, who served as a nurse during World War II, including at the Battle of the Bulge; right, Normann shows environmental-studies professor and elder Jim Garrett in his family's cemetery. Says Normann: "When Jim put his hand on the tombstone, this connected him to his surroundings--as if his hand were on his great-grandfather's shoulder." (For more images and the photographers' comments on the techniques they used, see below.)

The photography will take place over a year--from August 2011 to September 2012, according to Richard, who says that an advantage of working over a long period is seeing the reservation in all seasons. "I recently came across an old homestead I know will be fantastic in mid-winter, when I can emphasize the stark contrasts of the building against the snow," he says. In other cases, he and Matt have agreed that a place will be even more beautiful in the lushness of springtime. Richard estimates they'll shoot about 100 images for every one eventually used. He and his collaborators are seeking a publisher, with the idea of having the book in stores by 2013. Fifty percent of sales will go to the Cheyenne River Youth Project; the remainder will defray production costs.

"We want everyone who sees this book to discover the beauty of this land and its people and to appreciate the stories that run deep here," Heather says. "We want to open your eyes, then your hearts."

Here's a sampling of the visuals, along with comments by the photographers: 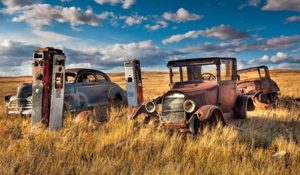 Richard: "Matt and I were driving around in our van when we came over a rise and spotted this scene--a kind of virtual gas station, complete with antique gas pumps. I slammed on the brakes, and we got out and asked the people living nearby what it was all about. They had an auto repair shop and junkyard, and the owner said his dad had lined up the cars years ago, just because he liked them that way." 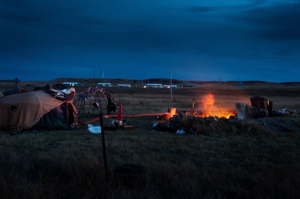 Matt: "In this 30-second exposure, taken before I entered the sweat, the long red streak shows red-hot rocks being carried from the fire to the lodge. What appears to be a flare above the fire is firelight reflecting off a man who is getting more rocks. Using a long exposure meant I could also bring out the houses in the background, which was important because it illustrated that community members are still living clustered together, as in the old days." 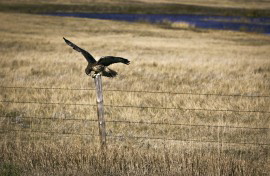 Richard: "This was a chance encounter. When we drive around, we keep our cameras in our laps in case we find something we want to react to immediately. I saw the hawk swoop down and pick something off the prairie, so I stopped, rolled down the window and got off two shots before it flew away with its mouse-lunch. For our next trip to Cheyenne River, we're going to rent a very long telephoto lens so we can get even closer on wild-animal images." 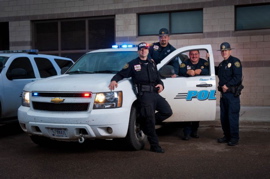 Matt: "In the book, we want to show people making a difference, like these tribal cops, who were about to start their Friday-night shift--usually a busy one for them. I didn't want to depict them as bad-asses with guns out, because their job is positive: making the community safer for everyone. I choreographed this image, running around and showing them where I wanted them to be, then asking who wanted each position. Also notice the vehicle, an indication of the kind of terrain they patrol."